Aviation, mankind's oldest dream, first became accessible to the general public in the 20th century. In just one hundred years, the modest first leaps have evolved into one of the most significant modes of transport, making every place on the globe accessible within 24 hours.

Helsinki-Malmi Airport's thriving community of flying schools, aviation clubs, companies doing aviation work and maintenance and repair businesses supporting them is a unique and historic cluster of aviation tradition and know-how in Finland. Its unbroken evolution extends from the airport's early era in the 1930s to the present day. The versatile aviation activities at Malmi make it one of the busiest airports in Finland by operations. Malmi is a unique, large and diverse aviation community in Finland, passing unwritten aviation wisdom, tradition, history and the principles of good airmanship from one generation of aviators and aviation enthusiasts to the next.

At the core of Malmi's aviation tradition is passing on the aviation-related know-how, good practices and tradition in the context of actual aviation and pilot training. In addition, the community takes care of the airport's operational preconditions, cherishes its historical milieu, collects and records anecdotes and oral tradition and communicates the cultural heritage to the enthusiastic general public. 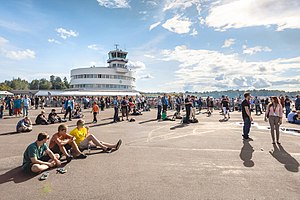 Intangible aviation heritage and the tradition globally known as good airmanship contains a substantial amount of oral information not written down in textbooks. Lessons learned the hard way in the pioneering days of aviation, such as "in a forced landing, close the fuel valve and turn off the mains switch before ground contact" have made their way also to written aviation tradition, but a vast amount of practical knowledge improving safety and everyday practising of aviation is still passed from one generation to the next by word of mouth, e.g. "showing the landing lights for a short time makes you easier to detect for an oncoming aircraft."

More than one third of all pilot's license holders in Finland live in the capital region. This makes the aviation community of Malmi Airport the beating heart of Finnish general aviation. It brings joy and inspiration also to the general public in regular airshows and other events that typically draw tens of thousands of spectators.

The roots of the aviation tradition of Helsinki-Malmi Airport are in the 1930s, when its first aviation schools opened for business. The Second World War cut short their early success and expansion, but in the Continuation War from 1941 onwards the airport served both scheduled traffic and military aviation until September 1944, when the Allied Control Commission took it over after Finland broke away from the war. The airport was returned to Finnish control on 5 January 1947, and its heyday as the international airport of the Finnish capital reached its pinnacle in the early 1950s.

In that era, Malmi Airport became the home of many significant aviation and aircraft maintenance businesses, importers and sales representatives of aircraft and avionics ase well as numerous aviation clubs and flying schools. This laid the groundwork for the airport's planned new role as the capital's general aviation centre after scheduled traffic moved to the new Helsinki-Vantaa Airport in 1952.

Over decades, generations of student pilots, instructors, private aviators, flight captains, military aviators and mechanics have waited for the morning fog to clear at Malmi's historic hangar or in the terminal's restaurant over a cup of coffee, passing on good airmanship, oral aviation tradition and the airport's history, customs, incidents and anecdotes. The oldest flying schools still operating at Malmi opened for business in the 1960s, and the aviation community of Malmi Airport is one of the most significant pilot training centres in Finland.

The rich history and traditions of Malmi Airport, cherished and passed on by its aviation community, continue unbroken to the present day on this airport that has survived almost perfectly in its original shape and size and has a heritage that covers 3/4 of the world history of heavier-than-air aviation. 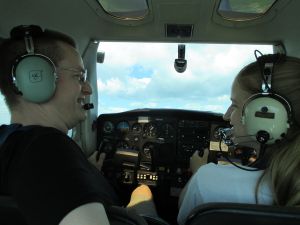 Malmi's aviation tradition is passed on in the same way it always was: by being together and doing together. The oral tradition, good airmanship, history and anecdotes are passed on and accumulated from one generation to the next, and also spread to the knowledge of the general public, especially making use of the possibilities provided by modern means of communication. From one year and decade to the next, the "bite of the aviation fly" continues to bring new generations to join Malmi's aviation tradition.

The fast progress of new aviation technologies, such as electric aircraft and intelligent unmanned cargo-carrying solutions, provide the aviation community of Malmi Airport with an excellent chance to thrive and develop in the future. Passing living tradition, history and good aviation practices on to new generations continues. Malmi is the only free-schedule international airport in the capital region, and with its comprehensive pilot training and aircraft rental services and numerous aviation clubs it keeps alive the dream of aviation for more than a million people. There is no doubt of the vitality and future of its aviation community and tradition if the preconditions of general aviation are preserved. That future is threatened, though, by City of Helsinki's plans to close down the historic airfield and turn its Built Cultural Environment of National Significance into a residential area. 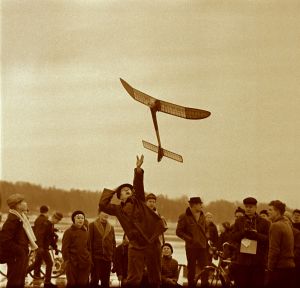 A model plane event at Malmi Airport in the early 1960s. Enthusiastic model plane activity has inspired the youth to join Malmi's aviation community already when the airport was still under construction in the 1930s. Photo: Matti Korjula