At Euran Pirtti, designed by Jalmari Karhula and constructed in 1908, several thousands of twists are made annually by volunteers. These baked goods made at Euran Pirtti are the true Eura twists, because Mari Vahe, who originally popularised them, was the sister of Helvi Nuoranne’s grandmother, and it was Helvi who introduced this original recipe at Euran Pirtti, which was built for the local youth association. 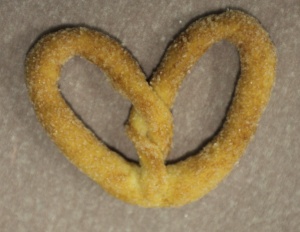 An Eura twist. Photo: Jorma Pihlava 2015, the picture collection of the Municipality of Eura’s cultural services.

Twists are baked at Pirtti to order, as well as for sale at various events, such as the local heritage days and the Christmas market. The popularity of Eura twists in the area is evident in the fact that there is always a queue at Pirtti’s sale and every last one of the twists will be sold. The proceeds from the twists sales are used to support Pirtti’s operations. Many people also bake these treats at home. The Eura twist is known as Satakunta’s regional delicacy. Baked goods of the same name are produced all around Finland, but they differ significantly from the original Eura recipe. 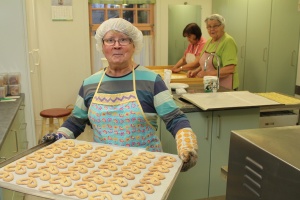 ‘Everyone knows the Eura twist, that crusty, sweet and traditionally fox-brown pastry,’ a brochure called Euralainen tyky-elämys states, describing the twists. The Eura twist is a traditional pastry from Eura, and has been chosen as the provincial delicacy of Satakunta. These twists are often included in the menus at celebrations. They have remained popular for over a hundred years. The twist baking tradition at Euran Pirtti remains strong, and many people also make them at home.

Every baker has their own twist recipe. They are fairly similar, sharing the same ingredients, but many differences also exist. For a long time, the twist recipe was kept a secret. Therefore, it cannot be found in any of the older cookbooks. Currently, the recipe is widely used, and several versions of it have been published in Lounaissatakuntalaisten pitokokkien parhaita, a cookbook listing the most popular recipes from southwestern Satakunta. However, many private individuals still wish to keep their recipes secret, at least half-seriously.

If you want your Eura twists to be airy, crusty and tasty, you must work the dough carefully and meticulously. The more you knead the dough, the chewier the twists become, so if you want your twists to be as airy and light as possible, kneading must be kept to a minimum. Also, adding too much flour will make the twists hard. In order to have as even and beautiful pastries as possible, the stick of dough must be exactly 33 cm long and rolled to an even form with fingers. A piece of roughly the size of a plum, 11 grams of dough, will make a stick of a suitable length.

The baking surface material needs to be wood for rolling the twists. No flour must be sprinkled on the baking surface. The stick is slowly and carefully rolled in sugar, turned into a twist, placed on an oven tray and baked until fox-brown. The shapes of twists vary, and sometimes mock arguments arise on whose version is the right one.

The exact origin of the recipe is unknown, because no written document exists. According to one story, a Russian baker brought the recipe with him to Eura where he opened a shop in 1879. Some years later, a cook from Eura, named Mari Vahe (born 1862), discovered the recipe and popularised this delicacy. Other cooks in the area also began baking these twists, originally called ‘Mari’s treats’. Soon, they came to be known as Eura twists. The twists became a popular food served at celebrations and an integral companion to coffee at important events. That was over a hundred years ago, and the twists still remain as popular as ever.

According to legend, the fragrance of these twists would attract men, in particular, who would enter the house and be given a taste, if they asked politely. The wonderful scent of the twists had wafted all the way outside. 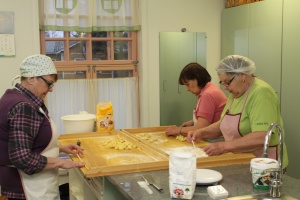 The baking tradition of the Eura twists is currently being continued by the younger generations, as these regional delicacies are also made in home economics class at schools in Eura. Traditional cuisine days are held at Euran Pirtti, and the participants at these events can bake Eura twists themselves and hear stories behind the tradition. In addition, local work communities can have their recreational days at Euran Pirtti under the theme ‘joy from baking together’. 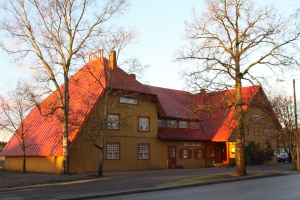 Euran Pirtti is a popular travel destination, especially amongst tour groups. Visitors at Pirtti are offered Eura twists, accompanied by stories about their history. This is one of the ways in which the tradition is being passed on.

In addition, the tradition has retained its vitality within families, when the secret Eura twist recipes have been transferred from generation to generation.

Coffee roastery Paulig made a video in 2014 about the baking process of the Eura twist when the twists were chosen as the provincial delicacy of Satakunta. In the video, the ‘Paulig Girl’ visits Euran Pirtti to learn about the making of the traditional delicacy.

A large number of cultural and art-related services in Eura, promoting occupational well-being, have been listed in the Euralainen tyky-elämys brochure. One of the services is Eura twist baking at Euran Pirtti.

The tradition of the Eura twist remains strong in the region. The Eura twist is one of the municipality’s symbols. Its shape is referred to in several contexts. For example, jewellery artist Mary Syrén produces a set of jewellery based on the Eura twist, which includes earrings and a pendant. The volunteering tradition remains strong at Euran Pirtti and is likely to continue to do so in the future, because of the large number of enthusiastic volunteer bakers.