Wooden clinker boats have been a familiar sight in Finland for centuries, both on inland waters and at sea. In its various forms, they have been an irreplaceable mode of transport in the ‘Land of a Thousand Lakes’ and an essential element in the fishing tradition. To this day, the clinker boat is cherished and appreciated by the entire population, but the continuation of the building tradition is by no means a certainty.

Clinker boats are made by professional boatbuilders, active hobbyists and students in the field. In Finland, boatbuilding can be studied in a variety of institutions, but numbers have seen a constant downward trend. The majority of the students are usually men, and the percentage of adult students is high. Similarly, almost all of the actual professionals are male. The proportion of young professionals is low. 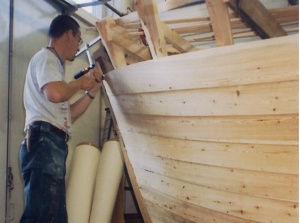 Two primary methods are known for planking a wooden boat. In a carvel-built boat, the long edges of the planks are fitted evenly against each other to form a smooth seam on the side of the boat. In a clinker-built boat, the lower inside lip of the upper plank overlaps slightly with the upper section of the lower plank. To make a tight seam, a varying-angle bevel is planed in the outer surface to ensure that the upper board fits snugly against its counterpart. Short bevels are also planed at the ends of the planks so that the entire width of the plank ends settles flush at the stem rabbet and transom. In a clinker structure, the long seams of the boards are fastened with flat clench nails which are clinched or riveted. Fastening can be made with copper nails and washers, too.

If the planking is made of plywood planks, the seams can also be glued with two-component epoxy adhesives, for example, in which case no other fasteners are required. A properly fitted seam does not necessarily require sealing. The seams can be sealed with either cotton string run longitudinally along the seam, or with modern adhesive compounds. The traditional sealing methods have also included tar and animal fur. In a carvel structure, the planks are attached to the frames which are installed by the use of molds. In a clinker boat, the frames are installed once the planking is in place. The steam bent frames are made of oak or ash, for example. They are softened in a special steam box, a pasu, into which hot steam is led (‘pasuttaminen’). After this the frames are bent and pressed into place. Sometimes, frames have also been manufactured from the trunks of fresh spruce saplings or juniper. In modern boatbuilding, frames made of glued plies laminated into shape can also be used.

The bent frames are installed in such a way that they run across the seams inside the planking. They are usually fastened in place with rivets. The frames do not support the planks laterally. Sawn frames, which are rigid frames manufactured from solid wood, can also be used to construct framing. Sawn frames are fitted against the planking inside the boat to conform exactly to the shape and support the planks in the lateral direction as well. The frames are usually attached to the planking with screws or nails. Wooden dowels have also been used to attach them. Clinker boats are typically built on molds. Traditional boats have also been built freely without templates.

The planks of a clinker boat are usually pine, spruce or aspen. Boats are also made from plywood planks, in which case it is necessary to extend their length by means of gluing, for example, since standard plywood boards are usually too short for planking. The latest material application is the Finnish Vendia boat plank. 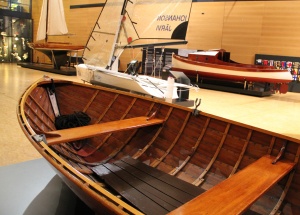 A testament to the clinker boat’s status in Finnish culture is the fact that, with the exception of the bow, it is the only man-made item depicted in centuries-old cave drawings and paintings. The first evidence of using boats can be found in Stone Age paintings dating back some 5,000 years. Some paddles and carved flat-bottom boats from the Stone Age have been found in Finland, but the actual boat discoveries are less than a thousand years old.

In a country such as Finland that is strewn with lakes and other water systems, a boat enabled wide-ranging mobility. The clinker boat was developed from the early flat-bottom boat made from aspen (‘haapio’). This type of boat was made from the trunk of an aspen tree by carving and expanding the trunk with heat. The sides were elevated and the capacity increased by installing additional planks on the hull. Gradually, the proportion of the trunk forming the hull decreased while the number of siding planks increased. In addition to using metal nails, the planks were in a way sewn together with thin tree roots or leather strips. A sown boat made between 1025 and 1065 BC was discovered in Hartola area, for example.

In Finland, the shape and design of boats has tended to depend on geographical location and purpose of use. The width, depth and length of the hull has been adjusted by changing the number of plank pairs and varying their width. The width of the stern has ranged from a wide and straight transom to a fully pointed stern. Generally speaking, boats which have been used at sea are wider and deeper than boats made for lakes and rivers. The stern of a boat at sea area can be pointed or have a flat transom. The river boats used in Northern Finland are usually long and narrow, and consist of three plank pairs. The boats in the lake regions fall somewhere in between. In other words, boat designs differ depending on whether they are used at sea or on lakes or rivers. The spreading of outboard motors has also affected the carrying capacity of the stern and the shape of the transom.

Boat building used to be a much more common skill than it is nowadays. In the archipelago area during the 19th and 20th centuries, for example, nearly every household had someone who could make a boat for personal use. There were also plenty of professional boatbuilders around the country. The clinker method is generally regarded as a northern European boat and shipbuilding method. It has been used to make larger vessels as well, such as Viking ships and cogs in the Middle Ages.

There are currently three educational institutions in Finland that teach wooden boat building. At present, Vocational College Livia is the only institute in Finland that offers vocational training in the building of a wooden boat (scope 150 credits). During the training, the basic techniques of traditional boat building, modern wooden boat construction and carpentry needed to decorate boats are learned. Much of the training and graduation consists of project work. The study takes place as full-time study at the Livia College of Fisheries and the Environment in Parainen in cooperation with the Turku Vocational College Foundation (TAO). Degree training in the field of boatbuilding is also offered by TAO to professionals working in the field for those who do not yet have a vocational or specialist qualification. In addition, it is possible to complete degrees with an apprenticeship. The training and examinations to be completed range from a boat builder’s course of about a year to an artisan degree of more than two years, to basic, vocational and specialist degrees, the length of which is determined when drawing up a personal competence development plan (HOKS). Thus, professional qualifications and special professional qualifications in boatbuilding that require previous training or experience are also available. Eurajoki Christian College offers year-long courses for enthusiasts in the field. In addition, civic colleges across Finland organize courses in boat sculpture, such as the Tradition Center in Kuggom in Loviisa and Kuopio.

At present, boatbuilding education and information on how to build a clinker boat is fairly widely available. Clinker boats are usually no more than six metres long and quite simple in terms of their structure. Building one does not require a lot of space. Some special tools are needed, but most of them can be made by builder himself. Wood is currently available but in the long term, getting sufficiently large high-quality wood may become more difficult. For example, pine, which is best for planking, has grown in mixed forests for some 150 years. Obtaining this type of wood from modern commercial forests is not always possible.

The boatbuilding tradition may also change. In time, old and traditional boatbuilding methods may be preserved as nothing more than documents in museum archives. New materials enable different ways of making clinker boats. High-quality plywood made from turned veneer and durable glue enables the construction of light and durable boats. For example, it is possible to minimise the quantity of frames required, even if the boat is otherwise made with the clinker method. New materials and structures can also reduce the time and effort spent on boat maintenance. The Finnish company Vendia Woods has developed the Vendia marine plank, which has been featured in foreign professional magazines in the field. Regular plywood is made of turned veneer, but the Vendia planks consist of glued ply sheets and the external surfaces follow the grain in the longitudinal direction. The Vendia planks combine the consistent quality and ease of use of plywood with the appearance of solid wood planks.

Some hobbyists build clinker boats for personal use. In terms of preserving the tradition, however, the most important question is whether or not professional boatbuilders will continue to have enough customers who want a hand-made wooden boat.

Finland is part of the nomination process of Nordic clinkerboat traditions to be inscpibed into UNESCO’s Representative List of the Intangible Cultural Heritage of Humanity. Decision is expevted in mid-December 2021. A total of 19 Finnish communities operating in the field support the submission of the nomination. The inscription will be the first multinational nomination of all Nordic countries.