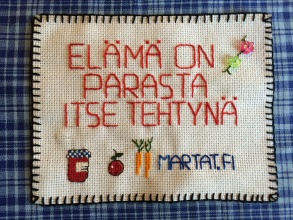 The Craft Martha (‘kässämartta’) activities are volunteer craft activities with the goal of doing things together, learning new skills, passing traditions on, and teaching skills to other people. The activities started in the Uusimaa region, but today, there are Craft Martha groups in different parts of Finland. In 2015, the Craft Marthas organised 200 events, with more than 5,000 participants. There were 293 Craft Marthas actively involved, and 750 people subscribed to the craft newsletter.

The primary target group of Craft Marthas is the members of the Martha Organisation regardless of their crafts skills, but the activities are open to anyone who is interested. You can come to Craft Martha meetings to study and learn. Even people who are more advanced in their hobby can find new ideas and stimuli, and they also have the opportunity to share their skills with others. One of the goals is implementing the principle of training chains, meaning that the participants of Craft Martha meetings would teach the things they have learnt during the Martha evenings of their own organisations as well as in other events to others.

The main form of Craft Martha activities is the Craft Café (‘Kässäkahvila’) that meets once per month. Its themes have included different kinds of knitting and crochet techniques, using recycled materials, traditional crafts, and lectures by visiting experts. As a rule, the instructors are volunteer Marthas.

Within the framework of Craft Martha activities, people have participated in several charity campaigns and drives, such as knitting socks for the homeless, making shawls for old people’s homes, and knitting baby hats. Information about the activities is sent via e-mail, and it is published on the blog and the Facebook group. The materials distributed at the events are free to use. 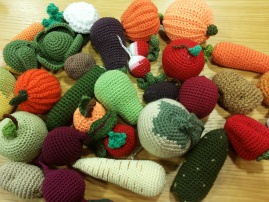 Knitted fruit and vegetables for children in kindergartens.

The first ideas and trials related to a craft club started in the autumn of 2007 in the Uusimaa district of the Martha Organisation. However, the organised craft activities under the Craft Martha name only started in 2009 with the baby sock campaign in honour of the Marthas’ 110th anniversary year. Several events were held in 2009 in the Uusimaa district’s facilities, where people were instructed on how to knit baby socks. These events were enormously popular. The meetings in the autumn of 2009 also had other themes, such as knitting patches for blankets. 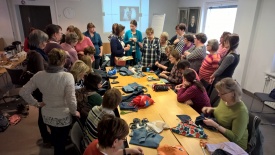 Recycled jeans got a new life in Craft Café in April 2015.