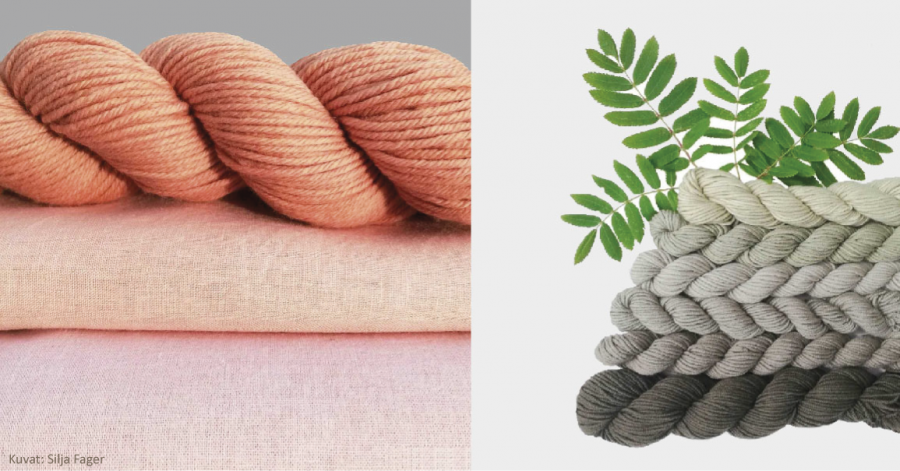 Natural dyes and dyeing are part of the Finnish craft culture and tradition that has been practiced for centuries. In Finland the society was long self-supporting and early industrialization was relatively slow. In an agricultural society craft skills were highly valued. Utility articles, also textiles, were mainly produced at home and dyeing was an important part of the textile making process.

Synthetic dyes came along at the end of the 19th century so before that dyes originating from nature were the only options to dye textile fibers. In Finland craft skills have been appreciated and because of the large number of crafts enthusiasts the tradition of dyeing and the know-how related to it has remained vivid until these days. Crafts enthusiasts all around Finland practise natural dyeing. Also craft entrepreneurs and artists dye with natural colorants and in that way utilize the skills in their activities.

In school education, natural colorants and dyeing offer a versatile topic that can be approached from the problem based learning point of view and as a study project combining different subjects. Dyeing with natural colorants is taught in basic education as well as adult education. The tradition of dyeing with natural colorants has remained vivid and passed on to the younger generations not only because of oral know-how but also because the dyeing instructions were published in newspapers, magazines and books at a very early stage. In addition, the skills have been spread and maintained through counselling and courses organized by different women’s organizations, especially during the recession eras of the early 20th century.

Nowadays dyeing with natural colorants is carried out in many different ways and methods and the dyes used can be varied and developed endlessly.

The aim in dyeing can be to follow the old recipes. In such case, one uses dye plants already known from the past and tries to dye according to the old, sometimes complicated methods. For example the Finnish Dyers’ Guild members participate in medieval markets wearing their colourful dresses and organize dyeing spectacles and sell dyed yarns.

When dyeing one can use either indigenous dye plants or foreign imported dyes. The use of natural mordants instead of metal salts is a more environmentally friendly way of dyeing and requires a two-staged dyeing process.

The methods for natural dyeing have developed and new equipment unusual for traditional dyeing recipes - such as a microwave oven - have found their place in the process. Foreign recipes and methods have been applied to domestic conditions and indigenous dye plants.

One of the applications is contact dyeing in which it is possible to make a pattern on fabric by transposing plant dyes for example from leaves and flowers straight on the fabric. Natural colorants are used not only for dyeing but also for printing textiles with various methods. 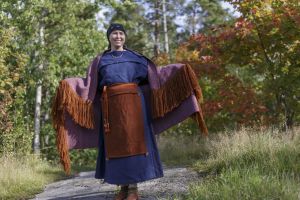 Blue from indigo, red from madder and fermented buckthorn, and purple from vat dyed blistered toadskin lichen (Lasallia pustulata) in a reinterpreted version of an Iron Age costume based on the  textile fragments found from a grave in Kaarina Kirkkomäki. Photo: Jouko Markkanen

The knowledge of Finnish dyeing tradition dates back to the oldest textile findings which are mainly from the late Iron Age, about 800-1300 AD. Due to the fact that textile as organic matter decomposes easily and on the other hand the tradition to burn the deceased with their clothes, there are only a low number of preserved textile fragments found.

Research shows that the main material for dyeing was wool and it was dyed with dye plants found in the nature. The dyeing methods used during the Iron Age have required long dyeing times because of low dyeing temperatures. The dyeing methods used during the Iron Age have been vat dyeing, mordant dyeing with natural mordants and fermentation when dyeing with tannins. The use of alum as a mordant and dyeing with boiling method became more common during the Middle Ages (ca. 1200-1500 AD). Cotton has been almost exclusively imported as dyed yarn or fabric. Dyes such as indigo and madder, have also been imported to Finland already at an early stage.

The colours in textiles were created by using three different dye baths: blue, red and yellow. Other colours were obtained with double dyeing, i.e. dyeing colours on top of each other in different ways, for example yellow and blue to obtain green, and red and blue to obtain purple. The making of textiles in the old days. Different colours were dyed in different times of the year. The colours received depended on the growth period of the particular plant. Picture: Riikka Räisänen.

The dyeing skills have been passed on from one generation to another largely through oral heritage but information about good dye plants and dyeing recipes have also been written down and published in books, newspaper and magazine articles or simple recipe booklets which have been handed over to the next generations. The oldest dyeing book written in Finnish was published in 1905 by Kansanvalistusseura (The Finnish Lifelong Learning Foundation). The booklet was written by Alina Hellén and is called Neuvoja kotivärjäykseen kasviaineilla (Instructions for dyeing at home with plants). There are around ten instruction manuals of natural dyeing written in Finnish and they have been reprinted several times. Natural colorants and dyeing have also been studied from the perspectives of history and dyeing tradition as well as new applications. There are two doctoral dissertations about the theme (Räisänen 2002 and Vajanto 2016) and many theses made in different universities and educational institutions.

Dyeing skills are passed on also through teaching. Teaching of dyeing with natural colorants starts already from the primary school and is carried out in different institutions providing craftsmanship. Information is shared actively among enthusiasts in numerous social media channels like Facebook, Instagram and Pinterest.

The future of dyeing with natural colorants looks bright. There is a growing number of dyeing enthusiasts and people, who are interested in the topic. Every year The Finnish Dyers’ Guild arranges a dyeing event called Värjäripäivät (Dyer’s Days). During the event The Guild offers a scheduled program with lectures, workshops and dyeing sessions. The Finnish Dyers’ Guild also has regional clubs around the country, which arrange dyeing events and other program. There are also operators which arrange courses on botanical and fungal dyeing: for example private educators, educational institutions and different kinds of organizations and associations. Dyeing with natural colorants is taught widely in different educational institutions from primary school to university level as well as in adult education and among enthusiasts.

Natural colorants are a topical issue and there is a growing interest for their larger-scale utilization in various circular economy applications. The ongoing interdisciplinary research project BioColour (https://biocolour.fi), which has researchers from Finland, The United States of America and Brazil, is an example of that. The aim of the BioColour project is to find new, sustainable dye sources and production methods for the needs of the dyeing industry. The research makes use of cultivated dye plants, microbes as well as forest and food industry side streams.

Instructions for dyeing with natural dyes (also in English): riihivilla.blogspot.com

Studies on dyeing with natural colorants: