The Ostrobothnian Easter bonfire tradition has been, and still is, practised in its core regions of Central, Southern and Northern Ostrobothnia. The tradition is kept alive by lighting small building or family-specific fires and organising local village festivities with common village bonfires. When building family bonfires, everyone can join the men of the house in the work, even children. These days, village associations and other organisations, such as farmers’ associations and sports clubs, organise village bonfire events, keeping the tradition of communal work alive. The bonfire squares are meeting places for people of all ages, where they can see their friends and socialise with each other. Everyone is welcome to the bonfire, including people driving in from further away to see the fire. The Easter fire tradition is still alive among people of all ages, and it has found new communal forms, for example in the operations of village associations. 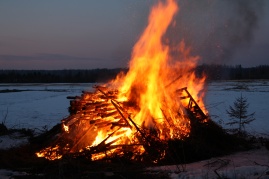 The Easter fire tradition is still a living folk tradition in Central, Southern and Northern Ostrobothnia. Family bonfires are usually lit in the early evening and the village bonfires a little later. Building bonfires and collecting materials for them is often started weeks before the night that the fires are lit on; however, the bonfire is not built until in the morning of the day it is lit or a few days before lighting it on Holy Saturday. Often, the villagers sell coffee and hot sausages near the bonfire and hold raffles. Trullis – small children dressed as Easter witches – are given a small reward for attending the bonfire celebrations. The Easter bonfire tradition is maintained among people of all ages through the participation in building the bonfire, gathering around it, seeing friends and socialising and spending time among family or with the villagers and people passing by. When the bonfires are burning, the people talk about the traditional beliefs related to bonfires and trullis, passing them on. Trullis are still a part of the Ostrobothnian Easter, as the children go from house to house dressed as witches. 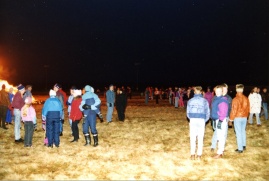 Large regional bonfire event at Ylivieska racetrack at the beginning of 1990s. People of all ages have gathered around the bonfire. Photo: Johanna Junno.

Three different forms of this tradition have been identified: family or building-specific, smaller bonfires, i.e. so-called family bonfires; village bonfires; and regional bonfires. In the 1990s, all three forms of this tradition were still present. In the 2000s, the large regional bonfires have mostly disappeared and they have been replaced by village bonfires, which are built and lit by village associations and other organisations through communal work.

The large bonfires were lit, for example, at Keskinen horse racetrack in Ylivieska in the 1990s, when the bonfire attracted crowds of up to 4,000 visitors. This was an hours-long bonfire event with different programmes, such as a trulli-witch competition and a horse race, as well as coffee canteens and raffles, and the event was crowned by lighting the bonfire. People from the surrounding 100 km or so area came together at the large bonfire.

During the evening and night of Holy Saturday, people drive by car to see the bonfires, and sometimes they stop at a bonfire to meet the people and admire the fire. 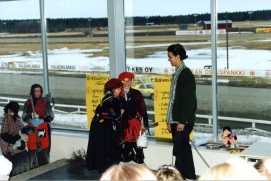 The trulli and witch competitions of village bonfires attract children and the young at heart alike, and they are one of the event’s fun and lively parts even today. Trulli competitions are playful show competitions for trullis, where usually all participants receive a small reward. In the 1990s, a trulli competition was held in connection with the regional bonfire in Ylivieska. In the competition, children dressed up as Easter witches performed little shows for the public. The trullis were interviewed and they presented themselves and maybe performed a song or a dance. Playful beauty or ugliness competitions, for example, have been held at the village bonfires. In Easter 2016, for example, there was a woman dressed as a trulli at Raudaskylä village bonfire, who gave out candy from a basket she was holding and wished everyone happy Easter.

The tradition of lighting Easter fires has a history of several hundred years. Fires have been a part of festivals related to different phases of the year and calendarial celebrations in different parts of Europe. Bonfires are also lit on Shrove Tuesday, Midsummer’s Eve and May Day, as well as during spring and harvest feasts, all of which can still be seen in some places. In the old traditions, bonfires have been either harvest or banishment fires. The oldest bonfire traditions probably date back to pre-Christian times. The Easter fire tradition in Ostrobothnia has some resemblance to the witch banishing fires in Southern Sweden and Southern Europe. In the Ostrobothnia region, Easter fires, ‘valkia’ by their Southern Ostrobothnian name, became an established part of the celebrations in the 18th century. Beliefs related to the harvest year have been connected to the bonfires and they have been burned on the fields in the belief that the smoke and ash would guarantee a plentiful harvest. In addition to this, there are several beliefs about Easter bonfires that are related to their abilities to repel witches and banish evil. It was believed that witches and trullis were unable to fly because they could not see through the smoke and that trullis were afraid of living fire. Furthermore, fire has universal, symbolic significance as a protective, purifying element. 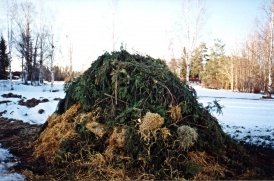 An Easter bonfire is made of authentic bonfire materials, such as straw and evergreen branches. Photo: Johanna Junno.

In Finland, at least in Ostrobothnia, jealous ‘witches’ visited the stables of their neighbours after war times and as late as in the 1960s, doing some mischief to the cattle. During Lent, and especially on Holy Saturday, these ‘witches’ cut off hair from cows’ tails or sheared some wool off sheep. Behind this tradition was an old belief, according to which there is only a certain, limited amount of goodness in the world, and you had to steal some from someone else so that there was enough for you. Easter bonfires were lit to banish or reveal these mischief-makers. Other magical measures were also used for protection against evil. Bonfires were also lit to celebrate the event. Before, Easter bonfires were mainly intended for the young people and they were venues for socialising and meeting each other. Today, lighting bonfires is a celebration for the entire village where everyone is welcome, even passers-by.

The Easter bonfire tradition is repeated every year around Southern and Central Ostrobothnia. Different parties build and light the bonfires. When the fires are burning, people tell stories about the traditional beliefs related to them, passing on the oral tradition that is an essential part of the bonfires. Burning bonfires is a tradition and established habit that has been maintained for several centuries.

The tradition is passed on to children through family bonfires and to people of all ages through village bonfires. Building the bonfires through communal work with, for example, village and farming associations and sports societies is also a form of modern communality. The bonfire squares are meeting places for people of all ages, where they can see their friends and socialise with each other. Everyone is welcome to the bonfire, including people driving in from further away to see the fire. Bonfire events are open and public in nature. There are advertisements about the bonfires in magazines and media, so the public is notified of the events.

Lighting Easter bonfires is a habit and an annual ritual with communal approval. The folk belief and livelihood magic backgrounds related to agrarian culture are still present in the Easter fire tradition and its oral traditions. The history of bonfires is shared and the different generations come together to remember their experiences of both old and new forms of the tradition. The media also bring up these. 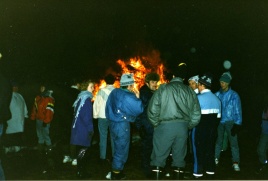 Village bonfire in Järvikylä, Sievi, at the beginning of 1990s. Photo: Johanna Junno.

The bonfire tradition reinforces communal feeling and identity, but also entrepreneurship, capability and vitality of the villages. Today, small trulli-witches are invited to the bonfire events, whereas before the bonfires were used to repel witches. Witches have kept their place in the bonfire tradition of today. The mischief done by jealous adults in the past has transformed into a children’s tradition with costumes and going from house to house. The small witches tour the neighbourhood on the morning of Holy Saturday, carrying coffee pots, and it is important that the neighbours have some treats to give them, as it is a bad omen for the house if they cannot reward them with anything.

The Easter bonfire tradition is still going strong in Southern and Central Ostrobothnia. The number of village bonfire events has increased and families still light family bonfires. Large regional bonfire events have not been arranged much during the 2000s. The tradition will remain a strong form of custom and festive culture, as it has been able to adapt to the needs of modern-day people. As long as the rural areas remain alive, the tradition will live on through new variations. The belief and touring from house to house traditions related to the tradition will continue to promote the vitality and continuance of this tradition in the future. The tradition is not intended and conserved just for people of certain ages, but it is intended for all.