Different kinds of hobbies related to forests and nature and moving in nature are an important part of the Finnish way of life. Almost all Finns, or 96%, engage in outdoor activities every year. On average, Finns do outdoor activities 170 times per year, and roughly three out of four visits are to areas with a forest environment.

The most popular outdoor activity is going on a walk; 70% of Finns go on walks every year. The next most popular activities are spending time in nature (68%), swimming in natural bodies of water (68%), cycling (55%), picking berries (58%), picking mushrooms (40%), fishing (44%), boating (49%) and cross-country skiing (41%). Many also do sports that require specialised skills, such as hiking (27%) and Nordic skating (5%). On average, Finns have 13 different outdoor activities as hobbies. Two out of three Finns spend leisure time at a cottage in the countryside, and outdoor activities in its surroundings are commonly based on everyman’s rights. Many also have opportunities for outdoor activities close to home, because one-half of Finns live at a maximum distance of 200 metres from a forest. 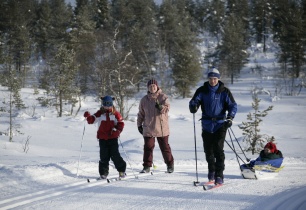 Everyman’s rights enable access to nature – on waterways and into forests and disused land. They refer to the right to move, spend time, stay and camp temporarily and take advantage of certain natural products on other people’s land. Everyone who spends time in or moves outside public areas or their own land needs everyman’s rights.

Everyman’s rights give people the opportunity to move and hike on foot, ski or bicycle in places such as forests and disused land, go camping or climbing on boulders and cliffs, or go swimming, ice fishing or mushrooming. You can get materials for decorations and arts and crafts from the forest, because gathering things such as unprotected plants and dry branches, cones and acorns that have fallen to the ground is allowed. Yards, cultivated areas and other areas designated for special use, such as strict nature reserves, other nature reserves and certain areas managed by the authorities, are not accessible within the scope of everyman’s rights. 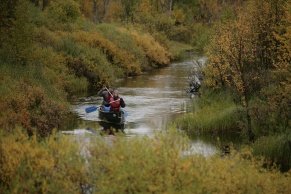 Everyman’s rights in a nutshell Based on everyman’s rights, everyone can, without a special permit, move on foot or ski and bicycle in nature, such as in forests, natural meadows and bodies of water, ride a horse, spend time in and stay overnight temporarily in areas where moving about is also permitted, gather wild berries, mushrooms and unprotected plants, go angling and ice fishing, and go boating and swimming and wash themselves in bodies of water, and move on ice.

However, the use of everyman’s rights must not disturb the use of land by the landowner, and everyman’s rights do not permit moving in yards, cultivated areas or cultivated fields, felling or harming growing trees, taking dry or fallen wood trunks, taking moss or lichen, lighting an open fire on another person’s land, disturbing domestic peace by e.g. camping too close to habitation or making noise, littering the environment, driving a motorised vehicle off road, disturbing or damaging birds’ nests or chicks, disturbing animals, fishing with nets, for example, or hunting without the necessary permits.

The legislation sets the boundary conditions for everyman’s rights, but often the borders of permitted, unacceptable and prohibited activities are ambiguous, and local conditions have a significant effect on assessing them.

Many factors can be found in the background of Finnish everyman’s rights. The sparse population and the fact that areas have not been designated for special use form a basis for everyman’s rights. The lack of major landowners, hunting as a livelihood, and slash-and-burn cultivation as well as the small amount of arable land and large bodies of water have provided the foundations for the tradition of public access to land.

Forests were divided between the farms in the Great Land Reform (storskifte reform) that started in the 1700s. The Great Land Reform did not affect the right of public access to nature, because it continued to allow moving in the forest and gathering the products of nature. In Finland, the cultivated areas and forests have always been mainly the property of small farmers. The right to move on another’s land was self-evident. For example, moving temporarily on another’s land was only mentioned in the Criminal Code of 1889. According to the law, a person could be fined for passing over another person’s yard or field, meadow or cultivated area, causing damage thereby. Among other things, the Forest Act of 1886 included a prohibition against taking tree branches, gravel or moss from another person’s land or making a fire without the landowner’s permission. These regulations were transferred over into the Criminal Code in the late 1800s.

Finland does not have any single law on everyman’s rights. Instead, there are approximately 30 different pieces of legislation that in various ways either grant rights to act in nature, restrict people’s rights, or prohibit certain actions completely.

The most important regulations with regard to everyman’s rights can be found in the Criminal Code, which grants permission to gather berries, mushrooms and other natural products as well as to move on another party’s land under one’s own power (without any motorised means of transportation). At the same time, the Criminal Code prohibits people from causing any more than a minor inconvenience to the landowner. Angling is allowed by the Fishing Act, boating and swimming by the Water Act and the Water Traffic Act, and the movement of groups in nature by the Assembly Act. 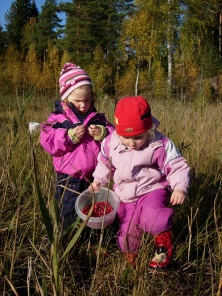 Everyman’s rights are passed on from one generation to another through their use and spending time together in nature. The tradition is also passed on through legislation, curricula and the work done by organisations.

Information and ways of using everyman’s rights are passed on to children by grandparents, parents, professional educators, environmental educators and organisations, among others. Grandparents and parents want to give children shared experiences by taking them into nature. They want to teach children the skills and experiences of moving in nature and share their knowledge of things such as fishing or picking berries and mushrooms. Spending time in nature is refreshing and relaxing, and these are experiences people want to offer their children, too.

Knowledge of everyman’s rights is passed on from one generation to another through personal example, experiences and doing certain things. In addition to the legislation, the undisputed use of everyman’s rights also requires an understanding of a certain cultural propriety. For example, in Finland yards are rarely fenced in. Nonetheless, most of the users of everyman’s rights know how to respect the invisible borders of the yard and stay a suitable distance away from habitation during their travels. Moving in nature can be independent or guided, such as when people participate in the nature activities offered by different organisations. Everyman’s rights and providing instructions on how to use them are a part of the normal work of all non-governmental organisations that organise activities in nature.

Everyman’s rights are included in the primary school curriculum. The curriculum also includes content that requires classes to visit and study in nature.

In Finland, legislation provides a basis for everyman’s rights. The laws both grant rights and restrict them. The liability of actions to punishment is also provided for by law. The right to pick berries and mushrooms, general fishing rights, and the right of public access to water are examples of rights granted by law. Lighting an open fire being subject to a permit, unauthorised hunting, and the protection of property are examples of legislation that restricts everyman’s rights. In addition to these, legislation also includes general rules on behaviour, such as the prohibition against disturbing domestic and public peace. The Nature Conservation Act prohibits setting up signs that would restrict everyman’s rights in a way that is not based on law.

The future of everyman’s rights seems secure. Outdoor and nature activities are important to Finns, and they have plenty of enthusiasts. Outdoor activities in a natural environment create numerous positive effects on well-being and health, both psychological and physical, and their importance to individuals is great. The economic and social significance of everyman’s rights also grows as leisure time and nature tourism increases.

According to a follow-up study, participation in outdoor hobbies has increased. Out of the types of activities carried out under everyman’s rights, camping, visiting natural attractions and bird-watching have grown in particular. Proportionately, the types of activities that have increased in popularity the most include running, Nordic skating, snowshoeing and out of sports that require skill, rock climbing. There is an increasing amount of knowledge of nature’s effects on health and well-being, and the use of nature as a part of preventative health care, the treatment of diseases and as a therapy treatment is growing.