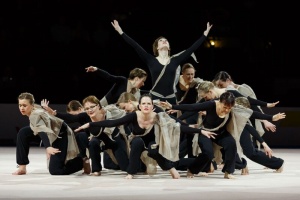 Flow Gymnastics is about storytelling, expressiveness and the joy of performing. Team Hengettäret from Mäntsälän Voimistelijat gymnastics club during the gymnastics gala held at the Rhythmic Gymnastics World Cup in February 2016. Photo: The Finnish Gymnastics Federation/Sami Iivonen. 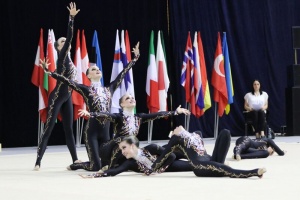 In aesthetic group gymnastics, the programme is a balanced combination of movement, music, costumes, expressions, athleticism, atmosphere and a theme. The content and progress of the programme are strictly defined by both national and international rules. From the athletes, this discipline requires balance, mobility, strength and coordination. A sense of rhythm and expressiveness are also important, because the competition programmes build a story around the music.

Flow gymnastics is based on traditional Finnish gymnastics, similarly to aesthetic group gymnastics. It is a full-body sport, in which the movements originate from the core, flow seamlessly and are rhythmically, aesthetically, creatively and expressively reflected by the entire body. In addition to possessing the sport-specific technique, the athlete must be physically fit and have strength, mobility, a good sense of balance and coordination.

Flow gymnastics programmes also require expressiveness and the ability to convey emotion from the competitors/performers, so it is important to do exercises that develop these skills in addition to the actual technique. Flow gymnastics offers athletes opportunities and challenges to create a variety of programme styles – the free flow of creativity and the possibilities provided by different types of music and themes are almost endless! 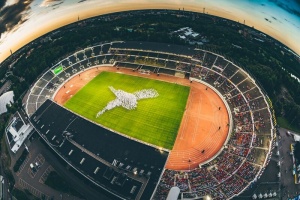 Valkea lintu (‘The Swan”) large group performance with over 800 gymnasts charmed the audience at the international Gymnaestrada gymnastics event organised in Helsinki. Photo taken from the evening performance Midnight Sun at the Olympic Stadium. Photo: Gymnaestrada2015/Akifoto.

Nowadays, the choreographies of large group performances range from basic to more advanced. A single programme may also contain simple and more challenging roles, allowing people of varying skill levels to participate. In addition to movement variations, the programmes can be made more difficult by adding changing geometric patterns and fast-paced transitions. The main focus in large group performances is always on the large number of gymnasts. A simple movement combined with changing patterns looks impressive when performed by 600 people simultaneously to music.

The Gymnaestrada gymnastics festival held in Helsinki in summer 2015 was the largest sports event ever organised in Finland in terms of the number of international participants. At Helsinki’s Gymnaestrada, the audience was delighted by performances such as the Swan, performed by 800 Finnish gymnasts. This choreography was designed by Riikka Virkajärvi-Johnson.

Helsinki also wrote a new chapter in the large group gymnastics history: for the first time ever, the event included an international routine called From Near or Far – Come as You Are! This routine was performed by over 2,000 gymnasts from 33 countries from every continent. The choreography of this international large group performance was created by Finnish Marja Kallioniemi and Hannele Ahlqvist.

After Helsinki’s Gymnaestrada, the Swan performance was also booked to be performed at the gymnastics mass event in Germany, Turnfest. More than 500 women from Finland travelled to Germany to perform the Swan routine at Turnfest’s Stadion Gala in June 2017.

Traditional Finnish gymnastics has a long history. The first women’s gymnastics club, Gymnastikföreningen för Fruntimmer i Helsingfors, was founded in 1876, only a year after the foundation of the first men’s gymnastics club. The founders of the women’s club included Elin Waenerberg (later Kallio) and Betty Sahlsten. Elin Kallio (1859–1927) is considered the mother of traditional Finnish gymnastics, and she had a significant role in the development of the sport. Six years after the club was founded, Kallio took part in organising Finland’s first women’s gymnastics show, and she also arranged the first female gymnasts’ trip abroad to Stockholm in 1891.

The turn of the century was a time of launching and practising the running of gymnastics clubs and federations. In accordance with the zeitgeist of the period, sports was a means to promote public health and educate the people, as well as to promote women’s emancipation and national independence. Finland’s first federation for sports, the Women's Gymnastics Federation of Finland (Suomen Naisvoimisteluliitto, Finska Kvinnors Gymnastikförbund) was founded in 1896, with Elin Kallio leading the project, and for the following years, the federation was in charge of several large sports festivals.

The skills of Finnish gymnasts have also been exhibited at three Olympic Games. The first one of these was in Stockholm in 1912, where Finland had a women’s gymnastics team consisting of 25 athletes. In Berlin in 1936, the stage was simultaneously occupied by 206 female gymnasts, and at Helsinki’s Games in 1952, the Finnish team consisted of 675 gymnasts from four clubs.

Since 1953, Finnish girls and women have performed many traditional Finnish gymnastics routines at the international Gymnaestrada events, and through the performances, the joy of doing sports and the community spirit have been communicated to the audiences. Finns have participated in all of the Gymnaestradas, performing large group performances on fields, group routines in halls, at evening shows and on urban stages. 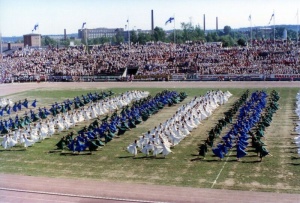 Raija Riikkala’s famous Finnish Summer large group programme was performed at the Finnish Festival Games of 1980. The programme used music by Jean Sibelius, and the athletes wore long, wide and wavy skirts as their ‘apparatus’. At the end of the programme, the gymnasts formed a fluttering Finnish flag. This field programme was performed as a hall version in 1982 at the Gymnaestrada in Zürich, and again as a large-scale field performance at the first World Championships in Athletics in 1983 in Helsinki.

Aesthetic group gymnastics is a well-established sport in Finland and a popular hobby. In addition to the professional training with long-term goals provided by gymnastics clubs, the sport is being further developed in Finland by an expert group on the sport. The task of this expert group is to develop the sport and promote, guide, monitor and assess the development process, based on the vision and strategy of the Finnish Gymnastics Federation.

Before these large-scale events, the Finnish Gymnastics Federation organises shared rehearsals for all participants, and at these rehearsals, the hundreds of athletes and amateur gymnasts meet for the first time, gathering at the same field to perform the programme as one big group. Gymnastics clubs and instructors have an important role in preserving the Finnish large group gymnastics tradition and passing it on to younger generations. 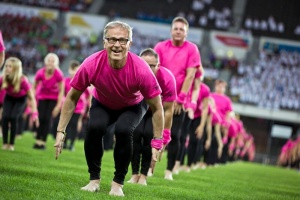 The future looks bright for gymnastics. Thanks to the strong training tradition in aesthetic group gymnastics, Finnish teams will continue to achieve international success generation after generation. The World Championships in Aesthetic Group Gymnastics at Helsinki Ice Hall on 26–28 May 2017 provided thousands of spectators and friends of the sport with excitement and entertainment.

The sport of flow gymnastics is also being developed further. Athletes around Finland feel passionate about the discipline, and the renewed competition system will facilitate growth and development of the sport. Flow gymnastics is a hobby that offers performance opportunities at various shows and attracts people of all ages and skill levels.