Horsemanship of the Roma 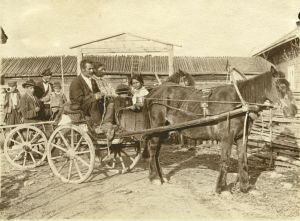 Horsemanship is part of the living cultural heritage of the Roma in Finland. It unites the Roma population, which totals roughly 10,000 in Finland. Horse ownership has often been the livelihood of the whole family, and everyone has participated in horse care in their own way. Good horse care has been a matter of honour for the Roma: ‘Everybody has fish and bread, but few have a good horse.’ It is also said that horses are like family members – so important that blessing one’s horses every morning is a common custom.

The Finnish Roma people have also often been called a horse racing people in Finland. Many Roma have found their place in horse racing as horse caretakers, breeders, farriers and previously as saddlers as well as in the roles of castraters, trainers and jockeys. Today, several dozen Roma work as professional trainers in horse racing, and several hundred Roma possess an amateur licence, i.e. a C licence. There have been estimates that hundreds, or even thousands, of the ten thousand Roma in Finland are active horse enthusiasts or professionals. 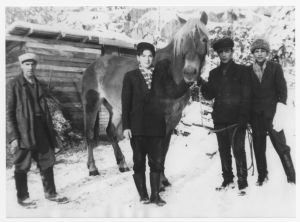 Today, the horsemanship of the Roma lives on in many ways, as a recreational interest in horses and through equestrian sports. Horses are raised for recreational and competition purposes, and the number of ponies has also increased today. The proportion of girls and women who have a recreational interest in horses has particularly increased in recent years. Seeing their own people succeed in the horse industry raises the Roma people’s self-esteem, and the success achieved in horse racing and breeding is respected throughout the Roma community.

The horsemanship tradition involves a great deal of knowhow related to horse care, feeding and equipment. Good horse care includes hay, oats, carrots and vitamins, among other things. The stall must be kept clean, and the floor must be covered with soft and clean wood shavings. Horse care is a matter of honour, and the well-being of a horse can be seen from its shiny coat, among other things. The tack, reins, shafts, cart, sleigh and other equipment are serviced and kept in good condition. Reins are often hung from hooks on the stable wall to keep them tidy and make sure that they are not left lying around on the stable floor. Reins have also been kept indoors as decorations, and horse collars have been used to make mirrors, for example. Reins have been repaired with black waxed thread and oiled to keep them supple.

The horse keeping and breeding skills of the Roma are particularly visible in race horses. Roma stables have produced both race horses and whole families of horses. There are Roma families who possess strong expertise in equine husbandry across several generations and who are appreciated among both the Roma and the majority population. Horse keepers receive grants when their horses perform well in races. Suomen Hippos (the Finnish Trotting and Breeding Association) has given recognition to private horse keepers.

Races are also highly significant to Roma families. Both Roma men and women watch races and may even bet on them – if not on location, then remotely. If their own horse is racing, they go watch the race in person. They particularly watch and participate in Kuninkuusravit and other larger events, especially in the summer, when travelling is easier and many people are on summer holiday. In horse racing, the participants travel across borders, particularly from Northern Finland to Sweden, and races and horse care set the pace for these families’ entire lives. This is particularly visible as through traffic at the Tornio-Haparanda border. 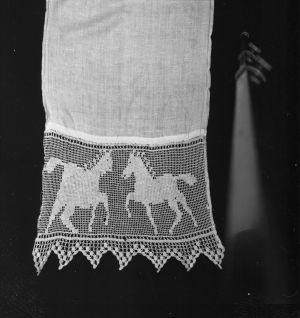 Lace with horse motifs from the 1970s. Photo: Erkki Ala-Könni.

Horses have held a special position in Roma culture as a medium of exchange, status symbol and means of transport. Until the 20th century, Finnish agriculture and most transport relied on horses. Horses required continuous maintenance, i.e. shoeing, care, breeding and raising of foals. Horse tack, such as saddles, collars, halters and harness saddles, were consumer goods. All of this provided the Roma with a great many opportunities for work and trade. Trading in horse tack and horses was the main source of income for Roma men until the 20th century. Horses also held symbolic value in the social interactions among the Roma population as well as with the majority population. The measure of a Roma man was his horse and his horsemanship. The traditional professions of the Roma, such as odd jobs at farms and the sale of handicrafts, also required them to go from door to door. According to a well-known set phrase, a horse was a gypsy’s field.

The industrialisation, motorisation and urbanisation of Finnish society changed this setting decisively after the Second World War. The significance of craftsmanship decreased with the introduction of mass production, cars replaced horses as modes of transport, tractors replaced them as farm machines, and it proved to be more difficult to make a living with the Roma population’s traditional sources of livelihood. The shifting of the Roma population’s own lifestyles towards permanent residences in cities also contributed to the decline of the significance of horse husbandry as the population’s source of livelihood.

Horse culture went though a dramatic change in Finland after the Second World War. The number of horses kept in Finland was at its highest in 1950, when it totalled almost 410,000. This number began to decrease strongly over the course of the 1950s, when agriculture and forestry became mechanised. The number of horses was at its lowest at the turn of the 1980s, when they only numbered 31,500. However, horses gradually began to have a financial significance again when horse racing evolved into one of the most popular sports in Finland. 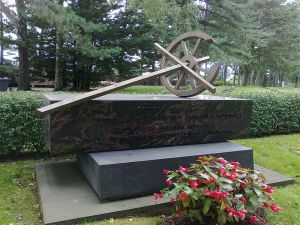 In addition to their symbolic and financial value, horses have had an enormous spiritual significance for Roma men in particular, for whom the stable and the people there have also been a source of mental and spiritual strength. In an unsettled lifestyle, the good care and condition of horses decisively affected a family’s ability to travel from market to market and door to door, looking for work and a living. As horses are very perceptive animals, the best older horsemen have also often been balanced leaders of their own Roma family and trusted members of the whole community.

The Roma horse culture has also left its mark on the Finnish map. The place names in Finland include a total of a couple of hundred place names of gypsy origin, the origin of which is still largely shrouded in mystery, even to the majority population. Roads may have been built on top of some former horse-friendly ‘gypsy trails’, and many a field still carries the name of gypsy field or meadow. Closer examination of these place names in cooperation with the local Roma communities would be of the utmost importance, as their background details can easily be lost over the generations.

One special characteristic of Roma horsemanship has been good equine medicine, in which horses have been treated holistically, both by preventive means and by medicating various ailments with the means primarily provided by nature, knowledge of animal psychology and behaviour and muscle manipulation, among other things. Many problems have been successfully prevented with horseshoes suitable for their purpose of use and with timely and appropriate treatment of injuries, among other things. For example, moss and clay were used on horses’ feet, and this treatment is still in use today. 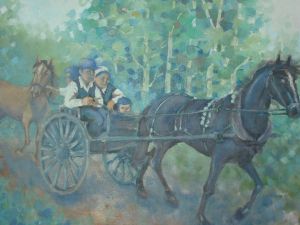 A painting by painter Ritva Lohiluoto from Aura from 1987.

The horsemanship of the Roma has traditionally been passed on from generation to generation within the family and community. Horsemanship is often passed on from father to son, but girls and women have always played an important role in feeding and taking care of the horses. Some families are known to remember the names of their horseman ancestors from as far back as five generations ago.

Equestrian knowledge is passed on both as tangible and intangible heritage. Sheets and facial towels are often decorated with lace with horse motifs, and horse rings and other horse-themed jewellery are still common. Horses also appear in traditional Roma songs (‘When my old father gave me a chestnut horse...’ and ‘Son, go and shoe that troublesome foal...’), quips (‘A good horse can be seen even under a sorry blanket’), similes (‘A horse like a butterfly though it doesn’t fly’) and fairy tales (‘How a gypsy got a horse’), for example. The broadness of the Roma-language vocabulary related to horses also tells us about the age and cultural status of horsemanship.

Today, it is common to seek knowledge on how to care for a horse from courses and community colleges. The first race jockey courses intended for the Roma in particular were held in Kiuruvesi in 1980. Educational institutions favoured by the Roma include Ylä-Savo Vocational College in Kiuruvesi and Ypäjä Equine College, for example. The connection between the Roma and horsemanship is also supported by the fact that it is possible to incorporate studies in Roma language and culture into the Vocational Upper Secondary Qualification in Horse Care and Management that is completed at upper secondary vocational institutions. 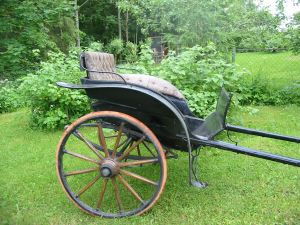 A cart made in Tuulos in Valde Valentin’s yard, Mikkeli 2010. Photo: Helena Valentin.

The vitality of the horsemanship of the Roma is particularly threatened by the urbanisation of their lifestyle, as well as their lack of means and social exclusion, but also by the fact that the majority population has never truly acknowledged the value of the knowhow of Roma families. Many of the best Roma horsemen in Finland obtain their actual living from abroad, as far away as Hungary, which leads to their knowhow flowing abroad and prevents the profile of the Roma community as experts in horses from becoming common knowledge. One of the reasons for this is the fact that the discrimination against the Roma also has its own manifestations in the horse industry.

With a recreational interest in horses requiring increasingly large financial resources, the children of poorer Roma and the Roma living in cities have limited opportunities to form a close and living relationship with a horse. Because of this, the sense of belonging to the horse culture is left without the foundation that previous generations had back when a horse was simply one of the family members. In this type of situation, participation in the horse culture may easily and gradually start to become more superficial, and characteristics outside equestrian sports will start to become clearly pronounced.

This could be influenced by investing some of the financial resources allocated to supporting the recreational activities of Roma children and young Roma specifically into supporting recreational equestrianism under the leadership of masters of the horse culture tradition. This should specifically be implemented in the form of practical courses and camps in which the knowhow of the top experts in the Finnish horse industry and Roma horse industry experts are combined and passed on to Roma children and young Roma. The stories of horse-keeping Roma families must be collected, the treasures in home archives must be documented, and these materials must be edited into literature on horses in cooperation with parties that record the history of horse culture. The horse culture of the Finnish Roma deserves its own day of celebration, similarly to the International Roma Day, or the role of the Roma should be brought up in conjunction with other relevant days of celebration. One such celebration is the national Finnhorse Day, which is celebrated on 6 September.

National Advisory Board on Romani Affairs