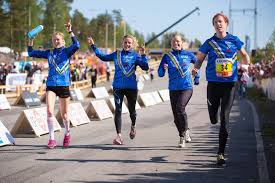 The Jukola Relay is the world’s largest annual orienteering event. It has long traditions, as the first relay was organised in 1949. Over the decades, hundreds of thousands of Finns and international orienteering enthusiasts have taken part in the event.

The participants include teams consisting of top professionals, active competitors, hobbyists, fitness enthusiasts and, more and more often, some with no orienteering background at all. These days, the event attracts around 18,000 participants (1,400 women’s Venla teams and 1,800 Jukola teams). In August, a separate Nuorten Jukola orienteering event for young people is held. It has seven legs and there are about 200 teams participating.

The competition location changes every year and, over the decades, Jukola Relay has touched many Finns all around the country. The local sports clubs are in charge of organising the relay. Nowadays, the work of around 1,500 to 2,000 volunteers is needed in order to set up the event. Several hundred volunteers from out-of-town also take part in the event. They may not be actively involved in orienteering, but they want to experience the Jukola Relay as volunteers, time after time. Jukola Relay has established its spot as a popular TV and radio broadcast, live broadcasts are transmitted throughout the entire event.

The right to hold the event is granted by Kaukametsäläiset ry, which was established in 1948 with the idea of implementing an orienteering relay for seven men. The model for this was the 10-leg Tiomila relay that had been held in Sweden since 1945. Jukola Relay, Jukolan viesti, was quickly selected as the event’s name, as it was felt that it gave it its own, unique contribution to the growing competition activities.

Jukola is organised by different sports associations every year. The Finnish Orienteering Federation has competition rules and it supervises compliance with them. The federation was established in 1935 as a committee of the Finnish Amateur Athletic Association and became independent in 1945. At first, the federation was called Suomen Suunnistamisliitto in Finnish, and its current name, Suomen Suunnistusliitto, was established in 1959. 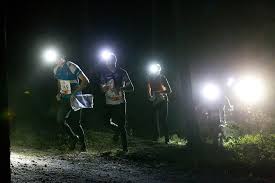 Orienteering is practised and done in many different ways. When moving around in the wild, a map and a compass are needed, for example when picking berries or mushrooms or during hiking trips on the fells in Lapland. As a form of sport, orienteering gets around 50,000–60,000 people up and moving every year in Finland and it is calculated that there are over half a million participants annually in different orienteering events on all levels ranging from professionals to hobbyists.

According to the register of the Finnish Orienteering Federation, just under 12,000 people had claimed a competing licence for orienteering in 2016. The number of people who have claimed a licence has decreased by a few thousand over the last ten years. In addition to the rising average age of the competitors, this decrease can be explained by the fact that many competition actives nowadays mostly take part in hobby orienteering and Jukola Relay, which do not require a licence. In 2016, there were a total of 3,900 hobby orienteering events in Finland, with 413,000 participants.

The four-leg orienteering relay for women, Venla relay, and the seven-leg Jukola Relay for men, are both included in the Jukola Relay event. The established date for the relay is the third weekend of June. The Venla relay takes place on the Saturday afternoon while the Jukola Relay starts late on Saturday evening and continues through the night. The winning team will reach the finish line on Sunday morning about 7 am. The venue of the relay changes annually and the next places (2017-2021) are Joensuu, Lahti-Hollola, Kangasala, Rovaniemi and Lieto-Mynämäki. Today, the relay attracts around 17,000–18,000 participants (1,300–1,400 Venla teams, 1,700–1,800 Jukola teams). In August, a separate Nuorten Jukola orienteering event for young people is organised. It has seven legs and there are about 200 teams participating. 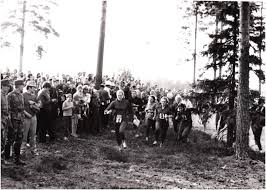 According to different sources the idea of organising the Jukola Relay brewed during and after the latest wars and after them. In 1942, Helsingin IFK sports association held the Finnish orienteering championship in Kiljava close to Aleksis Kivi Day (10 October), in the forests that are the milieu of the author’s famous work Seven Brothers, i.e. the Jukola brothers. During the competition, the participants heard the story of how these seven Jukola brothers ran bare foot from their home in Impivaara to their birth place called Jukola. When the Jukola Relay was then first held in 1949, it had a strong connection to Finnish nature from the very beginning. During the planning stages of the relay, a seven-leg relay was run in connection with the Suomen Suurkisat sport event in 1947. Inspired by this, people wanted to develop a relay ‘in the spirit of the seven brothers’ and an association dedicated to this project was established. This gave birth to Kaukametsäläiset ry, the rules of which state that the association must ensure that the Jukola Relay maintains its high quality and that traditions are upheld in its practical arrangements, honouring the spirit of the work Seven Brothers by Aleksis Kivi. The first Jukola Relay was held in 1949. Women have competed in Jukola Relay since 1951 but at first they competed as individuals in Venla run, which was turned into a relay in 1978.

The Jukola Relay has grown significantly over the years and the record of a thousand teams was reached in 1987 at the Jukola Relay held in Hollola (1,052 teams). In 2015, the Jukola relay held in Paimio had 1,757 teams and it is believed that the record of 2,000 teams will be reached within the next few years. Jukola Relays held near ports (Turku, Helsinki) usually attract the most participants, because the proportion of Swedish teams increases. In recent years, teams of fitness enthusiasts in particular have discovered the Jukola Relay. People come to the Jukola Relay to seek experiences and thrills, as for many people merely finishing the course is a great accomplishment. 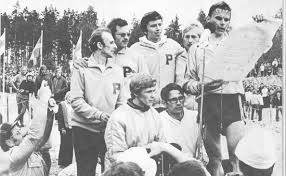 The Liedon Parma team reading the Jukolan sanoma declaration in 1972.

Kaukametsäläiset ry ensures that the event is organised in accordance with the same principles every year. The application process ensures that the arrangements for organising the competition have been made for the next 5 to 8 years, so that the association in charge of the arrangements has enough time to maintain quality. Materials for organising the event are passed on from year to year, such as structures, operational methods, agreements, etc. as well as a significant amount of know-how. The future organisers will closely monitor the arrangements of previous years and there is also a separate joint meeting to transfer information. The tradition is passed on through, for example the Jukolan sanoma declaration, which is written separately for each event and given to a selected party after they cross the finish line of the Jukola Relay. The event has kept its strong connection to its founding principles.

Orienteers have long traditions of good cooperation with land-owners, hunters, nature enthusiasts and environmental authorities. During the early stages, an environmental programme is drawn up for the event and a nature review will be commissioned. These will then guide all operations.

The number of participants in the Jukola Relay has grown steadily. This development in the number of participants differs from that of, for example, the Tiomila relay in Sweden. The event has established its position as the annual top event for orienteering teams and these days participants come from all over the world. The arrangement rights have already been granted until 2021 and the application process for the two following years is now open. The event has a steady foothold among hobbyist teams and ‘Jukola schools’ are organised all around the country during the spring, utilising the local, public orienteering events. Orienteering associations organise these ‘schools’ by request or of their own initiative and the students include people who have not run orienteering much before, but are interested in attending the Jukola Relay. After the theory classes, the students are taken out the classroom and usually sent to attend the local, public orienteering events.

Organising the Jukola Relay is nowadays a challenging effort for the organisers. The location of the competition centre requires excellent traffic arrangements and transport connections, and even though nearly all the work is carried out by volunteers, the organiser also takes on a major financial risk. In addition to the participants, tens of thousands of people attend the event as spectators. A significant proportion of the costs incurred from organising the event is covered through sales profits during the competition, in addition to the participation fees. The entrance to the Jukola relay village is free of charge, but a small parking fee is charged to people arriving by car. 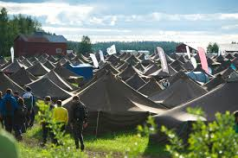 Even though the Jukola Relay has grown and become more like a folk festival, many things have remained the same over the decades. The participants still most often stay in tents and eat in field conditions, people arrive as families, etc. Although the opening ceremony of the event no longer features a religious sermon, the competition centres still have forest churches. The large shops, beer tents and massive screens that show the competition’s progress are a modern addition. With regard to sports, the nature of the event has been maintained; the number of legs has not been changed and the timing of the event has remained mostly the same. In the competition technology, the biggest change has been the electronic control card punching and the related timing, which has been in use since 2000. Electronic punching and GPS monitoring make it easier to monitor the competition and supervise the competitors.

As Finns, we have a special relationship with nature, especially forests. The work ‘Seven Brothers’ by Aleksis Kivi describes this relationship beautifully. Forests give us livelihoods, it is a place of growth and construction, a place to enjoy the pleasures of life and to escape any dangers and it also helps us deal with difficult situations in life. There are very recent research results concerning the calming effect of forests.

A forest is also a place for recreation, providing opportunities for many activities. A forest is also a place where many stories begin. Through Aleksis Kivi’s story, the Jukola Relay draws its strength from the relationship Finns share with nature and aims to maintain its original spirit and its close connection to forest nature despite all the changes brought on by technical development.