Kalakukko is known throughout Finland and is often linked to Kuopio and the eastern parts of the country. In 2002, the European union granted kalakukko the label Traditional Speciality Guaranteed (TSG). This name highlights the traditional composition or production method of a product. It can be produced in any EU country, but the product must adhere to the registered production method. 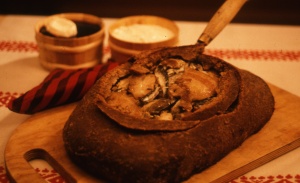 Kalakukko is eaten by cutting away a round disc from the top of the loaf with a knife, after which thin slices are carved from the bread crust. Photo: KUHMU / Bertta Räsänen 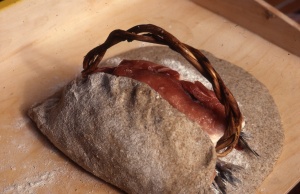 Making ripakukko. Ripakukko is a Rautalampi speciality, a kalakukko with a ‘ripa’, or a handle, made from birch branches baked in it. The kalakukko was carried by this handle when travelling to church. Photo: KUHMU / Bertta Räsänen

Kalakukko is a round or oval baked food that resembles bread. It has a dense and fairly thick rye bread crust, the surface of which has been hardened and made denser by first baking it quickly at a high temperature. The crust acts as a cooking pot during the baking, inside of which the filling, made with fish and pork, is cooked, becoming tender, juicy and soft. The crust and the filling complement each other, making a complete dish.

Made at home, kalakukko is an affordable meal: rye flour and fat are purchased from the shop. In the winter, perch is acquired through ice fishing; in the spring the small spawning perches and in the summer angled perches can be used in the filling. Today, both women and men bake kalakukkos at home.

Kalakukko is an excellent meal, combining bread and fillings. 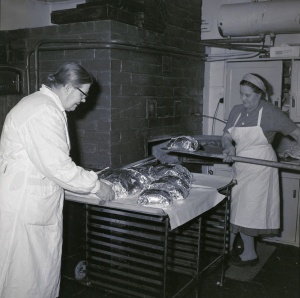 In Savo, larger fish were chopped up, but small fish were used whole in kalakukkos, after gutting. Pork was also used. The bake is a relatively tall, round, elongated and oval bundle, closed at the middle.

Earlier, small fish were used for kalakukkos, such as vendace, European smelts, ruffes or Baltic herring. Nowadays, kalakukko is usually made with perch or vendace. Salmon may also be used in the filling, if it is served at celebrations.

The kalakukko crust is quite sweet and made of rye flours mixed with nothing but water. Sour rye bread dough may have been used to make the crust, if rye bread was baked at the same time.

As a snack on travels, kalakukko has been found to be an excellent dish, as it combines bread and fillings. Kalakukko has a long shelf-life, nearly as long as that of a semi-preserved product. Ice-fished small fish in winter, spawning perches in spring and angled small fish in summer can be used as kalakukko filling. The fish only need to be gutted, as their bones will become softer during the long cooking time.

A simpler form of kalakukko is called a patakas. It is made by putting small fish into a pot with lard, placing the rye flour crust on top and cooking the dish in the oven long enough to soften the fish bones.

It is said that kalakukko sings in the oven, if there is a hole in the crust that lets the liquid from the filling through. The hole must be covered with leftover crust dough.

Kalakukko is eaten by cutting away a round disc from the top of the loaf with a knife, after which thin slices are carved from the bread crust. The filling is spooned out from the hole. Many people believe that the best part of kalakukko is its bottom. The crust slices are covered with a thick layer of butter. There are several sets of instructions for eating kalakukko.

According to folk memory, Kalakukko has been made since the Middle Ages. According to written sources regarding kalakukko, in 1792 district doctor Anders Ståhl told his royal medical colleagues about Savonian kalakukko (Cala Cucu), which was a type of pastry, made of chopped up fat and baked in a dough crust.

During the harvest festival kekri at the turn of October and November, a kalakukko could be given to the servants as a snack during riiviikko, their only annual holiday. During Matti’s Day (24 February), the herald of the spring season, kalakukko was made using tiny burbot fish that were caught during their spawning season. The food traditions in Leppävirta stipulated that a kalakukko had to be made for Jyri’s Day (23 April), the first day the cattle were allowed outside in spring. Some of the crust’s rye flour was replaced with oat flakes, which stopped the crust from leaking as much as when only rye flour was used. Kalakukko was served at nearly all celebrations and festivities.

Ripakukko is another version of kalakukko, made in Rautalampi. A round handle, ‘ripa’, was baked inside the kalakukko, made of supple birch branches, and the food was carried by this handle during a trip to church. During the sermon, the kalakukko was hung from a tree next to the church. Other ingredients were also used for the filling aside from fish. These included beef, mutton, swedes, turnips, potatoes, cabbage, pork, lungs, udders, squirrel, barley and rice dumplings, snow, coarse salt, and heads of Baltic herring and herring.

Kalakukko has traditionally been eaten on Saturday evenings with kokkelipiimä – a traditional dish made of sour milk. According to the Atlas of Finnish folk culture, kalakukko and fish bread belong to the group ‘pastries cooked in a bread crust or prepared from raw fish by stewing’. According to this, the region covered the whole of Finland. In South Karelia and Kymenlaakso, the dish was called kalakukko or fish pie, in the Karelian regions of Lake Ladoga it was known by the name kalakurniekka. In Western Finland, it was called a fish bread, cake, bake or pie, among other names. However, the preparation method was different from the Eastern version. It was an everyday dish that gradually disappeared.

In the regions of Eastern Finland, kalakukko was a very clever dish that was baked in the ovens used for heating buildings, while the bountiful fishing waters of the surrounding lakes guaranteed the fish for the filling. The first recipe for kalakukko was presented in a cookbook by Anni Olson in 1893. The book states that the dish is a common, traditional food in Savonia and Karelia. The price for the kalakukko ingredients listed in Olson’s recipe was 1 Finnish markka. According to the recipe, slices of turnips or swedes, fresh cabbage or sauerkraut with grits, liver with grits and other ingredients could also be used for the filling.

In 2002, the name kalakukko became protected by the European Union. The label Traditional Speciality Guaranteed (TSG) highlights the traditional composition or production method of the product. It can be produced in any EU country, but the product must adhere to the registered production method.

The Finnish championship competition for kalakukko baking is held every year during the market event in Kuopio in January. The competition features three series of kalakukko baking: home bakers, commercial operators and innovations. The competition has attracted a high number of participants. In addition to the traditional vendance and perch fillings, new fish fillings are now in use. The City of Kuopio and the Kuopion kaupunkikeskustan kehittämisyhdistys ry urban development association are in charge of organising the event. The jury includes members of the Martha organisation, among others.

The Marthas have also been a part of the Kalaryssäys fish market event held every autumn at the harbour market square in Kuopio. Kalakukko was the theme of the year in 2014. At the time, a single-vendace kalakukko, among other innovations, was developed in cooperation with the Martha organisation of Savonia.

The classic song Lentävä kalakukko (‘Flying Kalakukko’), sung by Esa Pakarinen, composed by Toivo Kärki, written by Reino Helismaa, and used in a film carrying the same name, made Kuopio famous. Kalakukko was also the nickname for the train travelling between Kuopio and Helsinki. To honour kalakukko, a Kalakukko Cantata was composed by Ahti Sonninen and the lyrics were written by Aapeli, a famous author of many humorous pieces. The cantata was recorded by Vesanto male-voice choir in 2002.

Kalakukko was selected as the traditional dish of Kuopio in 1985. Kalakukko is served in many local restaurants and it is a part of Savonian á la carte cuisine.

Kalakukko has been crafted into an excellent souvenir product. Kalakukko can be bought from Kuopio market place and market hall or ordered from a tunnel-shaped bakery, where they are baked in wood-burning ovens. The kalakukkos baked by the Finnish master kalakukko bakers guarantee the high quality of the product.

By special order, kalakukko is also available as a vegetarian version, meaning that it is a product that adapts to new food trends. Excluding the long baking time, kalakukko is quite easy to make. The affordability of home-made kalakukko compared to purchased products encourages people to prepare it at home, thus passing on the tradition from generation to generation.

Kalakukko recipes are available in many cook books, and an online search for kalakukko results in more than 10,000 links, recipes, tips and blogs that mention kalakukko.