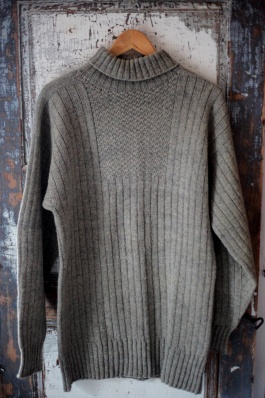 Traditionally, the tikkuröijy sweaters were grey. Today, they are also available in natural white and black. Photo: Liisa Louhela.

The tikkuröijy sweater from Hailuoto is a traditional knitwear made from yarn of unwashed Finnsheep wool, which the women of the island used to knit for the men. During recent decades, some men have also taken up knitting these sweaters. Traditionally, the sweater was a men’s garment, though women have also worn it.

There are roughly a dozen people on Hailuoto island that knit tikkuröijy sweaters for sale. Dozens of people from Hailuoto also knit these sweaters for their own use. People in other parts of Finland also knit similar sweaters, and instructions and patterns for the knits have been published in craft magazines and on blogs.

At the beginning of the 20th century, this traditional knitwear from Hailuoto was still called tikkutröijy, but in more recent texts, the word tikkuröijy is used. Another name for the sweater is tikkuri, where the term ‘tikku’, i.e. ‘stick’, refers to knitting needles. A third common name for the sweater is luotolainen, after the island it comes from – Hailuoto. In the early 20th century, people in the municipalities near Hailuoto on the mainland used the name luotolainen, referring to the fact that the sweater was knitted on an island. The term ‘luotolainen’ is quite common and widely used today. The traditional knitwear from Hailuoto is well-known all around Finland and also abroad. 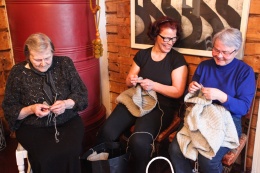 A tikkuröijy knitting club has been in operation since 2014, gathering together dozens of knitters in the old rectory of Hailuoto on a regular basis. Photo: Liisa Louhela.

Tikkuröijy is a monochrome knitted sweater with surface patterns. Both knitting and crocheting techniques are used in making these sweaters. The design of the sweater is simple. It is seamless as it is made using the circular knitting technique. The hem is made of 15 cm of ribbing, created by alternating two knit stitches with two purl stitches. After this, the ribbing is continued but with four knit stitches and one purl stitch. The front of the sweater is decorated with a square-shaped area, which is called kaupunki (city), västäräkki (white wagtail) or rekko (front). The shoulders have a looser fit thanks to a gusset knitted in the middle of the sweater’s back. The stitches for the sleeves are picked up from the armholes. The sleeves are shaped by tapering them from the armhole and elbow. Slip stiches are crocheted at the shoulder seams and the edges of the collar and the sleeves.

The tikkuröijy tradition is alive and strong, and representatives of several generations still knit them. The local heritage society, Hailuoto-seura ry, has held a tikkuröijy club in the old rectory of Hailuoto since 2014. The club has an average of 20 to 30 participants, some beginner tikkuröijy knitters, some experienced makers. The members of the tikkuröijy club exchange knitting tips as well as experiences and stories regarding the sweaters. The information about the history of the tikkuröijy sweater is passed on from generation to generation through the club and in homes as oral history. The club instructors gather and record information related to the sweater tradition.

The tikkuröijy club breathes new life into the old Hailuoto tradition of knitting together. When Hailuoto island was still mostly a grazing ground for sheep, tasks related to their wool brought the women of the island together. The women of the neighbourhood carded wool together during an event called kökkäjäiset: They all came together at someone’s house, carded wool, drank coffee and chatted. The sweaters have also been knitted in private, and still are: women knitting tikkuröijy in their cars are a familiar, typical sight on the Hailuoto ferry.

Hailuoto is an island on the Bothnian Bay, off the coast of Oulu. Sheep herding has been an important part of life on Hailuoto since the late 18th century. Fishing has also been a significant source of livelihood for the islanders. The women of the island have made the fishermen various pieces of clothing, such as warm sweaters, socks and gloves. The traditional sweaters of Hailuoto have been knitted since the beginning of the 19th century. The yarn used was spun by the islanders up to the mid 20th century, when sheep herding came to an end. At the same time, handicrafts became more industrialised and manufactured yarns were introduced to the markets. Hand-knitting on the island became rarer and machine manufacturing of the sweaters began.

The first original tikkuröijy was possibly made by Sofia Björnholm from Hailuoto. This sweater is included in the collections of the National Museum of Finland. It is thought that the name ‘tikkuröijy’ refers to how, in a time before circular knitting needles, the sweaters were knitted using ten knitting needles. These needles were like sticks, in Finnish ‘tikku’. Another theory is that the name could have something to do with hay having gotten stuck in the yarn, making the sweater prickly, as if it had sticks in it.

Knitting these sweaters was an important source of income. The sweaters were sold in Oulu at the autumn and Christmas markets, and they were also sold up north, having been smuggled there during fishing trips. Wool and the sweaters were used to pay taxes and trade with. The sweaters were made without patterns, which was an easy way to identify their owners. If a fisherman drowned, sometimes only the victim’s sweater was sent to the family and the wife would recognise it.

Tikkuröijy was traditionally both the working shirt and a Sunday shirt for the men of the island, which was used in particular by the fishermen during their fishing trips. For the fishermen, the sweater formed a part of their basic gear, especially well-suited to fishing, as it is a practical piece of clothing that keeps its wearer warm even when wet. A better sweater was used during celebrations, and some grooms wore a sweater knitted by their bride at their wedding. At fishermen’s weddings, even the priests occasionally wore tikkuröijy sweaters. The sweaters were knitted in every house by mothers and daughters alike. A few professional knitters also lived on the island, staying at each house for as long as it took to knit a sweater in exchange for food. Old knitted sweaters were used as models. Today, the tikkuröijy sweaters are worn by both men and women. They are also made for children. 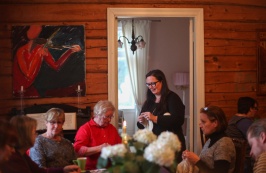 It is typical that parents and grandparents knit a tikkuröijy sweater for the children and teach the interested ones the skill of knitting. Grandparents can also buy tikkuröijys for their children and grandchildren. As the sweaters can be used for decades, the models are passed on from generation to generation.

Today, the tradition is passed on through the tikkuröijy knitting club, where new people of Hailuoto learn the skills of knitting while the experts of this tradition lead them by the hand. Models and tips are shared with the new knitters. The tradition is preserved by keeping the model of the sweater as original as possible. Other products have also been made applying the tikkuröijy model, such as woolly hats, scarves, socks, fingerless gloves, jackets, sweaters for dogs and swaddling clothes for babies. The sweaters as well as the yarns for making them can be ordered through an online shop operating on the island.

As the islanders no longer herd sheep, they order the yarn from elsewhere. However, most often the sweaters are still made of 100% Finnsheep wool. The islanders still often wear the sweaters to celebrations, and sometimes also at funerals. Knitting the sweaters is very popular at the moment and the sweaters are a familiar sight as both celebrational and everyday garments. Preserving the tradition is generally considered important. The future of the tikkuröijy tradition looks bright. The durable and warm knitwear is well-known and the increased respect for traditional handicrafts can also be seen in the sales figures of the sweaters. People come from afar to the island to buy these sweaters, and they are also sold all around the world.