The Finnhorse has played an important role in Finnish society and in securing the Finnish national economy. In addition to the economical values connected to Finnhorses, there are also a number of strong cultural values. Finns have the know-how on how to breed Finnhorses. This know-how has evolved over a long time period through interaction between people and horses.

Currently, there are approximately 1,500 Finnhorse breeders, and they are best aware of the lineages of and recommendation for stallions and broodmares. Most breeders aim to produce horses that will be successful in harness racing, but the number of horses bred for riding purposes has also been on the rise. There are around 15,000 Finnhorse owners. Horse carers, harness racing trainers, riders, social pedagogues and travel companies spend time with Finnhorses every day. Farriers, vets and members of the general public who attend horse-related events are also familiar with this breed. For example, the number of spectators at the largest Finnish harness racing event for Finnhorses, Kuninkuusravit, is typically as high as 50,000.

In order to preserve and improve the breed’s status, four associations have been founded since the early 1970s in this field: Suomenratsut ry, Suomenhevosliitto ry, Suomen Työhevosseura ry and Suomen Pienhevosyhdistys. The aim of these associations is to expand the breed’s forms of usage, increase its appreciation and secure the continuation of the lineages. The breed has also gained more media coverage thanks to social media. Social media is also a good channel through which to distribute valuable scientific information to horse owners about horse care and well-being. In addition, the Finnhorse has significant ties to art, music and literature, all the way to the Finnish national epic, Kalevala. A song written and performed by Suonna Kononen in 2005 and dedicated to the Finnhorse cleverly highlights the close relationship that people and horses share: ‘Where would we be without you – our friend, the Finnhorse?’

Finnhorses are versatile all-round horses, and among the fastest breeds in their harness racing category. The breed is also used for all riding disciplines, such as show jumping, dressage, eventing, trail riding, combined driving and vaulting. The Finnhorse is a popular breed used in riding schools and for carriage rides. People’s mental and physical fitness and well-being resulting from time spent with Finnhorses has become a hot trend. 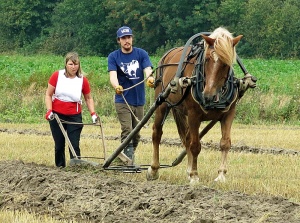 In addition, heritage associations maintain the special skills of this breed as work and military horses, as well as the skills of reinsmen. This small group of experts transport logs after thinnings performed on young forests and from fragile forest parks, because horses can move in the forest without leaving a trace. A vast amount of know-how is involved in all of these, and the information and skills are passed on from generation to generation in various expert and amateur environments. Finnhorse foals are trained to drive when they are only one year old. Riding horses are also first taught to drive, and they will move on to riding as they get older. Many Finnish riders who have done well internationally started their riding careers with Finnhorses.

The Finnhorse is the only original breed of horse developed in Finland. The Finnish word for horse, ‘hevonen’, can be found in all Finnic languages, which, among other things, suggests that Finnic peoples were already familiar with horses during the Bronze Age. The Finnhorse developed into its own breed over the course of a few centuries. The awakening sense of national spirit in the 1890s gave impetus to the desire to breed Finnhorses as the national horse breed. Throughout its known history, the Finnhorse has been genetically adapted and bred to withstand the conditions of our country and suit the needs of its people. The breed has been used as draught horses, military steeds, work horses and harness racing horses. 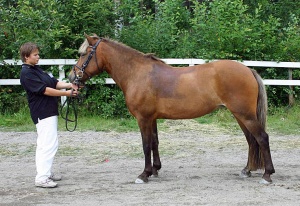 Up until 50 years ago, Finnhorses were needed in every household for food and livelihood production purposes. The agriculture and forestry industries needed a huge amount of horsepower up until the 1950s, and 100,000 horses were used in forestry work alone. In fact, the number of Finnhorses reached its peak during this decade, a total of over 400,000 horses. Over the past century, the Finnhorse has experienced the golden age of workhorses, hardship during the Winter War and the Continuation War, and the rise of equestrian sports.

A great shift took place in the 1960s, as both the army and the agricultural and forestry sectors transitioned from using horses to engines. The gap was filled by harness racing and horse riding, which have become exceedingly popular in Finland. The breed’s studbook was founded in 1907, when its breeding as work and all-round horses began. Initially, registration in the studbook was based on appearance evaluations, but in the 1920s, performance tests were introduced. Many breeders also valued a horse’s speed, endurance and character when selecting broodmares and stallions.

Harness racing results in Finnhorse competitions have been recorded since 1862. The modern records date back to 1971. Finnhorses have four breed sections: trotter type, draught type, riding horse type and small horse type. The current number of Finnhorses is approximately 20,000, and around 1,000 foals are born every year. One quarter of all horses in Finland are Finnhorses.

Since the 1960s, the number of imported horses has continuously risen. Most of these are Standardbreds. Thousands of horses and ponies, as well as some rarer hoofed mammals, representing more than 80 breeds in total, have been imported from European countries. These imported horses have mainly been bred for a single purpose, unlike the Finnhorse, which is a versatile all-round horse that is able to do everything. 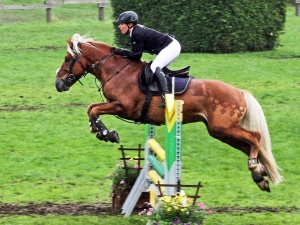 A horse used to be a person’s work partner. This is how the skill of reading horses and their behaviour was developed, allowing the relationship between people and horses to become stronger. Small girls and boys used to be able to enter the world of horses by doing chores in the stables, but nowadays horses are thought of as hobby equipment, waiting for their riders saddled and ready.

Horse handling skills can only be learnt by spending time with horses. The most natural way of doing this is through horse breeding, when the horses’ backgrounds are known and the breeders take part in the new foals’ lives from the very first day. Consistent, daily routines build trust between people and horses. The Finnhorse has been registered in the original breeds’ list of the Food and Agriculture Organization of the United Nations and the European Union. The Finnhorse was dubbed the national horse in 2007 by the Minister of Culture and received its own flag day, which is on 6 September, based on the foundation date of the studbook. It has even been said that the Finnhorse is one of the nation’s key symbols, and its story is nearly identical to the survival story of the entire country.

The Finnhorse register and original studbook are maintained by the Finnish trotting and breeding association Hippos, which is an EU-approved horse breeding organisation and the central association for harness racing sports in Finland. Horse associations, such as the regional horse breeding organisations that have been operating since 1905, support the work done for the benefit of the breed and offer rewards. Breeder, quality and competition prizes are awarded using the accumulated betting funds from the state-run horse race betting service. For example, since 2001 this money has been used to grant training race prizes to improve the overall situation of harness racing. This quadrupled the number of Finnhorses running in these training races, compared to the previous year. In fact, the increase in harness racing prizes and original breed support have proven to be the quickest ways of making the breed’s development turn in a positive direction. 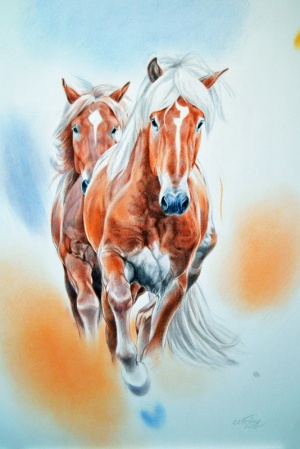 The future of the Finnhorse is full of opportunities. Good horses always attract attention, especially amongst the general public. The Finnhorse has always managed to adjust to current challenges. However, now in the 2010s, the number of broodmares has dropped below the critical point of 2,000 animals. If this trend continues, the available breeding choices will become limited and the progress of breeding will slow down. During difficult times, breeding efforts have been maintained by amateur breeders whose aim is to mainly breed new foals for their own use in order to renew their breeding stock. Horse breeding creates a positive cycle: it increases horse-related know-how and the amount of valuable horse handling skills, which still help to produce top-level horses, thereby attracting more public attention and ever larger prizes. Supporting the breed’s other uses, such as riding, makes the breed less endangered, especially if the Finnhorse keeps losing its foothold in harness racing. Therefore, all measures to help our national horse are vital to secure the breed’s future. The new brand of the Finnhorse is: ‘Unique, athletic, Finnish – a horse for an entire nation.’