Heinämaan Pitsinkutojat ry lace-making association was established in 1959. The purpose of the association is to act as a channel between the different lace-makers and preserve their members’ traditional lace-making skills. The association organises various events and skill competitions in the field.

Heinämaa bobbin lace is made by the different generations, both women and men, young people and children; active lace-makers, handcrafters and people who value handicrafts; active association members and lace-making teachers and instructors. The local people familiar with the bobbin lace making tradition, the surrounding region, the lace-makers of the entirety of Finland, people interested in culture, conservers of lace-making traditions, teachers and instructors of lace-making as well as other Finnish lace-making associations and their members. Heinämaa bobbin lace is also internationally known (international lace organisation Oidfa).

Lace is made everywhere in Finland. Heinämaa village in the municipality of Orimattila has long and unique traditions in making lace. It is a handicraft method in which threads on wooden bobbins (‘nappula’) are weaved together by pinning them to a pillow using different kinds of stitches (‘lyönnit’). In Heinämaa, lace is weaved (‘pitsinkudonta’) while elsewhere in Finland term ‘nypläys’ is used.

Heinämaa bobbin lace is unique due to the thread used and the weaving method. The thread they use is usually quite thick, linen-coloured yarn. The lace is made by throwing the bobbins at a fast pace. The cloths are made completely of lace, and are only sometimes fabric with attached lace borders. Heinämaa bobbin lace often features half stitches, and the whole stitch is not used for the twist edges of the half stitch pattern, unlike in lace from Rauma, for example. The stitches include a half stitch (‘verkkolyönti’), cloth stitch (‘lapastiuha’ in Heinämaa), whole stitch and twists. Various patterns are also weaved, including Hämähäkki (spider) and manteli (almond), which are called Peroi and Pamppala in Heinämaa. Virgin ground stitch is also used and it is known as Mankeli and ump´mankeli in Heinämaa. They also make plaits (‘palmikko’) and tallies (‘ripsu’).

Bobbin lace is made with bobbin pairs, which means that the lace-maker always uses four bobbins at a time. In Heinämaa, the bobbin pillows have a western style; it has a wooden frame and it is semi-circular and convex in shape. Its surface is made of sheepskin and has been varnished until firm. At first, the pillows were stuffed with moss and later wood shavings. Today, they are made with faux leather. There is a square impression in the middle of the back part of the pillow with an attached wooden cylinder, the roll. A motif is attached to the roll, ‘myysteri’ in Heinämaa. It is a drawn and pricked model. Before, this motif was on a piece of birch bark, on which a grid was drawn with a special stick called ‘myysteritikku’. Today, thick cardboard is used instead. 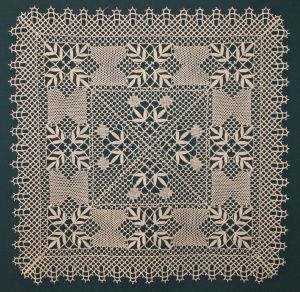 Bobbin lace has a nearly 250-year history in Heinämaa, where the people refer to the process as ‘lace weaving’. Presumably, bobbin lace making started in late 18th century. However, the earliest written records of it date back to 1857. One reason for how well the lace making tradition in Heinämäki has been preserved could be that the village was not easily accessible. Only some of the villagers were able to support themselves with farming. Thus a large proportion of the women of the village – and some of the men – sought to make money by selling bobbin lace. They travelled around, selling their lace. During these travels, the lace makers were inspired by other works, bringing a unique style to the lace made in the village.

It is not certain from where or whom the villagers learned their lace-making skills. According to lore, this happened between the 1760s and 1780s. At first, until the early 20th century, the pieces of lace were narrow, straight strips used between or on the edges of pieces of fabric. Such lace works have also ended up in the collections of the National Museum of Finland, for example through Henrika Kivistö’s lace collection. In the early 1940s, there was a shortage of thread, which changed the lace-making in Heinämaa. Although bleached and thin thread was already available in the late 1940s, people still bought the unbleached thread because they had become used to using it. Therefore, the linen-coloured, thicker (class 16 and 30) thread was usually used, and the people continued to make lace cloths without using any fabric in them. People also continued to develop their skills; new models and items were designed, such as collars, candle-rings, bookmarks, jewellery and even a bridal crown and veil. 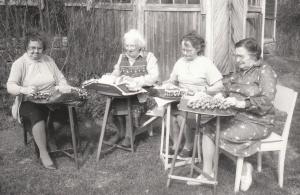 The tradition is being continued by holding lace-making courses for both children and adults. The tradition is also passed on from mothers to daughters, among relatives, by teaching and guiding others. Furthermore, people attend various events with lace making demonstrations and hear about making of bobbin lace and its history. The association also takes part in fairs and exhibitions in Finland and abroad. The Heinämaan pitsinkutojat association operates Pitsitupa, a lace boutique that also holds exhibitions, and organises the Pitsipäivät event dedicated to bobbin lace and the lace-making tradition ever summer. Visiting tourists and customers of Pitsitupa hear about the history and can watch lace-making demonstrations while learning more about making bobbin lace.

Some projects related to preserving this tradition have included recording of the history and preserving the models, which resulted in the Heinämaan pitsiprinsessat (‘Lace princesses of Heinämaa’) book and model folders. These showcase the lace works, their makers and the bobbing lace tradition of Heinämaa. The model folder collection features 100 bobbin lace cloths and their drawn models, also providing the name of the designer, if known, and a photo of the maker.

Pitsitupa welcomes groups of visitors, who are told about the history and shown the lace pieces. Additionally, the two-day Pitsipäivät bobbin lace event is held every summer one week before Midsummer’s Eve. So-called Tyynykylä, ‘pillow visits’ events are also organised. Up to the 1970s and 1980s, this meant that people took their bobbin pillow and visited their neighbour or a member of the association. Then they chatted and made lace, helping each other with any problems. Today, this event is held at Pitsitupa and it is open to all. During both the autumn and spring season, the event is held 4 or 5 times. At Tyynykylä events, the lace makers receive help with problematic bits and with starting and finishing their lace cloth. They also design new products and models. When necessary, the association provides assistance to teachers of local schools during handicraft classes on lace-making. The association has a website which is an important communication channel, and is actively kept up to date.

Before, the schools in Orimattila taught bobbin lace making, but today it is taught only occasionally, if at all, which is why it is not as familiar a skill as before. In the Heinämaa village school, traditional handicrafts were part of the curriculum up to 2009. The school was shut down in 2013, and this tradition was not continued in the new Virenoja village school. As the Heinämaa school building is no longer in use as a meeting place for clubs and such, as it was before, the lace-making club for adults is now held in the centre of Orimattila, about 9 kilometres from the school in Pitsitupa at Kehräämö (the spinning mill) and the lace-making club for children is held in the small oratory owned by the Orimattila congregation.

At the moment, the continuance of this local tradition is in the hands of a few. The most challenging aspect is gaining the interest of children as well as young and middle-aged people and encouraging them to start the hobby. Still, bobbin lace making draw new hobbyists, both children and young people as well as people from the neighbouring municipalities. Before, people sold many of their bobbin lace creations, but today, and in the future, it is mostly done as a hobby, although some people still sell their works. New models, novel ways of using lace and the different new bobbing lace materials garner people’s interest.