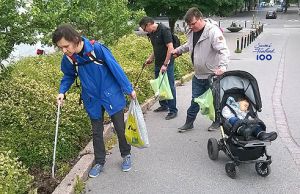 Caring for the environment is living heritage that is passed down from one generation to the next. Today, sustainable development issues are increasingly important. Litter Movement is an example of an initiative that takes care of the common environment. It is based on the idea of picking up and preventing litter in creative ways in a spirit of beauty, sustainability and functionality. Litter Movement was started by one woman and is now internationally spread.

The Litter Movement also works in cooperation with immigrants and asylum seekers. On the right is the founder of the movement, Tuula-Maria Ahonen.

The idea is simple: members pick up at least one piece of litter every day and try to challenge at least one new supporter. From the beginning, participation in the activity has been free of charge and anyone motivated on the topic can participate in it, both in Finland and abroad. There are participants of all ages, from grandparents to the youngest in the family. With this method, ways of caring for the environment and promoting sustainable development are being passed down from one generation to the next.

The Litter Movement website is currently available in 23 languages, and the Facebook page has more than seven thousand members. To support the activities, an NGO, the Friends of the Litter Movement (Roska päivässä -liikkeen ystävät ry), has been established, which provides the movement with resources for the implementation of various visits, the organization of activities, information activities and promotion campaigning.

The Litter Movement is developing new innovations to prevent and reduce littering. Ideas are created in in various practical situations. Over the years, the movement has organized litter walks, where people are invited to a joint social walk and garbage is picked up along the way. The most recent innovation is an airtight “mini trash can” that can be pimped from a recycled jar. For example, you can put your own cigarette butts, cans and candy wrappers in the mini trash can. Due to its small size, the jar fits in a pocket. Mini trash can has been distributed for free to people’s use both personally and by taking it to various and even surprising places such as the library and swimming halls and shoemakers, hairdressers and dentists offices. Hints about these locations are given, for example, on the Litter Movement Facebook pages. President Tarja Halonen has also taken mini trash cans to her own office. The Litter Movement encourages others to engage in similar creative activities.

Another way to encourage litter reduction has been to paint and decorate trash cans. Visual artist Auli Suvanto-Salokannel, for example, has illustrated rubbish bins in Northern Haaga on the initiative of the Litter Movement. Littering was significantly reduced around the beautiful trash cans, which shows that the idea has proven to work.

Journalist and social psychologist Tuula-Maria Ahonen founded the Garbage Day movement together with her daughters in 2000. The movement was preceded by the shock Ahonen experienced four years earlier: at the beach in July, children had to wear shoes because there was a lot of litter on the ground, from toxic cigarette butts to glass shards. This made her wonder what she could do to create a better future. Four years later, while she was picking up litter, she got the idea that if everyone picked up at least one garbage a day, people would live in a much safer environment. Enthusiastic about this, Ahonen started inviting people to join the Litter Movement and managed to get a very good reception. The website was created for the movement with translations to several different languages.

From the very beginning, esteemed public figures have been invited to join the Litter Movement. For example, Presidents Sauli Niinistö and Tarja Halonen and the King of Sweden have received invitations to join the movement. Both Halonen and Niinistö have also invited Ahonen and his husband Jari Peltoranta to Finland’s Independence Day Reception at the Presidential Palace as a sign of appreciation to the Litter Movement.

The mini trash cans are tuned with animal pictures. Pictures work as a reminder of the danger of litter to animals. 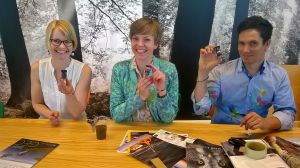 The Litter Movement will continue to operate by inviting influencers. The activity of Facebook pages is also maintained by inviting new members. The activities will continue as before by picking up litter, and the movement wants to develop new innovative inventions in the future as well. Awareness about the Litter Movement is being raised at various events and schools around the country. In addition, Ahonen, the founder of the movement, organizes mini-trash workshops on request.

The ideas of the Litter Movement are free for private people, but appropriate compensation is expected from cities and other major players for implementing the idea.