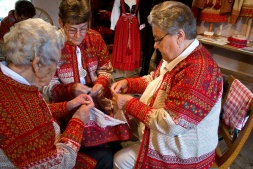 The Korsnäs sweater is relatively well-known amongst people interested in crafts, both in Finland and elsewhere. The Municipality of Korsnäs has adopted the sweater as part of its public image, but the Local Heritage Society of Korsnäs is responsible for preserving the skill and passing it on. A number of masters who can make these sweaters and are teaching the younger generations operate within the local heritage society.

People find the sweater fascinating because of its unique and exquisite pattern. Many want to learn how to make them and join courses or read instructions from books. The society also runs a local heritage museum, which showcases several of these sweaters.

Österbottens hantverk rf, the arts and crafts association of Swedish-speaking Ostrobothnia, as well as the region’s community colleges and centres of adult education, have held courses on how to make a Korsnäs sweater. The association has also held international knitting culture seminars and published books on the Korsnäs sweater. The sweater has been presented at many crafts-related events, and pictures and instructions for it have been published in books and magazines, for example in the USA and Japan.

Individual handicraft enthusiasts make Korsnäs sweaters for themselves, and some also make them to order. Most people learn the skill on a course, but many never make another Korsnäs sweater after the course. The sweaters are made from wool by crocheting and knitting. The combination of crocheting and knitting, intricate patterns and bright colours are typical features of the Korsnäs sweater. The interesting process of making these sweaters is what fascinates the makers, whilst the beautiful patterns and the garment’s history is what attracts the wearers. The makers of these sweaters make highly detailed copies of the museum sweaters using available materials. However, they do make the sweaters more comfortable to wear than their 19th-century counterparts, and the sweaters’ shape also indicates whether body-hugging or loose garments are currently in. The sweaters have also functioned as a source of inspiration. 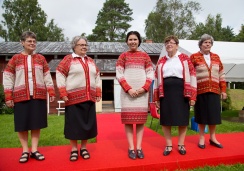 The sweater represents the latest fashion of the latter half of the 19th century in Swedish-speaking Ostrobothnia. When crocheting became popular, someone with a creative streak thought to apply it to sweaters that had previously been made by knitting only. People felt that the result was outstanding and began copying and varying the pattern. The tradition of Korsnäs sweaters has survived uninterrupted for over 150 years. Product development combining an earlier way of making sweaters with a new fashion trend was successful. The crocheted and knitted sweaters are known for their unique, decorative and fun appearance. Their functional qualities receive far less attention, though. The Korsnäs sweater can be called the culmination of folk-style sweaters. They demand skill and patience from their makers.

The sweater has become one of the symbols of Korsnäs, the Swedish-speaking population of Finland, Finnishness and handicraft skills in general, depending on the perspective. The Korsnäs sweater’s status as part of the cultural heritage is also largely due to the fact that it has gained plenty of publicity and several museums have these sweaters in their collections. At least three paintings from the 1880s by Arvid Liljelund feature these sweaters. Liljelund painted the sweaters in such detail that they can be reconstructed based on the images. Two Korsnäs sweaters and one sweater from Vörå were preserved as part of the ethnographic collection work conducted by student nations. In 1885, Theodor Schvindt wrote in his catalogue about men’s handsome formal wear in the Swedish-speaking coastal municipalities stating that ‘The most beautiful and curious among the Ostrobothnian pieces of clothing are the short and thick men’s sweaters, or röijys (stikka-tröj), knitted from wool or cotton yarn.’ Next to another sweater is the text: ‘a sweater (stickatröj), knitted in an extremely beautiful pattern of red, without a fly; the model is still in use. Korsnäs. Note the pictures of women on the waist.’ The Korsnäs sweater was mentioned and emphasized in the publications based on ethnographic expeditions to Korsnäs in the 1920s and 1930s. 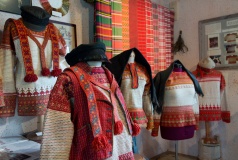 The local heritage society has published a study by Gretel Dahlberg on the makers, masters and models of Korsnäs sweaters, their geographical distribution and the process of making them. A master’s thesis and a doctoral thesis have been written on the sweater, and they have also been featured in several domestic and international publications. The Municipality of Korsnäs has used the Korsnäs sweater’s pattern in its advertising. Korsnäs sweaters have been preserved in collections including those of the National Museum of Finland, the Ostrobothnian Museum, the Korsnäs Museum, the Brage Costume Office, Nordiska Museet (Stockholm) and many private collections. 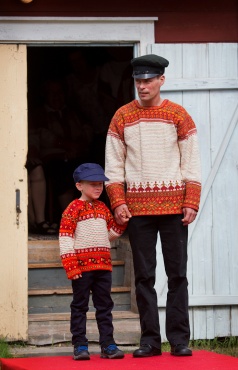 The story of the Korsnäs sweater is passed on via makers, courses, publications and exhibitions. The know-how for making these sweaters is maintained in Korsnäs by holding courses and passing the skill on to younger generations. The majority of these courses are held in the coastal regions of Ostrobothnia, but the skill has also been taught in America, among other places. The Korsnäs sweater has been the theme of many Nordic events revolving around knitting and national costumes. Books have been published by the Local Heritage Society of Korsnäs, Österbottens hantverk and individual researchers. Several museums and private collections contain these sweaters. The sweater is the highlight of the Local Heritage Society of Korsnäs, and it is also a popular theme in the municipality’s communications.

Interest in the Korsnäs sweater and making them is evident among handicraft enthusiasts, and there is also some demand for commission work. The sweaters preserved in museums function as models for relatively detailed copies, but they also form a source of inspiration for completely new products.