National costumes are revised versions of the festive costumes that people wore in the 18th and 19th centuries. The costumes are versions of the festive costumes of the common folk, i.e. the peasants, of the era. The National Costume Center of Finland, located in Jyväskylä, manages matters related to the folk and national costumes of the Finnish speaking areas of Finland. This region also covers the municipalities given over to Russia in the Karelia region. An important part of their duties is to keep the costume traditions alive and share information and the skills of the field. Brage costume office (Brages dräktbyrå) in Helsinki is the body that manages national costume matters of the Swedish-speaking areas of our country. 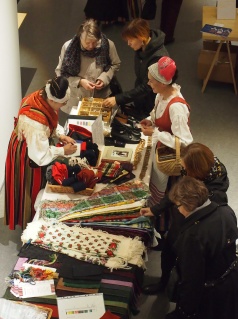 Making the Finnish national costumes gives visibility to the festive costume tradition of the common folk in the 18th and 19th centuries. At the time the folk costumes were used, the costumes were made by hand from natural materials. The new, inspected costume designs approved by a national costume jury, made up of experts of the field, are designed as diligently as possible in accordance with their models, the original costume pieces, with regard to both materials and patterns as well as sewing structures.

Making a costume includes many kinds of working methods, such as weaving the fabrics, making gatherings and lace, and making headpieces. Many of the working methods are no longer in use when making modern clothing, such as gatherings, sewing a thick frieze cloth, sewing chamois and making the paper lining of the traditional bonnet worn by women. These skills would have disappeared without the national costume tradition.

The patterns of the clothes are also significantly different to those of modern clothing. The measurements of the costumes as well as their looseness and fit vary from those of 21st century clothes. The shape of folk clothing is achieved through different cuts, folds and pleats.

In addition to work methods of the national costume tradition, another interesting aspect is what the costume says about its own era, the time of folk costumes. A national costume is not just a costume or a process of making a costume, but the maker will also have to learn how to put the dress on and wear it, which parts must be included in the costume and why are they used. There is a whole glossary of national costume terms. The names of various materials and costume pieces will become familiar during the process, such as parkkumi (special striped fabric), kamlotti (thin wool fabric), sarka and verka (frieze and baize), röijy (jacket), kostuli (a white piece of cloth with an open neckline worn over a shirt), rekkopaita (shirt with plenty of embroidery), hartuushame (a skirt with shoulder straps), tykkimyssy (a women’s bonnet), etc. 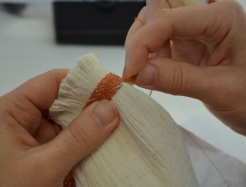 The history of the Finnish national costumes reaches back a little over 130 years. General interest in a traditional way of life and recording it emerged during national romanticism and the attempts to gain autonomy. At this point, wearing clothes that were in fashion had replaced the festive costumes previously worn by the common folk. University students’ clubs organised trips for collecting folklore, the purpose of which was to gather items and textiles of the common people. As a result of these trips, Ylioppilasosakuntien Kansatieteelliset kokoelmat (the Ethnographical Collections of the Student Clubs) were born. Later on, they became a part of the collections of the National Museum of Finland. The interest in folksy handicrafts resulted in making reproductions of folk costumes, i.e. national costumes. In accordance with the European and Nordic example, the wish was to bring national costume models back into public use.

5 August 1885 is considered the day when the national costumes were first publicly displayed. At the time, Alexander III of Russia, the Russian Emperor, was making an official visit to Finland with his spouse. In Lappeenranta, the Empress was gifted a rowing boat, which was rowed by young women in national costumes.

Today, the body that manages the collection of national costume models and the inspections of the existing costume models is the National Costume Center of Finland. Its key assignments are the promotion of national costume traditions as well as the communication, research, preservation, education and advisory work related to the subject. The expert body of the tradition is the national costume jury that features a comprehensive selection different experts in the field. The National Costume Center of Finland is a part of the Craft Museum of Finland. Brage costume office is in charge of the costume traditions of the Swedish-speaking parts of Finland.

Interest in handicrafts is on the rise again. Many who are considering acquiring a national costume wish to make it themselves. It is seen as an interesting challenge and learning new crafting skills brings pleasure in a modern world otherwise filled by digital things. The completed costume is the primary objective, but the making process in itself is significant. During the process, the maker learns about the traditional costume making as well as the lifestyles of the past, self-sufficiency, a way of life in which nearly all necessary things were made at home by hand. Doing handicrafts was self-evident and they were a part of every woman’s basic skill set. Handicraft skills are not often learned at home anymore with the ‘from the mother to the daughter’ principle. The national costume courses play an important role in the making of the national costumes. The course teachers, in particular, have a key position in passing on information about the costumes and the skills required to make them to the costume users. On the courses, participants can learn about the patterns and fittings of the costumes from a dedicated teacher and learn about the techniques of making them. The courses focus on wearing and using the costumes as well as their history and tradition. The National Costume Center of Finland, on the other hand, trains the makers of national costumes and the course teachers. 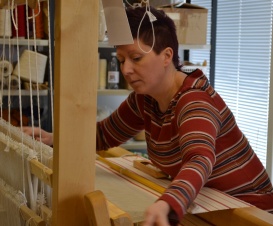 National costumes and making them still interest people today. Basic education for making national costumes provided by the National Costume Center of Finland and Brage for costume makers and course teachers has gathered a group of enthusiastic students eager to complement their existing knowledge and acquire information about national costumes and skills to make them.

Today, young people may receive national costumes from their relatives as an inheritance. At this point, they will usually become interested in the costume and its history. They want to find out more about the national costume and its traditions. Maybe they need to add some missing parts to the costume or adjust its size for a better fit. In these kinds of situations, the national costume courses are a great help. The national costumes are ensembles that include the costume parts determined in its general design. Using individual parts of the costumes and making them a part of modern clothing styles has become quite a phenomenon in its own right. The beautiful patterns and colours of the traditional flammu-skirt, which is made using carefully died yarns that form a pattern, can be seen in a whole new light when paired with a simple shirt. The pendants made of silver plates make any modern dresses and gowns stand out.

Using the patterns of folk and national costumes with clothes made of modern fabrics creates interesting, new kinds of costume culture. Similar to this, using various folksy decoration styles, such as ribbons and braids, and their methods and utilising them as ideas for creating something new offers plenty of opportunities to designers. Young people, in particular, have shown a completely new kind of interest in the costume tradition. Often, this also sparks the desire to learn more about our national costume tradition.

National costumes by provinces and municipalities