National Culture Days of the Deaf 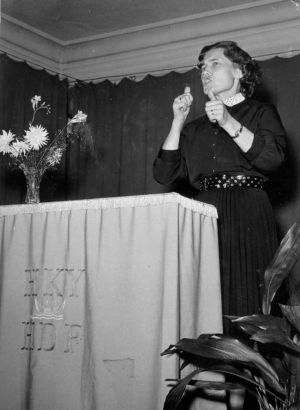 Opening ceremony of the Culture Days in 1956. Photo: Collections of the Finnish Labour Museum Werstas/Finnish Museum of the Deaf.

The deaf community was formed in Finland in the mid-19th century as a result of the launch of teaching for the deaf. The community became organised with the founding of the first associations of the deaf in Finland in the late 19th century and the associations’ umbrella organisation, the Finnish Association of the Deaf, in 1905. At the time, Sign Language was going strong, as was deaf people’s own visual culture. Today, deaf people define themselves as a linguistic and cultural minority, and two national Sign Languages are used in Finland: the Finnish and the Finnish-Swedish Sign Languages. The rights of Sign Language users are acknowledged in the Constitution of Finland.

The estimated number of members in the Sign Language community is 5,500. They are divided into several sub-groups: the deaf, the hard of hearing, the deafblind and CODA, which is an acronym for the hearing children of deaf adults. Additionally, the Finnish-Swedish Sign Language is used by roughly 95 people.

Deaf people have practised performing arts in their associations since the very start of their association activities. These performing arts include plays, presentations and poetry reading in Sign Language, among other things. The tradition has lived on and continued to be passed on to new generations. The status of Sign Language has always had an important impact on the cultural life of the deaf. In the late 19th century, the use of oralism became widespread in the school education of the deaf, and Sign Language gradually became a banned language at schools. Pupils could even be punished for using it. The negative experiences even caused deaf people to learn to be ashamed of their own language. Starting from the 1970s, the deaf awareness movement began to influence the deaf community. It emphasised the right of the deaf to their own language and way of life and also strengthened the cultural activities of the deaf. 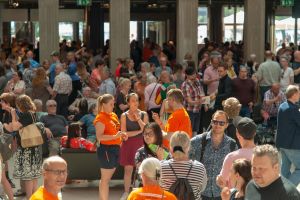 Participants in the lobby at the Culture Days in Hämeenlinna in 2018. Photo: Finnish Association of the Deaf.

The Finnish Association of the Deaf and its cultural production organise the National Culture Days of the Deaf every other year and the Cultural Event for Deaf Seniors on alternate years. The events are held in cooperation with local associations of the deaf. A large number of art enthusiasts who use Sign Language perform and compete amongst themselves at the Culture Days. The performing arts featured are stage performance, visual arts, crafts, photography and digital art. Separate competitions are held for individuals and groups in each category. During the weekend-long event, the presentations, performances and works are assessed by judges, and the event concludes with the announcement of the winners and the presentation of one-time grants to the best presentations, performances and works.

The event features a rich side programme, and it is an opportunity for Sign Language users from all around Finland to meet each other. For this reason, the event also has important social significance. The national celebrations have always been important opportunities to meet others, be together and discuss your own language, identity and culture. Different generations have also come together during the event. The local host association organises a side programme that includes a tour of the city and evening get-togethers, for example. It is estimated that the Culture Days are attended by roughly a third of the Finnish Sign Language community. 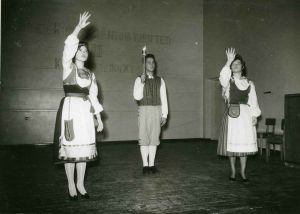 Signing of the poem Soihdunkantajat at the Culture Days in 1960.

The National Culture Days of the Deaf are deeply rooted in the spiritual heritage of the deaf community. The member associations of the Finnish Association of the Deaf have played a key role in the deaf community. Together with schools, they have passed on the culture, traditions and values of the deaf to the next generations. Associations have safeguarded interests and shared information while simultaneously upholding their own culture from early on. They have provided deaf people with a natural context for interacting in their own language, which has not been possible in the dominant hearing culture.

In major cities, the members gathered together on a weekly or monthly basis. The programme of evening get-togethers and annual celebrations featured plays, poetry reading, magic tricks, tales and presentations. Many associations set up their own theatre club, and arts were practised from the very start. Deaf individuals with rich Sign Language expression served as role models. The deaf artist Albert Tallroth was a developer of Sign Language expression who read his own poems in Sign Language with beautiful, smooth movements and also performed them with Sign Language choirs.

A proposal was made in the 1950s on culture days for young deaf people. The event’s programme would feature arts competitions, and it would be used to promote youth work, among other things. The first Culture Days were held at the Helsinki Association of the Deaf in 1956, and they immediately became enormously popular.

The poem ‘Soihdunkantajat’ (Torchbearers) by Lauri Pohjanpää was chosen as a mandatory part of the poetry reading programme at the first Culture Days. The content of the poem was a good fit for the spirit of the event, and a ‘torch of light’ became the symbol of the Culture Days. It symbolises the passing on of intellectual achievements and traditions from generation to generation. The event soon consolidated its position within the Sign Language community, and from there on, it was held in different municipalities every other year, with member associations of the Finnish Association of the Deaf taking turns hosting the event. Over the years, the programme was expanded with new competition categories. 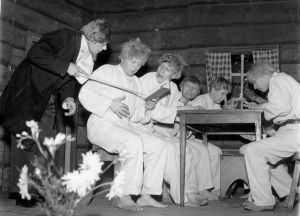 The play The Brothers Seven being performed at the closing ceremony of the 1956 Culture Days.

The first eight Culture Days were events for young people. However, the age of the participants began to increase, without the enthusiasm abating. In 1973, the competitor age limits were removed, and the event’s name was changed to the National Culture Days of the Deaf. From 1981, separate cultural events also started to be held for the elderly.

The cultural heritage of children has also been emphasised at Culture Days. Adults are responsible for upholding children’s Sign Language culture and heritage in such a way that children form a strong identity that helps them achieve a balanced and happy adulthood. When cooperation was launched with the cultural department of the Finnish Association of the Deaf and teachers of schools for the hearing impaired, children also became able to participate in competitions. A significant change was implemented in 2008, when hearing users of Sign Language also received the right to participate in all competition categories.

Years when the Culture Days were held: 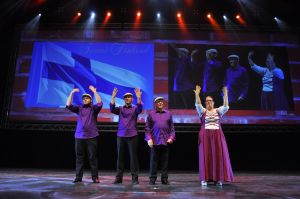 Hosts on the stage at the Culture Days in Tampere in 2014. Photo: Finnish Association of the Deaf.

Over the course of the history of the Culture Days, the competition categories have varied according to the recreational activities practised at associations and schools and among individual Sign Language users. The competition categories featured at the first Culture Days were drawing, poetry reading, storytelling, presentation and Finnish folk dance. New categories were later introduced, increasing the interest towards the event. These included plays, sports demonstrations and choir performances, among other things. With the rise of deaf awareness, deaf people began to create their own plays, which depicted collisions of the worlds of the deaf and the hearing, for example. Young people in particular had a desire to create something new in their own first language. The Culture Days already featured quizzes and competitions in various arts during the 1960s.

The history of the Culture Days can be seen as upholding old traditions on the one hand and as a search for direction on the other hand. The changes that have taken place in the Sign Language community, such as the deaf awareness movement and Sign Language research, have influenced the performance categories featured at the Culture Days. This has primarily been interpreted in such a way that the appreciation of Sign Language has led to an increase in the appreciation of the community’s own culture and the richness of expression in its own language. 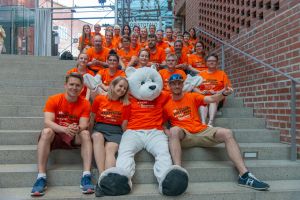 Employees with the mascot at the Culture Days in Hämeenlinna in 2018. Photo: Finnish Association of the Deaf.

The National Culture Days of the Deaf continue to be attended by a large group of deaf people, hard of hearing people and hearing people who speak Sign Language as their first or native language. They represent many different age groups. The Culture Days continue to feature competitions in various arts, in which the competitors try out and showcase new forms of expression. The Culture Days have been attended by almost a third of the Finnish Sign Language community. Additionally, the Culture Days are a networking event for organisations in the field and various other parties as well as a place to discuss current topics. In addition to the cultural programme, people come to the Culture Days to meet new and old acquaintances and enjoy the varied side programme. The event is also always highly visible in the street scene of each host municipality, and it makes Sign Language culture visible to the majority population. In other words, the Culture Days have a strong future, and they are considered to be a significant cultural event on account of their long-standing history.

Finnish Association of the Deaf