Over 2,000 species of large mushrooms, i.e. mushrooms that are more than 1 cm in size, grow in Finland and at least few hundred of them are edible. The annual mushroom yield is around 1.5 to 4 billion kilos, of which humans harvest about 2–10 million kilos. 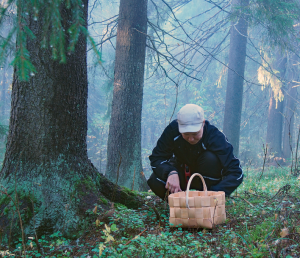 Picking up mushrooms in an old forest is a great experience. Photo: Lissu Rossi 2015.

Identifying and using mushrooms are skills that have mostly been passed down the generations as oral tradition, and even today in Finland the majority of Finns received their first lessons regarding mushrooms from their families or relatives.

The Finnish Mycological Society was established in 1948. The society has two publications: Karstenia, intended for scientific research results in the field of mycology and Sienilehti, a journal intended for hobbyists. In the 1970s, regional mushroom associations were established under the name of the Finnish Mycological Society in order to promote identification of mushrooms and their use for food. In 2017, 14 active regional mushroom associations were operating in Finland.

The central organisation for vocational education started the training of commercial mushroom pickers in 1969. The objective was to increase the utilisation of wild mushrooms – as much of the yield of edible mushrooms is left unpicked – and ensure the safety of mushrooms sold. Today, The Finnish Food Safety Authority Evira maintains a directive list of marketable mushrooms, i.e. recommended edible mushrooms. In 2017, this list featured 23 mushroom species or aggregates.

Today, in addition to mushroom associations, information about edible mushrooms is shared by, for example, museums of natural history, community colleges and adult education centres, the Martha organisation and the Arctic Flavours Association. The best ways to learn to identify mushrooms are participating in a guided mushroom excursion or visiting a mushroom exhibition. 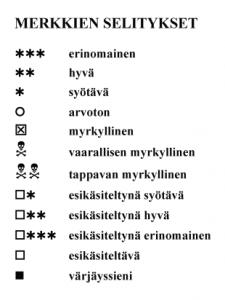 Picking edible mushrooms is by far the most popular mushroom-related hobby in Finland. Most often, people go mushroom picking from their own front door or their summer cabin, going to nearby forests. Mushroom picking is easy in Finland, as the public right of access allows everyone to pick wild mushrooms, even on land owned by someone else, as long as they do not go too close to houses or yards. Picking edible mushrooms is usually also allowed in nature reserves, excluding the national parks with strictest protection policies.

The Finnish mushroom tradition includes usability labels for mushrooms. The first scale used was mostly based on the estimates of Professor Toivo Rautavaara. Since then, these labels have changed many times. The Finnish view on the usability of mushrooms has always been slightly different from that of other countries. For example, many species of lactarius that are considered good, edible mushrooms after boiling them are labelled as poisonous in some European countries. Untreated, false morel is deadly poisonous, but in Sweden eating it is not recommended even after careful boiling. 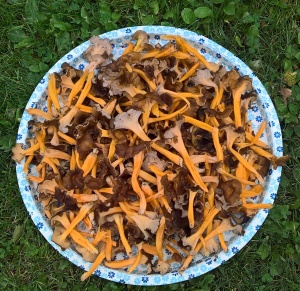 Yellow Foot is an excellent edible mushroom with a usability label of three stars.

Edible mushrooms often require pretreatment. Mild-tasting mushrooms are usually just roasted on a dry skillet until excess fluid has been removed. The tart russulas, most lactarius species and, for example, Armillaria borealis and shaggy parasol mushrooms need to be boiled for 5 to 10 minutes, depending on their level of tartness. Gyromitra esculenta growing in spring are deadly poisonous when fresh, so they need to be parboiled twice, for five minutes at a time. The water must be changed in between. The mushroom’s poison dissolves in water, so the kitchen must be kept well ventilated during the boiling process.

At the beginning of the last century, mushrooms were usually served as a side dish to potatoes. They were made into a milk-based stew or fried with onion and fatty pork. Salted mushrooms mixed with cream and onions as well as various mushroom stews are still popular side dishes to potatoes.

Mushrooms have also been used in soups. In the past, ‘ripakeitto’ was a traditional Karelian dish; a soup with dried leccinum species mushrooms, potatoes, onion and barley groats. Patties and balls made of minced mushrooms are also part of the old mushroom dish tradition. Mushroom fillets rolled in egg and flour were made of mushrooms with thick, fleshy parts, such as albatrellus ovinus and boletaceae.

Picking edible mushrooms is not the only mushroom hobby. Mushrooms can also be used for dyeing, for example. Certain mushroom species are excellent for dyeing various natural materials, such as wool yarn. The blood red redcap yields the strongest red and orange hues.

Some mushroom hobbyists specialise in the continuous development of their skills in identifying mushroom species and in mycological research. These people often work closely together with the museums of natural history. In 2016, an extensive Sieniatlas (mushroom atlas) project was launched by museums of natural history and the Finnish Mycological Society. Its objective is to gather information about the distribution of mushroom species, their habitats and endangerment. The project collects the observations of both hobbyists and researchers into a database that can be freely utilised by anyone.

The current Finnish mushroom picking culture has spread to Finland from two different directions. In Sweden, the mushroom dish culture returned in the late 19th century, when the French Jean Baptiste Bernadotte became the King of Sweden, taking the name Karl Johan XIV. Like his countrymen, he has a taste for ceps, which is why the mushroom received a nickname ‘karljohan’. The Swedes brought the use of boletaceae and chanterelles to Western Finland. 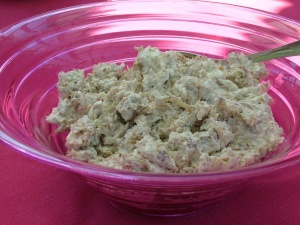 The traditional creamy mushroom salad is often made of lactarius trivialis mushrooms.

In Russia, using mushrooms for food has been much more common than in Finland. Utilising ‘milk mushrooms’, i.e. lactarius species, spread to Eastern Finland from behind the border. When the Karelian evacuees moved to different parts of Finland after the wars, this promoted the spreading of eastern mushroom traditions and the merging of eastern and western mushroom traditions.

Harvesting mushrooms for food requires a much more careful approach to identification of species than picking berries, for example. Of the thousands of mushroom species growing in Finland, a few dozen are poisonous to humans. Identifying mushrooms is a skill that has mostly been passed down the generations as oral tradition, and even today in Finland the majority of Finns received their first lessons regarding mushrooms from their families or relatives. The first Finnish mushroom guide, ‘Sienikirja eli Sieni-Kallen osviitta tuntemaan ja käyttämään syötäviä sieniä’ (Book of mushrooms i.e. Mushroom-John’s guide for identifying and using edible mushrooms) by E. Hisinger, originally written in Swedish, was published in 1860.

The most notable pioneer of mycology in Finland was P. A. Karsten. His magnum opus, published in 1871, was the over 1,000-page long ‘Mycologia Fennica’, which presented up to 1,662 species of mushroom. After Karsten, Finnish mycology stopped for a long time. It was not until 1947 that Professor Toivo Rautavaara published his thesis about the mushroom yield in Finland. A year later, the Finnish Mycological Society was established and it is still in operation today.

In addition to mushroom associations and museums of natural history, the Martha organisation has been actively distributing information about mushroom for over a hundred years. The main focus of the Martha organisation’s mushroom information has been the identification of edible mushrooms and sharing of mushroom recipes. During times of scarceness, in particular, Finns were encouraged to harvest free food from the forests. 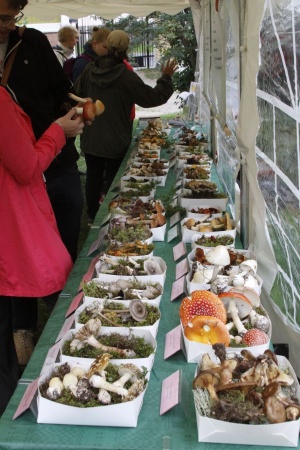 Mushroom exhibitions are a great place for practising identification of mushroom species with the help of experts. If the harvest is good, the exhibition may showcase up to a few hundred different species.

Today, many Finns also look for mushroom information online or through social media. The most popular social media channel in Finland is Facebook, which offers several groups dedicated to mushrooms and mushroom picking. The most popular of these is the public group of the Finnish Mycological Society, which had over 22,000 members in April 2017. The purpose of the group is to encourage the people in determined, responsible learning of species. The group can be very busy, especially in autumn, and the group members can publish hundreds of pictures a day on the group’s wall. Most threads start with a request to identify the species. However, the discussions emphasise that no one should eat a mushroom they picked just on the basis of photo identification done through a Facebook group, but that real identification is based on careful practice, preferably with the help of experts and literature.