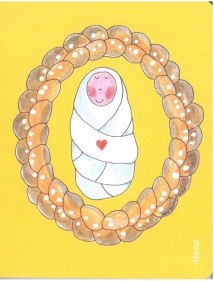 Rotinas, gifts for a newborn baby and the family, have been given to families all over Finland, even though the name of the tradition has varied. The rotina tradition has been, and still is, particularly strong in Eastern Finland, where it is still practised. In other parts of the country, the tradition is more familiar to older citizens. Rotinas is a woman-centric tradition.

Rotinas refers to gifts of food given to a family with a newborn child. The purpose is to take food to a mother that has recently given birth, so that she will have time to rest and focus on the baby. Also these days, people coming by to see the baby bring something to eat, so that the baby’s family does not need to find something to put on the table. This is often the case even if people are not familiar with the tradition.

The word ‘rotinas’ is based on a Russian word ‘rodiny’, which refers to a birth, or a childbed. In south-eastern Finnish dialects, rotinas refers to gifts taken to a woman who has recently given birth, usually food or baked goods. It did not include a feast at the house but instead only referred to the gifts. Rotinas is considered to be a Karelian tradition, and the gifts reflect the Karelian food traditions, as most of rotina gifts were made in the oven. In Eastern Finland, food was mostly made in the oven, and in Western Finland mostly on the stove. The basic purpose of rotinas is to make recovery easier for the mother and help her recover her strength with a hefty food basket. In Karelia, rotinas gifts were plentiful and made of the best ingredients. They were delivered in a rotina basket, which was a lidded, shallow, oblong, box-shaped container. The gifts packed in the basket included a large, sweet bun, pastries, barley scones, butter, and maybe even cooked meat, such as smoked roast mutton. In the Central Karelian Isthmus, special rotina pastries or pies were made at the beginning of the 20th century. The descendants of the local population still make these to take as gifts to families with newborn babies. The crust of these pastries is made of wheat bread dough and they are stuffed with boiled rice and raisins. The mixture is sweetened with sugar.

In the 1930s, cookies and Bundt cakes (such as spiced cakes and sponge cake) became more popular as rotina gifts. After the Second World War, rotina gifts still included a large, round bun with a hole in the middle, a cake and gingerbread cookies, and sometimes also pastries. A Karelian tradition was to fill the hole of the wheat bun with cookies or eggs. After the war, rotina gifts became more and more about sweet things, as people started to value sweet food more and, for them, sugar represented a tangible escape from the bleakness of wartime. Meat and butter were left out of the rotina basket and layered cakes became more popular.

Part of the tradition was that the rotina gifts were taken to the family as soon as possible. When neighbours saw that people in the house waiting for the baby’s birth started to warm up the sauna in the middle of the day, they started to bake the rotina gifts. It was a matter of honour to deliver plentiful rotinas as soon as possible. Often, bakers would compete to see who was the first to deliver the freshly-baked goods. Rotinas had to be delivered without being prompted, quickly, and they needed to be as fresh and attractive as possible.

Rotinas gifts were mainly a job for loved ones and relatives. In rural areas, neighbours and villagers also saw rotinas as their duty. Rotinas was mainly a female-centric tradition, although men also took part in the gifts and gave the child a ‘tooth coin’. The tooth coin had to be a hard coin, in order for the child’s teeth to grow strong. The coin was placed under the child’s pillow. Tooth coins were used to buy something useful for the child, such as fabric for dresses for girls.

Various gifts have always been given to newborn children and their mothers, but elsewhere in Finland, the word for this was ‘varpaiset’ or ‘varpajaiset’, loosely translated as ‘tiny toe party’. Originally, the tradition included gifts of food, but later it started to refer to a small feast held after the birth. Varpaiset also referred to the shots of spirit the new father would offer to the male guests, or which the men would bring to the father in order to honour the child’s birth.

In Savonia, ‘saunas’ were given to the ‘sauna woman’. Saunas referred to the fact that children were born in a sauna, and the contents of sauna gifts were very closely related to rotinas. In Savo, the gifts often included pastries, such as unleavened flatbread and scones, as well as butter, eggs or other foodstuffs. A common denominator for rotinas and saunas was that neither word was used to describe a feast, but only referred to food gifts.

In the dialects of Ostrobothnia, a mother giving birth was called a ‘pirttivaimo’, a sauna wife. Instead of rotinas, people in Ostrobothnia delivered a ‘pirttipussi’, loosely translated as a sauna bag. The gifts in these bags were also food. The bags held milk, cheese, porridge and other Ostrobothnian delicacies. Rotinas was not the word used everywhere in Karelia, either. In the historical region of Raja-Karjala, a similar tradition was referred to as ‘going for a juuvi’. Juuvi referred to a plate.

The rotinas tradition came to the Southwest Finland, Tavastia, Satakunta and Uusimaa regions along with Karelian migrants. It was not practised in these areas before that.

Traditions are passed forward through example. Many associations and organisations hold up the tradition, such as Martha associations. As an example, the Martha Association published a small book about the tradition, "Martan rotinakori", in 2005.

Rotinas is a valuable tradition that will probably continue in the future. In addition to pastries, casseroles are a good gift for a family with a newborn baby. A little help from friends and neighbours is welcome and brings joy to a new family. In the midst of all the abundance in today’s world, the rotinas maker also shares their time and effort by making something from scratch. That is, after all, the most valuable part of a gift.

Today, the rotinas tradition is still being upheld; visitors bring baked goods or clothes when they first come to see the new baby. There are regional differences, and some people have not heard about the rotinas tradition even if they do bring food or other gifts to a family with a newborn. A modern rotina basket could include, in addition to the sweet buns, cakes and cookies, a savoury pie or a bowl of salad, for example. The thought behind this is that the mother of the newborn would have time to rest and could focus on the baby without worrying about what to serve to her guests.