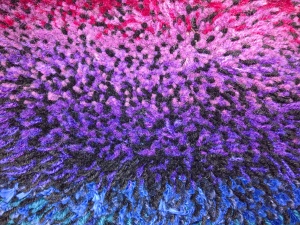 Ryijys are made by crafts enthusiasts all over Finland at courses held by the Finnish Crafts Organization Taito, adult education centres and community colleges as well as art education groups, for example. There are also smaller, private hobby groups actively participating in this activity. There is a group called ‘Ryijy, suomalainen perinnetekstiili’ (Ryijy, traditional Finnish textile) on Facebook that has over 3,000 members. Ryijy making can also be learned with the support of peer-to-peer learning through YouTube videos, among other things. In addition to those who have a recreational interest in the ryijy tradition, there are professional artisans and artists who make and design ryijys. Ryijys are also designed and made at crafts courses in comprehensive school. Ryijy designs and material packages are sold by crafts companies. Ryijys have been preserved in museums, and there are also collectors who have collected old ryijys. Those who are interested in interior decoration make ryijys trendy in interior decor every now and then. The ryijy tradition has also been researched, and several books and articles have been written about it.

Traditionally, ryijys, which are knotted-pile textiles, have been used as large blankets, wall hangings or seat covers. Today, small ryijys are also being made, and their purposes of use are not limited to wall decorations.

Ryijys have traditionally been woven on a loom. The pile yarn is tied to the warp yarns, and base weft is woven in between the rows of pile. Usually, 3–4 yarns are attached to each pile. Yarns of different colours in the pile form surfaces of colour that are rich in nuances. The most commonly used ryijy knot is the same knot used in Oriental carpets: the Smyrna knot, also known as the Ghiordes knot or Turkish knot. Ryijy pile is usually made using yarn, but other materials are also used. 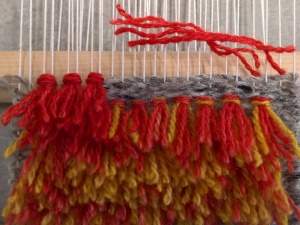 Ryijys are made based on designs provided in material packages or by designing your own ryijy.

The word ‘ryijy’ comes from the old Scandinavian word ‘ry’, which referred to a knotted-pile blanket. Detailed information on early ryijys has not been preserved, but it is assumed that fishermen living along the coast learned the ryijy tradition from the Vikings. Ryijys were practical items on sea voyages, as they served as warm capes during the day and as a blanket at night. Wool textiles withstand saltwater and getting wet better than hides, the leather surface of which hardens when it gets wet. It is easy to imagine that knotted-pile blankets were created by imitating the idea of hides: fur was woven on fabric.

The earliest certain mention of the existence of ryijys in Finland dates back to the mid-15th century, when Olavi Niilonpoika, Häme Castle’s castellan, is known to have owned a ryijy. Ryijys were made as bedcovers by professional weavers who worked in workshops at castles or in the employ of manors owned by the Crown. People who learned their skills at castles and manors spread them to the surrounding areas. From castles and manors, ryijys spread to the homes of the bourgeois and, from there, to the homes of peasants.

The earliest ryijy blankets were thick like hides, densely woven and warm. Ryijys were used in such a way that the pile faced the sleeper and the smooth base fabric was on top. Ryijys with pile on both sides became common in the 18th century. One side of the ryijy warmed the sleeper while the other side served as a decoration. When ryijys became decorative bedspreads and later textiles hung as decorations on the walls, pile was no longer woven on the back.

The decorative motifs on ryijys were most likely adopted from other textiles typical at the time. The gentry adopted patterns from tapestries and needlework samplers, among other things. Rural women employed by manors and parsonages as weavers passed ryijy patterns on to folk ryijys based on their recollections. Neighbours would copy patterns from each other. Local ryijy weaving areas with their distinctive patterns and colour choices emerged. Ryijys were woven by the matrons and daughters of houses, but professional travelling ryijy weavers were also utilised when necessary.

The late 18th century and first half of the 19th century are considered the golden age of folk ryijys. Ryijys were included in the dowries of daughters and sometimes sons as well. The bride and groom were wed on top of a wedding ryijy, which was used as a blanket after the ceremony. A wedding ryijy was believed to protect and bring happiness to the couple, but it also indicated the prosperity of the house. The use of wedding ryijys has continued to this day, and even now many parishes have a wedding ryijy that is brought out for wedding ceremonies.

The ryijy tradition was in danger of disappearing after the mid-19th century, when cotton-filled blankets started to replace ryijys as blankets. Interest in ryijys was rekindled thanks to the national romanticism of the start of the 20th century. Painters, such as Akseli Gallen-Kallela, became interested in ryijys. Gallen-Kallela collected folk ryijys and also designed one of the most famous Finnish ryijys, the Liekki (Flame) ryijy, which was featured as part of the interior decor of the Finnish Pavilion at the 1900 Paris Exposition. The Liekki ryijy was a ‘bench ryijy’ that covered the seat completely and extended far along the floor. Liekki was made by the Friends of Finnish Handicraft, just like several other Art Nouveau style ryijy designs created by architects and artists at the beginning of the 20th century.

National pride in feats of craftsmanship from previous centuries flared at the same time as patriotic enthusiasm. Old ryijy blankets and wedding ryijys, i.e. former utility textiles, were turned into decorative wall textiles. The sale of ryijys to crafts enthusiasts by mail order increased exponentially at the turn of the 1920s and 1930s. Ryijys were sold both as readymade textiles and as material packages that allowed people to sew or weave the ryijys by themselves. Photos of ryijys and ryijy designs were published in several newspapers and magazines. Parties that provided ryijys (e.g. the Friends of Finnish Handicraft and Neovius) published their own collections of ryijy designs. Ryijy designs were created by many of the well-known textile artists of the era.

The end of the 20th century marked the start of a new phase in the history of ryijys. Not many people had space for large wall ryijys, but miniature ryijys could fit into small apartments. Interior decorators could enliven their home with a single wall ryijy or by combining miniature ryijys into a whole that was to their liking. New ryijy designs were created, and traditional designs were also adapted for miniature ryijys. The designs spread in the form of material packages. The tradition of making your own ryijy lived on. 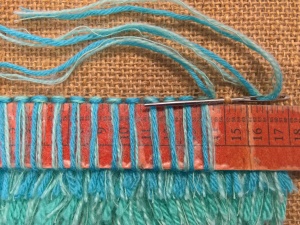 Traditionally, ryijy making skills and designs, as well as the tradition related to their use, have spread from house to house and been passed on from older members of the family to younger ones. At the end of the 19th century, people also started to collect ryijy designs and publish them in books and articles. The Friends of Finnish Handicraft, which was founded in 1879, took on the task of archiving traditional ryijy designs that would serve as models for new textiles. The association organised the first ryijy design competition in 1904. Ryijys preserved in the collections of museums and collectors are ryijys that were appreciated and passed on as inheritance from generation to generation. Simple ryijy blankets never made it to museums, as they were used up or otherwise destroyed.

Ryijy designs and the instructions for making them have also been passed on through ryijy material packages since the 20th century. The ryijy tradition has also garnered attention through numerous exhibitions of ryijys. Ryijys have changed with the times thanks to ryijy design competitions, among other things. Ryijys have also been researched. The first study completed about the topic was a study on textile history called ‘Suomen ryijyt’ (Ryijys of Finland), published by Professor U. T. Sirelius in 1924.

The ryijy tradition also evolves and is passed on through teaching. Ryijy making is taught at educational institutions at different levels of education, including comprehensive schools, basic art education, liberal adult education, crafts advice courses organised by associations and among enthusiasts. The ryijy tradition also evolves and lives on in social media in the form of interior design blogs and on Pinterest, among other things.

Ryijy making becomes popular again every now and then, as ryijys have proven themselves to be adaptable. Enthusiasts and professionals keep finding new manifestations for ryijys. Examples of the evolution of ryijys include ryijys as chair covers, graffiti-style ryijys and pixel ryijys made of tufts. Through their new manifestations, ryijys garner new interest. Grandma’s old ryijys also continue to speak to new generations. Ryijys are associated with nostalgia related to home and the past. Ryijys are also interesting as a form of slow work; in the light of current brain research, ryijy making is beneficial to well-being, as doing things with your hands boosts concentration, among other things.

The ryijy tradition is alive and well, which is evidenced, among other things, by the work and awarding of Jenni Vanhanen, who was chosen as the Artisan of 2019.

The Friends of Finnish Handicraft

The Craft Museum of Finland