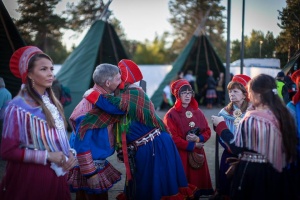 The Sami are the only indigenous people of the European Union. The status of the Sami was written into the Finnish constitution in 1995. They have, as an indigenous people, the right to maintain and develop their own language, culture and traditional livelihoods. There are about 9 000 Sami in Finland. More than 60 per cent of them now live outside the Sami Homeland. The total Sami population is estimated to be over 75,000, with the majority living in Norway.

The colouring of traditional Sami handicrafts is based on natural colours. Duodji, the traditional Sami handicraft, is still an essential part of everyday life and celebrations of the Sami people. The Sami art crafts are also based on duodji. The different language and cultural groups of the Sami people have their own duodji traditions, decoration and ornament styles and colour use traditions. Additionally, there is some regional variation within each cultural group, and the different Sami families also have their own handicraft traditions.

Sami artisanal handicrafts, duodji, has been an interesting field for researchers, travellers and other enthusiasts for a long time. Around 50 years ago, Sami people themselves brought Sami handicrafts up in discussions and research subjects. Traditionally, Sami handicrafts have been functional items for the different needs of everyday life and the different livelihoods and ways of life. Materials have always played a central role in the creation process of Sami handicrafts. The lunar cycle, the weather and natural conditions have all had an impact on the natural materials and their procurement. Due to cultural exchange, trading and the development of handicraft materials, the materials have also developed and changed. However, reindeer hide, wood, bone, horns, furs, fish skin, roots and their ecological utilisation still have a vital role in the handicraft tradition.

The patterns and colours of decorations (hearvvat in the Sami language) used in traditional Sami costumes, headdresses, trousers and ropes signify the wearer’s family or larger regional community. The ornaments and symbols of the visual language have reinforced the sense of community. In the same way, the modern visual world and its symbols, such as the Sami flag, colours and logos, bring together the Sami people living in different countries. 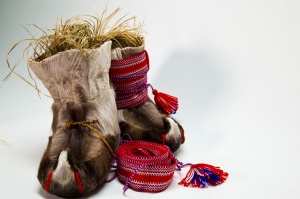 Traditionally, the duodji skills and traditions pass on from one tradition to another. The Sami handicraft tradition became endangered due to the societal processes of the 20th century. The tradition has become part of basic education and vocational education, but opening up handicraft education to all those interested has brought on some ethical problems and has hindered the employment opportunities of Sami artisans. The Sámi Duodji organisation, Sami artisan handicrafters, the older generations and the development of legislation and teaching are vital factors in securing the Sami handicraft tradition. The Sámi Duodji Association teaches the making of Sami handicrafts. Teaching takes place in the training centres in the Sami region in Inari, Jokkmokk and at the Sami Institute of Higher Education (Sámi Allaskuvla) in Kautokeino.