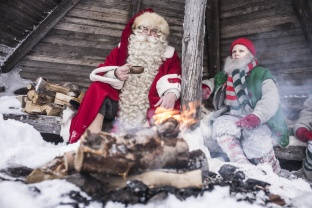 Santa Claus and an elf enjoying a cup of coffee by a lean-to in December 2015. Photo: Kimmo Syväri. Visit Finland image archives.

For twenty years now, the Yleisradio news has made a short TV clip for international distribution, showing Santa Claus’ departure from Lapland. Before Christmas 2016, it was sent to 80 different countries and through the international broadcasting companies it spread all over the world to the countries celebrating Christmas as well as to current affairs programmes of China’s national TV broadcasting company CCTV and to some Islamic countries, such as Malaysia and Indonesia. The Christmas season’s opening ceremony events are held at many Finnish cities, and Santa Claus plays a central role in them. The Christmas season’s opening ceremony held at the Arctic Circle in Rovaniemi, Finnish Lapland, has been organised through cooperation between local operators for decades, at the turn of November and December.

The Finnish way of celebrating Christmas usually means that families spend Christmas together, spending time with each other and eating a traditional Christmas meal. In families with children, in particular, Santa Claus also visits the families at the family’s home. Traditionally, Santa Claus first asks if the children have been good. After this, the youngest children may sometimes sing him a Christmas carol, nervous and blushing up to their ears. After this, Santa Claus usually starts to share out the Christmas presents and the children usually help him with this task. In Finland, most children truly believe in Santa Claus even up to school age. An essential part of the Finnish tradition is that Santa Claus lives on Korvatunturi fell in Lapland, where there is snow and reindeer that pull Santa’s sleigh. From the beginning of the tradition, Santa Claus has worn a long coat with a sheep’s-wool lining, and over time the coat’s colour became red. Another essential feature of the tradition are the elves that build presents in their workshop all year round. The elves traditionally wear a grey broadcloth costumes and all of them, Santa included, wear a red Christmas hat.

Waiting for Santa on Christmas Eve is an essential part of the Finnish Santa Claus tradition. Because of the youngest children, Santa Claus usually visits the family in late afternoon so that the rest of Christmas Eve and the family’s own traditions can go on without a hitch.

Children still write letters to Santa before Christmas, mostly with Christmas wish lists. In some letters, the children also tell Santa how good they have been and what good deeds they have done. Since 1985, the Santa Claus' Main Post Office in Rovaniemi at the Arctic Circle has received about 18 million letters to Santa. In recent years, Santa Claus has received over 500,000 letters a year from about 200 different countries. In 2016, Santa Claus received the most letters from China, Italy and Poland. 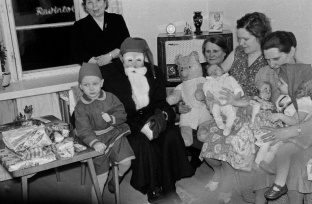 The Finnish Santa Claus is made of many different ingredients. He is a cross between the European gift-giving creatures and the ugly goat-like creatures that visited homes on St. Knut's Day in Finland. The most important role model for the Finnish Santa Claus, however, was Saint Nicholas, who, according to the most well-known story, was a bishop who lived in the 4th century in Myra, in Asia Minor. Nicholas was a pious man, a philanthropist and a protector of children, especially orphans. He helped his subjects in many different ways. For example, Nicholas gave gold coins to a poor man so that he would have a dowry for his daughter and she could marry. As a bishop, Nicholas became an invisible, secret benefactor. The saint’s reputation spread to many countries and people started giving gifts on his anniversary, on 6th December. The Dutch, for example, still receive their gifts on this day. The America Santa Claus is an adaptation of Saint Nicholas.

Dutch migrants brought their gift-giving tradition to America, where people started to connect Saint Nicholas to the Christian Christmas instead of the 6th of December. Saint Nicholas transformed into Santa Claus and became a fat, jolly, old and fatherly figure. The American Santa Claus lives at the North Pole and arrives the night before Christmas, riding a sleigh pulled by reindeer and dropping gifts down the chimneys. The ancestors of the Finnish Santa Claus were nuuttipukkis, St Knut Day’s goat-like creatures that visited homes, but not to give gifts – instead, they asked for food and drink, especially liquor or beer. The St Knut Day’s tradition is still alive in few areas in Satakunta.

The Finnish Santa Claus has also been greatly influenced by his American colleague. However, the Finnish Santa Claus visits children in person and gives them presents, whereas the American Santa Claus can only be seen in department stores. These personal visits to children’s homes are the most Finnish aspect of our Santa Claus, and it comes from the St Knut Day’s nuuttipukkis. Santa Claus has visited homes since the 1920s, and gradually the tradition became more common through all social classes. In the beginning, Santa Clauses usually visited bourgeois homes. During the wars, Santa Clauses also entertained the troops on the front lines. 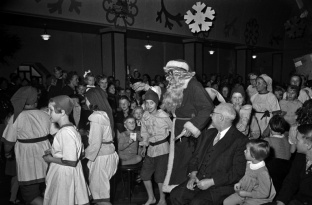 In families, the Santa Claus tradition passes on from one generation to the next, developing and maybe adopting new features. Old photos in family albums or picture folders on computers as well as the memories of the eldest in the family should be kept in mind when planning future Christmas celebrations. The tradition passes through families and the procession of Christmas Eve has been learned at childhood homes, and people aim to follow at least some experiences remembered and cherished by the eldest family members.

Elävä Arkisto, living archive, maintained by the Finnish Broadcasting Company, is a service open to all, where people can view film and video material about Santa Claus from past decades. The Finnish Literature Society (SKS) has collected Finnish Santa Claus experiences, which have been quoted in some books about Christmas, but the archive materials are not as easily accessible as those of the Finnish Broadcasting Company. Finnish libraries have also often offered special promotion shelves for Christmas books in November and December. Today, Santa Claus also has a strong presence on social media: on Facebook, WhatsApp and, for example, the Chinese Weibo and WeChat. 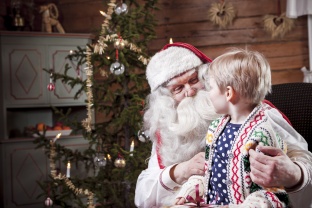 This tradition will remain a part of the Christmas celebrations of Finnish families, at least for the families that spend Christmas in Finland. Due to the stricter holiday rules of schools, families take more holidays abroad during the Christmas holiday. In such cases, they will leave out Santa Claus’ visit and only keep the tradition of giving gifts. This may affect the Christmas celebration traditions of future adults. Christmas in itself is such a strong part of Finnish culture that the tradition is not in danger of vanishing from people’s minds, but it may change its form. The thoughts mentioned in the section Safeguarding the tradition may have a positive effect on the Finnish Santa Claus tradition. Similarly, carrying out a potential review of the necessity of a Finnish Santa Claus strategy and its potential implementation will strengthen the preservation and development of the Santa Claus tradition.

With regard to the future of the tradition, the story of Santa Claus is important; what should it be and for what purpose could it be needed? Promotion of commercial purposes cannot be the only reason for preserving and developing the Santa Claus tradition. The Santa Claus Foundation is currently reviewing whether Finland should have a national Santa Claus strategy. The purpose is to facilitate Santa Claus’ duty of promoting good deeds and being good as well as being rewarded for such acts, thus preventing the use of Santa Claus for promotion of purely commercial interests. The Santa Claus Foundation can also now more actively suggest Christmas-themed materials to the media well in advance of the Finnish Christmas season. All year round, the public can visit Santa Claus in Santa Claus’ Office in Rovaniemi. The Finnish Santa Claus also welcomed foreign cruise passengers in Helsinki West Terminal for the first time during the summer season of 2017.