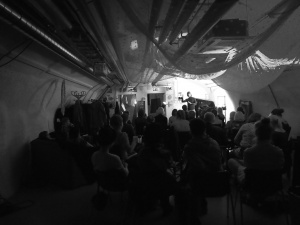 The open stage section, where the audience can tell their own stories, has become an important part of the evenings. People have a desire and a need to be seen, to be heard, to participate and share their experiences and stories. The event’s atmosphere is intimate and accepting, which means that the threshold for participating on the open stage is low. 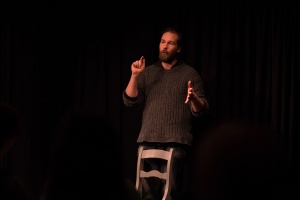 Oral storytelling has always been a part of human culture. It is said that it is one of humanity’s oldest art forms, in addition to cave paintings, dance and singing. Before the art of printing became common, it was also an important way of preserving and sharing the history, teachings and norms of communities, in addition to providing entertainment. Over time, people have gathered together to share stories. This has been done around campfires, during forest work, in tea rooms, on hikes, at funerals, and in office break rooms. In addition to everyday situations, stories have also been told at royal courts and in the marketplaces of cities. Myths and folk tales are part of our common oral tradition, which has been preserved and developed by both tellers of campfire tales as well as the professional storytellers at court, both in their own ways.

The role of storytellers in society has changed significantly due to the influence of literature, television and radio. Even though the number of practitioners of oral folklore has diminished over time, traditional folk tales, stories and poems have always interested people. Storytelling creates a path to these traditional stories, but it also acts as a means of communication and meeting people in the present day.

More and more people are interested in participating and telling their stories. New and different story clubs are held in different parts of Finland. The Shaibalaiba! Story Café and the Samova ry association cooperate with many different parties, both in Finland and abroad. Future plans include organising workshops and training, increasing cooperation with international storytellers, and developing the Tuulen tuomaa (‘Brought by the Wind’) – Helsinki International Storytelling Festival that has already been held once into a regular event.

Haggarty, Ben 2005. Seek out the voice of the critic (Canadian edit). http://benhaggarty.com/ben/critic.pdf