Finnish shoe types have always been very functional because of the climate. A footwear protects from the cold, withstands moisture and breathes in sweltering heat. Shoes are considered durable goods and worn a long as they held together. Before industrially manufactured, footwear common people in towns and the countryside bought footwear from the village cobbler or the master shoemaker, or even made their own shoes.

Today handcrafted shoes in Finland are made for individual customer by made-to-measure or customer may choose shoes from an existing collection. These skilled professionals can make a shoe from an idea to the final shoe. Professional shoemakers are educated in vocational schools or applied science universities. 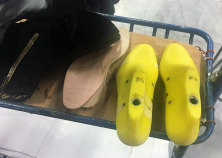 A last, insoles and a shoe upper (picture: Merianne Nebo)

Traditionally shoe making takes up to 200 stages of operations. In Finland, shoe making is still, mostly made by human hands. The most important difference between industrial and handcrafted shoe making is in the operation where assembled shoe upper is formed around plastic or wooden last shape. Industrially, it is made by machines and in a handmade process is made by human hand. Even though shoes are manufactured mainly industrially, many operations need people to operate. Maximum craftsmanship is needed when shoemaker assembles upper pieces and sole with a hand needle.

Shoe making is based on assembling upper and sole together in various ways to form a shoe. Most often shoes are moulded around the last. Shoes can be made by hand or by using machines. Shoes are made for an individual customer or they are manufactured in standardized bulks.

Traditional shoe making technique is Welted Construction. Upper of a shoe is attached to insole by stitching. Then sole is attached to upper and welt by stitching. This technique is the most common in making men`s high quality classical shoes. Finland has just a few cobblers or artenomes using the method. They use high quality materials. Making shoes is time consuming. The price of the shoes can reach up to 1000 euros. Khoisan people form South-Africa invented Vedltschoen or Stitch-down shoe construction. Europeans brought the construction to Europe during World War- times. The technique was practised also in Finland. In today`s Finland some handcraft entrepreneurs are using the technique. In vedltchoen technique upper of the shoe is attach to sole by stitching.

Cemented construction or stuck-on construction were introduced to shoe business in 1960`s. The upper of the shoe is attached to insole and then to sole by glue (adhesive). It soon became the most popular technique in the industry and in handcraft shoe making because of its low cost.

Cobblers went around homes to repair or make households’ shoes. In villages cobblers made ”customized footwear” up till late 1940`s. Boots with long leg part were generally used among men and mid high boots among ladies. Low shoe types became common in Finland along with urbanization in 1950`s.

Finland has many traditional handmade shoe types. One of them is a birch bark shoe. Shoes are made by beading birch bark straps together. Finnish Boots or Lapikas are made of vegetable tanned leather, also wooden handmade nails are used. Supikas are shoes which are used with traditional costumes. They are also made of vegetable tanned leather. The Felt Boots came to Finland from Russia. Felt boots are made of wool, they are warm winter boots. Tallukas boots are from Pirkanmaa region. They were made out of old heavy textiles. Many layers of textile were sewn together to form a shoe.

In olden times cobblers made men`s boots and ladies ankle boots by welted construction. The technique was the most common shoe technique also in the beginning of industrial manufacturing era. Many types of turn-over-shoe techniques were used in industrial or handcrafted shoe making. 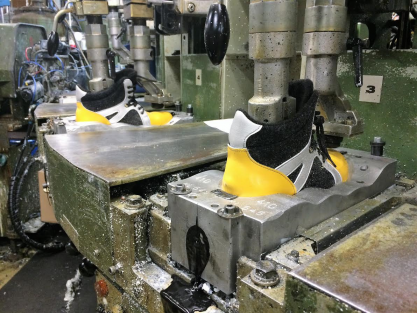 The skill of shoe making was passed down from cobblers to journeymen and apprentices. Honorary mining counsellor (vuorineuvos) Emil Aaltonen`s way to the top footwear industrial manufacturing business started as a cobbler`s journeyman in Hattula. In the beginning of 20th Century industrial shoe manufacturing developed strongly, and the city of Tampere became “The Shoe Capital of Finland”. However, handcrafted shoe business with skilled cobblers continued up till 1940`s alongside with industrial manufacturing. When industrial shoe making was blooming, Tampere vocational school trained operatives to factory floors. Also another shoe school in Kankaanpää trained operatives in 1970`s. The same shoe training gave competences also to practice cobbler`s profession. From the 1990`s till today Finnish shoe manufacturing business has decreased a lot. Injection moulded shoe technique invented in 1970`s was introduced also in Finland. It is now the most common shoe technique in Finnish shoe industry. It is mostly, used for a safety and service footwear. From the 1990`s until today the Finnish shoe industry has faced global challenges and mass production has decreased.

Young people have anyway founded small-scale businesses serving mainly private customers by making customized footwear. In the 2000’s environmental awareness has become a global trend, and it has generated fresh ways to think of shoes and their materials.

Footwear industrial manufacturing today is developing specially in safety footwear and service footwear sectors. They meet global quality requirements from the perspective of technology, materials and sustainability. Also this sector requires a highly skilled professionals. The education is dependent on the support of the safety footwear factories and cooperation with research units of universities.

Fashion business has met global changes which is why fashion shoes are not manufactured widely in Finland. Fashion manufacturing is partly handmade work and that is why it needs skilled operatives in factory floors. Some Finnish shoe manufacturers have succeeded, though, to develop footwear for Nordic climate focusing on sustainability.

For future cobblers and design-artenomes are planning workshop concepts by which they can work together. Education has a key role to support young entrepreneurs to achieve maximum potential in handmade and eco-friendly shoe business.

Finnish magazine Kauppalehti underlined that Finland is the country of shoe wizards. New brands have been founded specially by designer-artenomes and they have succeeded also internationally.

In 1885, Fredrika Wetterhoff started to provide education in crafts and arts for women in Hämeenlinna. Today Wetterhoff’s heritage is a part of education of Tavastia Education Consortium and HAMK Häme University of Applied Sciences. Tavastia and HAMK educate shoemakers and shoe designers under the same roof in Hämeenlinna. Tavastia shoe making course qualifies you for repairing shoes or to start your own handmade shoe business. HAMK shoe design course qualifies you to design and develop shoe collection or to run your own shoe or bag business. Nowadays many graduates from HAMK footwear design have started their own footwear label based on handcraft shoe making. About eight cobblers graduate yearly from Tavastia and about ten from HAMK. About ten percent of them all start their own handmade shoe enterprise. The Satakunta Educational Consortium educates cobblers and orthopaedic cobblers in Kankaanpää. You also get a qualification of journeyman and master shoemaker. The cobbler has skill to repair shoes or make them. An orthopaedic cobbler makes shoes for special needs and works in a team of doctors, physiotherapists and foot-therapists. About 20 cobblers graduate every year.

The future of the tradition The survival of the handcrafted shoe making tradition relies on the continuation of shoe making and design education and the support of shoe making and design entrepreneurs. This improves the values and appreciation of handcrafts as a part of or our cultural heritage. The Satakunta Educational Consortium shoe making education has an important role to support the development of orthopaedic shoe field. Refreshing adventurous courses of “making-your-own-shoes” by Kenkäpaja Pihka, is warmly welcomed to Finnish handcraft field. Company offers everyone a possibility to make shoes by hand from quality materials.

HAMK: Smart and Sustainable Design, Bachelor of Culture and Arts.