The Port of Kotka and the multifaceted works carried out at the port belong to the history and identity of the City of Kotka, Finland. Modern methods have been utilised to replace the most physically demanding jobs carried out by stevedores, whilst, at the same time, many cultural values and traditions have been lost.

The manual stowing of cellulose bales is one of these almost forgotten traditions. In the old days, stevedores manipulated 200 kilogram cellulose bales with their bare hands and carried out “so-called ”stacking” through a loading hatch and from below the coaming under the deck above. These skills were replaced by machines during the mid-1970's. 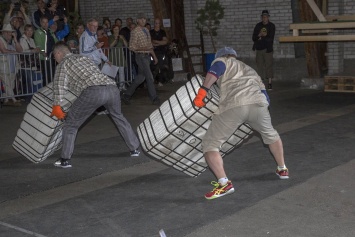 Those who have been concerned about the preservation of this tradition have now become active, with the desire to raise this cultural heritage to the attention of the public through, for example, work demonstrations and competitions. Nowadays, in Kotka, a small group of enthusiasts who are passionate about the manual handling of cellulose bales are striving to revitalize the tradition. The stowing of cellulose bales has been presented, for example, through demonstrations involving amateur actors from the Karhulan Työväennäyttämö theatre and the Viihdekuoro Stemmarit choir, high school students and firemen. In addition, the skills are also presented at stowage demonstrations and competitions, whilst the tradition is especially known to professionals who have worked in the cellulose bale field. 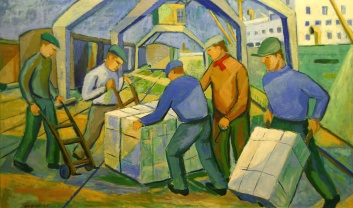 There are no such things as 200 kilogram cellulose bales anymore, and their manual handling by one person alone would not be possible from the point of view of occupational safety. In order to maintain the tradition, the same mass of cellulose bales have had to be created for demonstration purposes, so that the physical dimensions and weights of the bales correspond to that of the originals.

The handling of the classic cellulose bales can be divided into three sub-areas: carting, turning and stacking. Carting is performed by using box carts, whereupon the cellulose bale is turned onto the nose at the lower end of the box cart and the bars of the cart are then tilted towards the stevedore. Once the cellulose bale has been set in place on the box cart, it is time to move. The exercise is carried out in reciprocating directions, circling a marker and returning back to the starting point. The distance travelled totals about 35 meters. From there, the following stage involves the turning, whereupon the cellulose bale, in the upright position, is turned from corner to corner along a rubber mat for a distance of about 10 meters. Three meters before the end of the mat, the individual reaches the coaming of the supposed cargo hold of the vessel, the height of which is approximately 140 cm, under which the levels formed by the cellulose bales are to be laid.

The stevedore passes under this coaming in the bowed position, whilst, at the same time, holding the 200 kilo bale upright. After passing under the coaming, the worker will still have to turn the bale under the cover in the bowed position and then push the bale over to the horizontal position and then upwards to the upright position, leaving about ten cm between the bale below and the bale above it. The professional term for this stage is “stacking”. 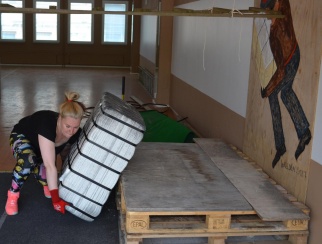 Cellulose and groundwood pulp bales had been handled in Kotka since the early 20th century. Kotka had several pulp mill factories, such as Kotka Cellulose Mill, Enso-Gutzeit and Sunila Oy, which had its own loading dock and a pulp bale warehouse designed by architect Alvar Aalto. Cellulose bales were stowed onto ships for global export since the 1920s. During the 1920s, Kotka was by far the largest export port for cellulose and groundwood pulp in Finland. The stevedoring of cellulose bales was carried out manually in cargo holds up until the mid-1970s. Cellulose bales arrived primarily at the port on railway wagons.

The cellulose bales were dropped one after the other from the doorways of the train wagons, next to which there was a receiver, from where they were box carted to the outside of the relevant export vessel. This practice was halted after the bales were damaged by the dropping process. In the 1940's, a massive wooden square-shaped pallet was developed, onto which the bales were dropped. In accordance with its developer Reino Karppinen, the wooden base was called a “Karppinen”. Reino worked at the prestigious Aukusti Järvinen´s gang. As a result of being subjected to the heavy drops of numerous cellulose bales, splinters from the Karppinen often penetrated the bales, something that was not accepted by buyers of the bales. The problem was solved by simply covering the Karppinen with a sheet of stainless steel. 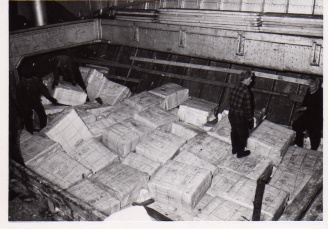 The Karppinen continued to be used until the railway wagons began to be unloaded using forklifts. The cellulose bales were generally lifted into the cargo hold of the ship in six or eight bale lifts, using the ship´s winches and booms. Old photographs show that the stevedores on the quay were generally men, but the lift makers were, at least during the early days, women. Of course, there were only men working in the cargo holds. The most physical working stage was when the bales had to be moved from below the coaming. In old ships, the load hatch covers were small and the coaming undersides were wide. In order to get a bale under the coaming, the stevedore had to twist and work in a very uncomfortable and difficult position, with bowed knees, so that their head did not hit the deck beams above their heads. Helmets had been left at the warfront.

When the bale had been brought to the outer side of the ship, the so called “stacking” was to be carried out, whereupon the bale was placed upright on a bale lying down. Only the most skilful and gritty workers were able to do this. Often, stevedores demanded a drop of hard liquor to perform this work step. After a couple of shots, they began what was regarded by many as "a dance with the bales". Tales have been told that a bale was finally given a kick to send it on its way, whereupon, the bale would, at least be almost in position. 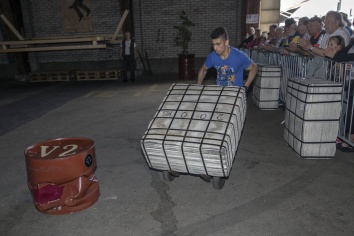 Since the manual handling of cellulose bales has been left back in history from the 1970s onwards, there has been a need to build display and practice facilities for bales that are similar to those conditions that were prevalent back then. Cellulose bales have been custom made at 200 kg and 100 kg weights, as well as so called fake bales that resemble cardboard boxes. With these bales, select loaders can practice for shows and competitions. From 2013 onwards, cellulose bales and the subject thereof has been handled in Kotka at exhibitions and competitions produced by sea-captain Carl-Gustav Walldén, in Maritime Centre Vellamo, Ravintola Cairo and Satamakuuri V2. In 2017, at Kotka Meripäivät and Tall Ships Races, sailboat crews took part in a "Cellulose bale triathlon" competition. The event was a success, and the bale team intends to continue as far as possible with the same concept and strive to convey the disappearing living heritage to the city's future generations.

The loading of cellulose bales is no longer professionally needed or even practiced today. The transfer of the tradition to future generations is dependent on only a few. It is challenging to find new bales, as a 200kg cellulose bale may even be frightening to some, and also dangerous to handle. It is essential to learn the right handling technique, as power alone is not enough to handle a bale.

In the background, there is, however, an eager group of enthusiasts and the objective is to organise at least one cellulose bale triathlon event every year, to be held in July. The people and props have been gathered to be able to organize the events- now it’s about informing the matter and attracting more spectators and participants.