Summer theatre performances are staged by both amateurs and professionals. Many amateurs have years of experience in the art. New people are recruited for the productions each year to replace ageing actors and crew. There are efforts to make young people in particular actively involved in the summer theatre tradition. Involvement in summer theatre activities is often a hobby for the whole family. Not everyone needs to act since there are plenty of other things to do, ranging from grilling sausages for sale to directing traffic, building sets and writing scripts. The audiences of summer theatres are made up of a varied group of local residents, summer cottage owners and other theatre-lovers. Over a million people go to see summer theatre performances each year. 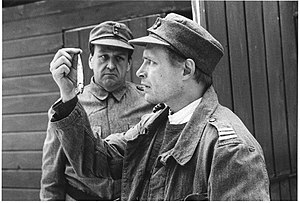 Amateur summer theatre activities are typically organised by village societies, youth associations and acting groups from adult education centres. A summer theatre can be run by a village community with local resources, or the arrangements can be large enough to establish their significance on a regional or even national scale. 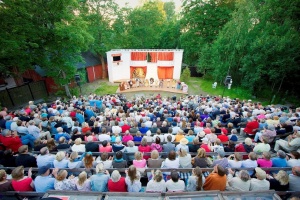 Summer theatre productions are put together by both Finns and Finnish residents on a national level. The locations are often regionally situated based on where those involved reside. That said, particularly nowadays, professional actors and staff hired for professionally oriented productions may move long distances across the country for work. The most common role to hire is that of professional director. The repertoire of summer theatres has traditionally consisted of rural comedy and classic plays. These days, however, other pieces are selected more and more frequently. There are some 400 summer theatres in Finland.

The number of Swedish-language summer theatres varies at around 20 each year. The majority of them are amateur theatres, which draw about 50,000 people to their performances annually. One of the summer theatres is Teaterbåten, which tours from harbour to harbour to perform.

The things people tend to appreciate about summer theatre are that it is familiar, comfortable and inherently Finnish, while typically being strongly rooted in nostalgia. For many theatres, music is the main draw. Summer theatres can rebel against normalised views of people and humanity as a whole, and the modern notion of efficiency above all. Summer theatres also serve as family-oriented theatres that cross generational boundaries. It is common to find the lasting heroes and heroines of children’s books and classic fairy tales on summer theatre stages.

In rural areas, summer theatre productions are arranged in a variety of locations, ranging from club houses to old residential yard areas and school yards to the gardens of manor houses and lakeside environments. In cities, performances are held in parks and ruined fortresses, for example.

In the early 19th century, outdoor performances were arranged by travelling theatre troupes and circus performers. Summer theatre stems from the same tradition as Finnish theatre in general, which is strongly linked to the notion of the common people coming together to engage in civic activities involving a variety of movements, public education societies, sobriety movements, youth clubs, volunteer fire brigades and workers’ organisations. For many associations, stage performances were an excellent way to earn money, but the hobby itself provided a means for self-development. The productions combined volunteer work, pleasure and benefit, efforts for the common good and the joy of performing for a crowd.

The political differences of the amateur performers divided the groups in the beginning. Workers’ theatres and youth clubs have organised theatre productions for two centuries. After the Finnish Civil War in 1918, the activities of workers’ theatres were either restricted or banned. They resumed their operations in the 1950s, however. One of the most important starting points for the activities of youth associations has been diverse public education in accordance with the ideology of enlightening and educating the population. For quite some time, educational information was presented to the public in the context of theatre and by theatrical means.

TINFO - Theatre Info Finland:Future and past premieres in Finland