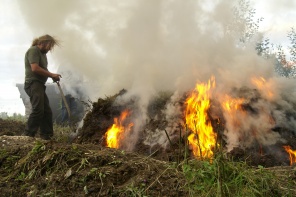 The history of tar making dates back thousands of years, and a technique adjusted to suit the conditions in Finland – tar burning in a pit, i.e. dry distillation of wood – has a well-documented and thoroughly studied history that is centuries long. The art of tar burning has been maintained for both practical (home use) and commercial reasons, even though in many areas the continuum of this tradition was broken for multiple decades. Today, tar burning know-how is cherished by private persons and families, associations, village clubs and businesses, among others. Parishes are among those that require the largest amount of tar, because even today the shingle roofs of many churches and bell towers need pine tar to protect them from the elements. These days, tar pits are also burned for demonstration purposes by people practising the tradition as a hobby.

The folk technique of burning tar, in which the wood to be distilled is placed in a wide, funnel-shaped pit, has remained nearly unchanged since the early 17th century. Originally, the materials used included tree stumps, roots and windfalls, but gradually it became customary to use growing trees as raw material. The technique involves debarking pine trees up to several metres from the ground. The tree will remain alive, because a section of bark is left in place for the trees to be able to transfer nutrients from roots to treetops, and this will cause the trunk to begin secreting a large volume of resin. The debarking is done approximately four years before the tar burning.

The tar-burning pit is dug in a sheltered spot, and its bottom is compacted as tightly as possible. The pieces of distillation wood are laid into the pit so that they are pointing downwards at an angle towards the centre of the pit, where the channel for the runny tar to exit the pit is also located. Before setting light to the pit, it is covered with moist moss, peat and soil, with the aim of creating a combustion chamber containing as little oxygen as possible.

The pit is lit when the weather is dry, starting from the down-wind side and going around the entire pit from both sides. The pit will burn for a few days, depending on its size, and the task requires a special set of skills. The pit master is in charge of overseeing the lighting process and successful burning, adding and removing peat to maintain an even draft and, thus, keeping the burning process progressing consistently. In approximately 24 hours, tar will begin to run out of the pit, initially as a watery mix. Due to the large size of the tar-burning pits and the vast amount of wood required (as much as 1,000 cubic metres), tar burning takes several people to complete, and pits were traditionally burned in collaboration between several households.

Nowadays, tar is produced with traditional methods, but the ‘fast’ barrel method is also used. Tar-burning barrels are well suited for producing smaller amounts for home use or demonstrating dry distillation. This method has been further developed, for example at Rajamäki’s Forestry School, with the aim of creating a simple, small-scale tar-burning setup alongside the more laborious tar-burning pits. Finns learnt about the tar furnaces that were being used abroad in the early 19th century, but their use and operation is a whole other chapter in the history of tar production, as new technologies never completely replaced tar-burning pits.

The origin of Finnish tar-burning skills has not been reliably confirmed. Researchers have discovered that the first pits were elongated in shape and referred to as ‘wind pits’ (tuulihauta), and that some time later these evolved into deeper ‘bundle pits’ (kimppuhauta). However, the wide funnel-shaped folk-style pit with a channel running out of it has been the most common type of tar-burning pits at least since the beginning of the modern age.

Finland is rich in forests, which is why tar was an important export product for centuries. The peak of tar business took place in 1863, when nearly 30 million litres of tar were exported from Finland. The exponential growth of the shipbuilding industry in Europe and the constant demand for tar provided the poor and underdeveloped country with a significant opportunity. It gave income to those who could not make a living through agriculture. 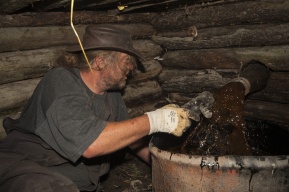 When looking at the history of the tar economy, it is easy to see that tar was burned almost around the entire country, apart from Lapland. However, the majority of tar burning took place in Ostrobothnia and Kainuu, the latter of which gradually became the dominant area during the 19th century as forests shrank and the Great Partition began first in Ostrobothnia.

With the methods acquired from abroad, tar production changed from pits to brick and iron furnaces in the 19th century, and later a few tar factories were even founded. However, the tar-burning pits remained the preferred method amongst peasants. Before finally dwindling down in the 1950s, tar burning experienced short peaks during the war and depression years thanks to the increased demand and new processed products.

The history of tar burning is part of Finland’s industrial history and played a significant role in strengthening the country’s economy. It has had a considerable impact on our landscapes and left traces to our cultural history and tar-region nomenclature.

The construction and burning of tar pits are connected with an abundance of folklore, tales and beliefs. Folklorists have recorded numerous stories of games, celebrations and gatherings held at tar pits. One of the beliefs was that you could not call tar by its real name while the tar-burning process was still in ongoing. It could only be referred to with other words, such as ‘stuff’. This was meant to secure a good batch, because the pit was revered and believed to be able to hear everything that was said around it.

Kustaa Vilkuna gathered information about customs formed in connection to tar burning. According to him, the burners were kept awake by inviting young people to dance by the pit. In the Swedish-speaking Länsi-Pohja, mock ‘weddings’ were held when the wood stacking phase was complete.

Celebrations including playing and dancing around the pits were also held in Central Ostrobothnia when the pits were being dismantled. Furthermore, Samuli Paulaharju noted that ample food and drinks were always served during tar burning.

A specific vocabulary with regional characteristics developed around tar burning, describing the equipment used to construct tar-burning pits, and the pit master, among other things. Professor Oiva Turpeinen says that the word lotnikka, meaning the pit master, comes from the Russian word plotnik, which indicates the shared tar-burning history between Finland and Russia. 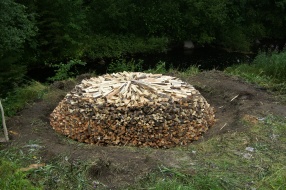 Tar is also referred to in many Finnish sayings, such as ‘whatever you do, do it with tar’, ‘what cannot be cured with sauna, spirits and tar, will kill you’ and ‘work is like drinking tar’.

The model in which a master teaches a journeyman functioned as a way to pass on the skill of burning tar from one generation of experts to the next. For example, in Kalliokoski, located in Halsua in Central Ostrobothnia, tar burning has continued uninterrupted for centuries and the skills have been passed on from one master to another. The chain of masters in Halsua can be traced all the way to the 19th century, and the pipe for running the tar out of the pits has also been passed on as a legacy of old masters. In Halsua, tar burning was often done with the help of volunteers, meaning that in addition to the master, the entire community took part in transmitting the tradition. Tar burning with all its phases is a skill that can be learnt over time and with instruction.

Tar burning is demanding work as constructing the pits, managing the fire and running a successful burning process take great skill. Temperature control of the pits was based on experience and the pit masters’ tacit knowledge of the correct temperature. One of the elements that the masters would monitor was the amount and colour of the smoke.

The continuation of commercial tar production is again a hot topic due to the EU’s new chemicals regulation. The regulation threatens to put a stop to the operations of producers manufacturing batches exceeding 1,000 litres, unless tar can be registered within the deadline.

Tar burning is likely to continue as show demonstrations and as part of the activities of associations for as long as there are people who have the required know-how. Burning tar in pits is a demanding skill that requires a community effort, and its future now rests in the hands of the modern-day experts.