The Orthodox and Karelian tradition of virpominen 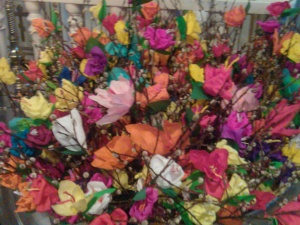 In Orthodox congregations, the preparations for Palm Sunday include the decoration of a large amount of willow branches that are consecrated in the church before they are used in the morning of Palm Sunday, when children visit homes to wish good fortune on their neighbours by blessing the families with the willow branches. The congregations work together with schools and the clergy of the Joensuu Orthodox Congregation, for example, visits the City’s schools. During these events, the branches are consecrated and the significance of the tradition is explained to the school pupils. The children and young people are encouraged to take the willow branches to their elderly loved ones and godparents, in particular.

People from Orthodox and/or Karelian backgrounds also prepare the willow branches for virpominen at home, well in advance of Palm Sunday. 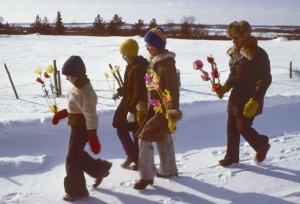 The virpominen tradition includes oral culture (jingles, nonsense poems), an aesthetic aspect (decorated willow branches), humanity (wishing well and health on others, meeting with each other), communal aspect (the tradition can only take place within a community and it strengthens the communal spirit) as well as special regional characteristics (the impact of the Orthodox faith). Virpominen is a tradition of both traditional communities and newer communities.

The local associations of the Eastern Finland Kalevala Women’s Association uphold the virpominen tradition in many ways; they have published collections of the rich virpominen jingle tradition as well as a book about the tradition, the willow branches are decorated during their communal decoration bees, and they have connected the act of virpominen to different forms of volunteer work, such as greeting the elderly in nursing homes and assisted living buildings.

Karelian associations organise national and regional virpominen events. Additionally, ‘Virvonta of the year’ events where a person with a high social status is selected to be publicly blessed with the willow branches have become quite popular. Often, these people have worked to promote Karelian traditions, in particular. They are touched with the decorated willow branches, often by children, and the programme often contains information about the virpominen tradition. Karelian societies also prepare the decorated willow branches for virvonta and they are sought-after items in communal rummage sales. The societies and the national Finnish Karelian League also hold lectures and offer other educational services about virvonta. Educational institutes of non-formal education work, such as Sivis Study Centre, hold annual events about the topic. These events bring together people from Karelian backgrounds as well as others interested in the topic and they are usually carried out in ecumenical spirit.

At homes and in the decoration bees organised by various communities, the willow branches used for virvonta are decorated, usually with flowers made from crepe paper or silk paper. Feathers are not a part of a traditional, Orthodox virvonta branch. There are religious connotations related to the paper flowers; for example, a willow branch with three branches refers to the Holy Trinity and a red rose to Virgin Mary. However, these connotations are often forgotten and the purpose is to prepare beautiful and even impressive flowers that delight the people receiving them. Traditionally, virvonta takes place early in the morning. People and families from Karelian backgrounds at least have heard from their grandparents, for example, that if the visitors come too late, they may have to go to ‘trubah’, the chimney. People are asked to place the branches in a place of honour at their home, such as behind an icon, and the consecrated willow branches should be disposed of by burning them, they should not be thrown away with the rubbish. The decorated branches are exhibited until Ascension Day. Dressing up in a disguise or costume is not a part of the Orthodox tradition. Instead, children are asked to wear neat Sunday best clothes.

Evangelical Lutheran congregations also connect the traditional, popular virvonta tradition to the Palm Sunday. In work with children and young people, this becomes visible in many ways (the decorated willow branches and teaching related to Palm Sunday). 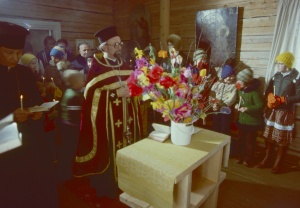 In our Finnish culture, the virvonta tradition is most closely related to our eastern cultural heritage and the traditions and customs of the Orthodox church. Today, virvonta has partly cut ties with its religious roots, but even now, it is all about wishing all kinds of good things on your loved ones. According to the religious frame of reference, the virvonta tradition continues the custom from the first centuries of the Christian church, where Jesus’ last visit to Jerusalem is remembered by greeting others with palm leaf wreaths (Palm Sunday). In the history of the Western church, this event has been celebrated with impressive palm leaf processions. Within the scope of influence of the Eastern Orthodox church, especially among the Karelian people, the tradition changed forms into virvonta; the first spring branches, willow branches, are used to greet and bless loved ones and friends early in the morning of Palm Sunday. 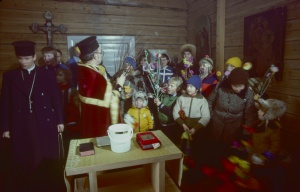 Similar traditions to Karelian virvonta are also practised among the Setos, Izhorians and Vepsians. An essential part of the Orthodox and Karelian virvonta culture has always been that the act is carried out with branches that have been consecrated during the service on Palm Sunday Eve. The decorating of the willow branches became more common as the materials became more widely available (newspapers, sweet wrappers, crepe paper, tissue paper).

Outside the Karelian areas, an outwardly similar virvonta tradition has also been practiced in the Karelian isthmus areas that are now under Russian rule and in South Karelia in Finland. The custom has also been significant to the Lutherans in the areas and many virvonta jingles and poems have been recorded from the areas. In these areas, there are indicators that the virvonta tradition was also a chance for the poor to have something to eat during the Holidays (virvonta reward).

Decorating of virvonta branches and using them to greet loved ones was a documented custom around Finland already before the Karelian immigrants came in the 1940s. According to folklore researcher Kustaa Vilkuna, this is most probably related to the growth of the folk school institution, i.e. the teachers have included the decorating of the willow branches in their teachings. The teachings did not always include the religious aspects.

The root of the verb ‘virpoa’ is believed to be ‘verba’, the word for willow in ancient Russian. In the 1980s, the eastern and western traditions seemed to start merging, and, as a result of the western Easter witch tradition and the eastern virvonta tradition, small ‘witches’ with willow branches were seen in different parts of Finland around Palm Sunday, i.e. small children dressed as witches or other creatures visited from house to house. This tradition has become a part of children’s culture, which is possibly reinforced by the imagery of the confectionery industry around Easter. In the old Orthodox tradition, the visitors got their reward a week later, on Easter, but in the modern day virpominen tradition they can also be ‘rewarded on the spot’.

As an action, virvonta offers many applications for voluntary work and the operations of various communities and organisations, and it could also liven up work communities. The North Karelia and Joensuu regions have an image as regions that respect their own history and traditions and value humanity and communality, and, as such, the virvonta culture offers them a natural opportunity and a way to connect to the region’s history.

The Ortodoksisten Nuorten Liitto ry youth association has instructed and encouraged children and young people in the virvonta tradition for decades through its educational and club activities. The organisation’s significance in preserving and promoting the visibility of the tradition was high especially after the wars, when knowledge and the identity of Orthodox culture were not as strong. The association has also published books and learning materials on the topic. 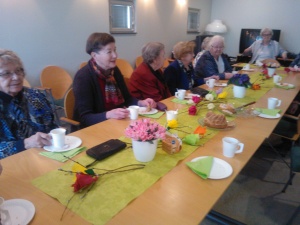 The aspects related to the eastern virvonta tradition – going outside, meeting others and wishing them well – contain a custom and an opportunity for promoting and preserving a feeling of communality, which are factors that are important especially to modern people. Increasingly, this tradition can be applied to increase the sense of community in our living communities and village or urban communities. Maintaining this tradition is especially well suited to Eastern Finland. In the easternmost border areas of North Karelia, such as Hattuvaara in Ilomantsi, this chain of tradition, dating back hundreds of years, is still alive today.

Due to the changes taking place, interesting, although sometimes challenging, discussions about combining the eastern and western traditions have arisen, as well as debate on who is allowed to take part in the act of virvonta. Virvonta while wearing costumes has become a separate form of children’s culture. The most essential part is that there is information available of the roots and significance of the tradition. The tradition offers an excellent cause and opportunity for people to go outside, greet their relatives and maybe even more distant acquaintances, such as neighbours with whom they would like to have more contact. The vital part of the virvonta tradition is the principle of taking others into account and meeting each other face-to-face.

As North Karelian people we could make it a matter of honour to ensure that any visitors, tourists and family guests arriving in the area in spring, around Palm Sunday, would be greeted with this beautiful Karelian custom. Anyone, regardless of their ethnicity, religion or other cultural background, is welcome to join in the tradition, as long as they keep in mind the central aspect: wishing others good things, health and blessings.

Unesco: Living heritage experience and the COVID-19 pandemic. The tradition of "virpominen".