The forest relationship in Finland

All Finns have some kind of connection to the forest. It is, in some way, based on their life story, family background, living environment, work, recreation and/or shared cultural views of being a Finn. The view of the significance of forests and their connection to being a Finn has been built and will continue to be built through culture, upbringing and education. Forests are also linked to Finland and Finns abroad. 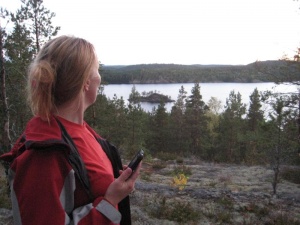 Relationships with forests may be developed from many different perspectives, and it may be a part of a profession, everyday life, lifestyle and interests. The Finnish forest relationship often becomes a part of that person’s identity. In order to exist, a relationship with the forest does not require constant contact with wooded areas: it may manifest as opinions, attitudes, values and views.

Many communities or groups share and maintain certain forest relationships. These include, for example, forestry professionals, nature entrepreneurs, environmental educators, campers, scouts, berry pickers, hunters and summer cabin owners. The forest relationship may be related to the forest as an environment, as a resource or as a source of inspiration, experiences and knowledge.

Forest relationship is important, because over 70 % of the entire Finland’s surface area is covered by forest. Half of all Finns live a maximum of 200 metres away from the closest forest and more than two-thirds of all Finnish people go to a forest or nature every week for a variety of different purposes. Over half of all Finnish forests are privately owned and every fifth person over 20 in Finland is a forest owner. 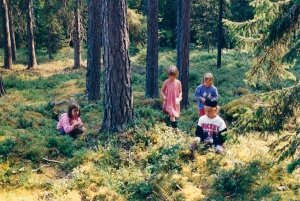 The forest sector directly employs 70,000 Finns, and the forest cluster , which includes other industries besides forestry, such as paper and forest machine production and design, consultation and specialist work, employs a further 150,000 people.

The significance of forest culture in Finland is based on the most important natural environment with which Finns have always interacted – the forest. Forest culture refers to the operational methods, practices, views, meanings and values of individuals and communities related to the forest, which are shared through social connections. Forest culture is born in interaction between people and the forest, and it occurs as multifaceted values related to the forest and various ways of utilising it, which are related to livelihoods, hobbies and ways of life. The Finnish forest relationship is not one-dimensional – it has always included various perspectives.

The forest sector is one of the cornerstones of the Finnish economy: it is the only production industry in Finland that can compete in global terms. The forest sector is also the most important part of the Finnish bio-economy, which refers to the use of renewable forms of energy and their refinement into products. The most notable renewable, industrially-processed natural resource in Finland is wood. The forest sector has undergone large changes due to the recent social and global upheavals, and has managed to maintain its significance. Forests are also utilised in a diverse way in other livelihoods, such as tourism and natural product businesses. Utilising forests in various livelihoods requires a large amount of expertise, know-how and other elements of professional culture that have long communal traditions in the forest sector, but that constantly reform, evolve and grow.

Forest protection brings up many varied and sometimes also contradictory values. In nature protection, the intrinsic value of forests and forest nature is emphasised, but ecologically sustainable and socially fair use and the protection of forests is also important.

Forests are also a recreational environment, the diverse use of which is enabled by everyman's rights. The recreational use of forests has increased, both due to increased leisure time and the highlighted well-being effects of forests. Various interests that take people closer to forest nature are popular. Forest nature is seen as a source of aesthetic, refreshing and calming experiences. Several work and crafting methods are related to the use of forests and wood, some of which are still important to work (such as chopping wood, forestry) and some that are maintained as traditional skills (timber rafting traditions, birch bark crafts). Roaming in forests also requires many skills.

Forests are an essential part of our national culture. Finnish art, design and architecture often receive their inspiration and materials from forests. Well-known Finnish design companies and brands utilise the forest in their products, based on old and new principles. 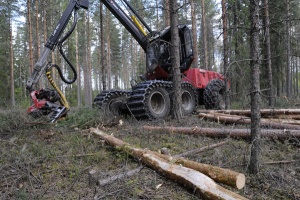 Finland is known as a forest industry country, where the forest provides both livelihood and raw materials. Timber, tar burning, slash-and-burn cultivation and forest food ingredients have sustained life in Finland for centuries. Finland has been known as a land of forest industry since the 19th century. The increase in the standard of living that started towards the end of the 19th century was largely based on the forest industry, and as late as in the 1950s nearly half of the working people received their livelihood from agriculture and forestry; in total, 70 % of Finns belonged to the agriculture and forestry population. The forest industry employed hundreds of thousands of Finns. Since entering the 21st century, the use of forests has become more diverse, but the forest industry, as part of the bio-economy, still plays a central role in Finland.

The forest has always been a communally shared mental landscape, a privately experienced personal place and a recreational environment. As early as in the 19th century, the national landscape of Finland started to become crystal-clear: a view of forests and lakes seen from above. These images of Finnish landscapes have been one of the most powerful factors in determining what being Finnish means. To this day, when people are talking about being Finnish, they almost always bring up nature, and forests in particular. Our everyday language and names are full of phrases and proverbs related to the forest. The forest has held a central place in Finnish folklore and it is still, in many ways, the mental home of the Finns, with both psychological and even spiritual dimensions.

The Finnish forest relationship starts to grow and develop in childhood. For many Finnish children and young people, the forest is still a place with significance and importance for the development of their identity. Memories of a forest nearby the childhood home and of playing there have often been fundamental throughout people’s whole lives. Families and upbringing have played a large role in passing on the traditions of roaming in forests and utilising them, and in keeping these traditions alive. Forests play an important role in the everyday work of many day care centres, both as a local environment and through special, nature-based pedagogical activities. The focus of nature, the environment and forests can also be seen in the operations of many schools, and forest nature and the use of forests as a Finnish phenomenon are strongly evident in various subjects. The forest sector is the source of several professions that maintain their own professional culture and pass on professional traditions related to forests.

Many recreational activities related to forests are also typically Finnish. Some of them have a long history, such as summer cabins and scouting, roaming, nature, sports, hunting, and mushroom and berry picking, while some are newer, like geocaching, airsoft or trail running. The Finnish Defence Forces also teach off-road and wilderness skills. Because private ownership of forests and family forestry are typical in Finland, many forest use skills are learnt in private forestry in childhood.

Forests are also brought up in societal discussions. Finns are worried about bushy landscapes, the future of the forest industry, the forest industry’s impacts on nature, disappearing primeval and urban forests, and alienation from nature on the one hand and from the utilisation of forests on the other. The forest relationship is passed on as part of Finnish culture, to which it is connected in many ways.

The Finnish forest relationship is strong and varied, but also faces many threats. Urbanisation and new recreational alternatives cause people to become more distant from nature. Roaming in the nature requires skills, which are in the danger of becoming rarer. Now, forest owners do not necessarily live anywhere near their forest, and forestry work is often outsourced to professionals. Globalisation changes the forest sector and influences the conditions of practising forestry in Finland. The value conflicts set opposing forest relationships against each other and make the differing forest utilisation methods more difficult.

It is important that the creation of a diverse, pluralistic forest relationship is enabled in childhood and that it is supported from the start. The forest has such a central meaning in Finland that an active relationship with the forest helps build a good life. It has been proven that forests provide us with special mental, physical and financial well-being.

Spending time in the forest has been indeed found to increase the restorative; immunity, vitality, creativity boosting aspects of our health and wellbeing. These same health affects have given rise to a number of Forest Based Health Practices (FOBHP), one of which is the Finland born Forest Mind (Metsämieli) method that combines mindfulness, positive psychology and coaching in a forest environment. Forest bathing, the practice of quietly and calmly enjoying the forest environment with one´s 5 senses, either alone or in a group, is also gaining popularity in the world. Finns have a possibility to benefit from this practice of mindfully connecting with the forest, as it offers a new way of spending time in the forest, adding to the current rather active manners of enjoying the forest environment. This can open the doors for new forest visitors.

Other agents that support the Finnish forest relationship:

Ministry of Agriculture and Forestry, Forest resources in Finland.