Practitioners and experts in the tradition Bringing candles to cemeteries on Christmas Eve is a wide-spread tradition in Finland practised by families, from children and grandparents. This tradition is practised of a person’s free will and people are not separately told or encouraged to do it. On Christmas Eve, people whose relatives have passed away or people who are looking for peace and silence visit the cemetery. The Church as an organisation is linked to this tradition in as much as these events are held in cemeteries and in churches during Christmas. Guards of honour, members of the Finnish Defence Forces, stand at war graves.

It is traditional to buy grave candles, lanterns and wreaths or other decorations made of evergreens before Christmas Eve. Some also bring flowers to the cemetery, such as heather. In the afternoon twilight of Christmas Eve, families dress up warmly, take their candles and decorations with them and go to the cemetery. Often, when arriving there, the group is in a prayerful state of mind, and together they walk to the graves of their loved ones. They often visit the graves in an established order or by the best route. Decorations and candles are placed by each grave, after which the family members take a quiet moment to think about the person who has passed away, either silently or by saying a few words aloud, whichever they prefer. Some people also visit the war graves to pay their respects to the people lost in wars. If a family’s loved one has been buried somewhere else, they can also take a candle to a memorial for people buried in other places. Many families try to visit the cemetery later in the day, often before the Christmas dinner. This may be because of the different atmosphere in cemeteries after dark. It is easy to see how wide-spread this tradition is every Christmas Eve; for example, the entire cemetery of Hietaniemi in Helsinki is lit up by a sea of candles. 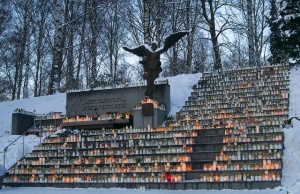 In Finland, the deceased are primarily remembered at Christmas. Visiting graves and lighting grave candles is an old, pagan tradition. As kekri, the Finnish harvest festival, started to lose its significance, its traditions of placating and feasting to honour the dead moved to Christmas. When Christianity came to Finland, the so-called services for the departed became a part of Finnish Christmas traditions, unlike other countries, who remember their dead on All Saints' Day.

In Lutheran cemeteries, the first candles appeared in early 1920s; the earliest documented occurrence of the tradition is from Helsinki’s Old Cemetery from 1921. On Christmas Eve, secondary school graduate Lyyli Grotenfelt, daughter of Professor Kustavi Grotenfelt, lit a candle on the grave of her late sister Kyllikki, who had died earlier that year, on 20 September. The habit started to spread little by little, and after the wars lighting candles on graves rapidly became more common. Today, thousands of candles illuminate Finnish cemeteries on the night of Christmas Eve, especially the War Graves. The tradition was probably adopted from the Germanic Moravian Church.

The habit spread after the wars, first at war graves but soon after also on other graves. Maybe this is a remnant of the old worship of ancestors, as the Finns are faithful practitioners of this tradition today. In other Nordic countries, this tradition has apparently not spread as widely. In Sweden in the 1890s, there were occurrences in the larger cities where people set up small fir trees with candles on graves during Christmas. According to some estimates, the tradition may originate from the Germanic Moravian Church. In Roman Catholic countries, candles on graves are mostly lit on All Saint’s Day. In Finland, Christmas Eve is a more popular time for grave candles than All Saint’s Day. The tradition has changed due to factors such as improved traffic connections. In the era before cars, people used to ride to cemeteries in horse-drawn carriages, especially in rural areas. Also, before, normal candles were used as grave candles, but nowadays the candles as specifically made for the purpose: they burn for significantly longer and have a plastic cover that helps the candle stay aflame. 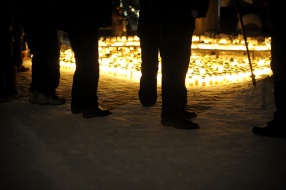 Bibliography and links to information