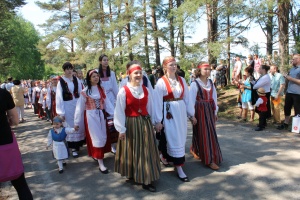 The key operator of Whitsuntide tradition is Ritvala village and its residents. Ritvala Youth Association has been responsible for maintaining the tradition since the 1920s. The association organises the arrangements, and the event is mostly set up through communal work. Everyone interested in the arrangements can participate; being a member of the association or living in Ritvala are not conditions for participation. The event is consciously kept small-scale and as uncommercial as possible. Many different parties assist the Ritvala Youth Association in setting up the festival; at the moment, Rauhala comprehensive school, lower stage, and Valkeakoski Music School, in particular, are among the active operators.

Many people take part in arranging the event and participate in the festival, regardless of their age and gender. Men and women, children, young people, adults and the elderly all take part. Due to the nature of the tradition, the older participants are well-respected, as maintaining the tradition is heavily based on folk memory, despite of all the existing, written information. Furthermore, the numerous people around Finland with roots in Sääksmäki and Ritvala or those who find it important to maintain the vitality of Finnish culture help support the tradition.

The Ritvala Whitsunday festivities take place every Whitsunday in Ritvala village in Sääksmäki, nowadays part of the town of Valkeakoski. In the calendar, Whitsunday moves together with Easter between early May and early June. The key element of this tradition is a procession of maidens, who sing Kalevala metre Whitsuntide poetry "helkavirsi" while walking a cross-shaped route on the village roads. The procession begins from the middle of the village, from Raittinristi, and ends on Seurantalonmäki hill in a big ring. Here, the event continues as an outdoor festival. If the weather is poor, the festivities continue inside the meetinghouse Seurantalo. The festival features performances by the villagers and local residents as well as shows by visiting artists. The performances include folk dance, folk singing and a speech for the special occasion that is always a pleasure to hear. The Whitsunday festivities are also a celebration of national costumes, as they are worn both by many performers and audience members. In the 1920s, national costumes also became the standard costumes for the procession.

For the people maintaining this tradition, the Ritvala Whitsunday festivities are more than just an event that lasts a few hours of one day. Continuous discussions about the significance of the festival, the fine adjustments to its arrangements and the contents of the programme as well as practising the performances and carrying out the practical work, ranging from a cleaning bee of the meetinghouse to baking and ticket sales, are all part of the Whitsunday festival tradition. Ritvala’s villagers have a strong routine of organising the festival and they also have plenty of information about good practices and what needs to be done and in what order, thanks to their long experience.

The Whitsunday festivities in Ritvala village are the oldest festival of popular tradition in Finland. The multilayer nature of the event’s history and the openness of interpretations give a unique flavour to the Ritvala Whitsunday festival tradition. Researchers have variously dated the tradition back to prehistoric times, the Christian Catholic Church era or 17th century Ingria. Festival visitors can feel like they are a part of a fertility blessing, an echo of a Catholic procession tradition, a celebration of the roots of Finnish language culture or, more simply, the spring festival of their home region. In short, the festival and the tradition attract an exceptionally high number of interest groups: from researchers of various fields to national costume enthusiasts and from people interested in poems in Kalevala metre to folklore and regional work activists. The Ritvala Youth Association is consciously keeping the interpretation of this tradition as open as possible. This enables everyone to have a Whitsunday festival that suits them best, find their own significance and apply their personal interpretation.

The first people to write down the Ritvala tradition and Whitsuntide poetry were Kaarle Akseli Gottlund in 1824 and Elias Lönnrot in 1831. Alkuvirsi, the first song of the song programme, three ballads (Ballads of Inkeri, Mataleena and Annikainen) as well as the songs Tuomen synty and Lopputoivotus, the final song, were recovered. Lönnrot also wrote down a proverb from Sääksmäki, which reveals the significance of this tradition: ‘Jo sitten maailmakin loppuu kun Ridvalan helka ja Huittulan vainio’, which could be loosely translated to ‘When Ritvala Whitsunday festival ends and Huittula fields no longer grow, the world is about to end’. The Ritvala villagers believed that the fields will no longer grow, if this old tradition is forgotten. The faith in this tradition continued for an exceptionally long time in Ritvala, but it started to gradually diminish until the song tradition finally ended in the 1880s.

In its current form, the festival combines the old, traditional Whitsuntide poetry procession with a new kind of regional outdoor festivities, and it dates back to 1904. After the interlude of a few decades, the resurrection of the Whitsunday festival tradition depicted the birth of Finnish civil society in a nutshell: a village, a school and free civil actions. In 1903, a folk school was established in Ritvala. The school’s first teacher, Armiida Manner, established a girls’ choir, and the girls expressed a desire to also sing Whitsuntide poetry. The songs were first performed at the annual celebration of the village’s only association, the volunteer fire department, on a Whitsunday. This inspired people to continue singing Whitsuntide poetry and the celebrations were continued the following years, on Whitsundays.

The knowhow concerning the arrangements of the event is passed on as oral tradition and collaboration. The people preserving the tradition remember how the festivities were previously arranged and how they should be arranged; each festival is a result of a discussion and a starting point for the next celebration. The tradition's previous stages, events and occurrences are actively remembered when organising the event and during the year. The festival preparations bring together people of all ages through communal work, and they learn how to work together even as children. The festival itself is a place for meeting relatives, old friends and villagers even after many decades.

The tradition is passed on through actions that involve as many children and young people as possible and offer them the chance to participate and perform. Encouraging others and trusting in your own voice is central part of the tradition. After all, the song procession is always started with the words of the first song: ‘Ruvetkasme, rohjetkasme, älkäs me ääntämme hävetkö’ (Let us start, let us begin, let us not be ashamed of our voice). The Ritvala Whitsunday festival tradition is also passed on through high-quality, factual information. The organisers of the Whitsunday festival are proud of their research tradition, which will soon be two centuries old.

The future of Ritvala Whitsunday festival looks bright. The age-old, multi-layered nature of the Whitsuntide poetry festival tradition and the openness of interpretations ensure that its history interests and fascinates many people. The unique tradition is valued and many people are committed to upholding it. Organising the festival creates a sense of community, reinforces local identity and creates a positive feeling of togetherness. It has also been proven that determination and working together can bear plentiful fruit. The Ritvala villagers themselves are deeply committed to their tradition; how could they end something that was established at the beginning of the world?