The winter seine fishing tradition is practised by professional fishermen. Puruvesi (416 km2) is a part of the fourth largest lake in Europe, Saimaa, and it is located in the towns of Savonlinna (prev. Kerimäki and Punkaharju) and Kitee (prev. Kesälahti). The operations are arranged through ‘nuottakuntas’, seining communes and also as a larger community of the fishermen in Puruvesi region. Seine fishing in the winter entails a wide oral tradition of hundreds of fishing grounds and traditions that are essential for the practice of the traditional profession. 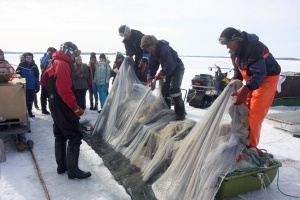 Seine fishing in Puruvesi. All photos in the article: OSK Lumimuutos, 2017

Today, about 30 seining communes practise seine fishing at Lake Puruvesi. Puruvesi vendace is famous for its light silvery colour and its soft bones. These are the results of the special characteristics of Puruvesi: the clear waters and the primary production caused by the transparency of the water. The primary production takes place both in the surface waters and deep in the bottom waters with an extensive surface area. When it is light, vendace feed on the animal plankton near the bottom and as the amount of light decreases, the fish move up and feed on the organisms on the surface and in the middle water areas. This versatile nutrition of Puruvesi vendace probably affects the tenderness of the fish and its short-term rigor mortis. These characteristics have sometimes made it harder to market the fish, especially when they have been small in size. 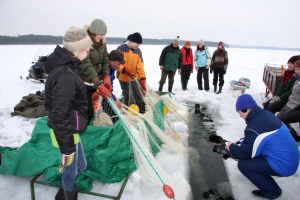 Seine fishing in Lake Puruvesi is based on the exceptionally clear water in the lake. The vendace flock together into large shoals which follow even the sparse nets of the seine without swimming through them. The hundreds of traditional fishing spots, discovered through centuries-old expertise, are still is use and the principle of seine fishing and the structure of the seine have mostly remained the same. In 2008, for example, 400 tonnes of vendace was drawn from Lake Puruvesi. Some years, over half of winter vendace catch in Finland has come from Lake Puruvesi.

Lake Puruvesi is the clearest of all large Finnish lakes, and people often refer to its ‘crystal waters’. Thanks to the transparency of the water, light can penetrate deep, up to 20 metres, whereas in other water bodies of Saimaa it reaches a depth of 10 metres on average. Lake Puruvesi is a pool of water with gravel and sand beaches, nearly isolated from the rest of Lake Saimaa, and there is a very small amount of brown humus from soil, which Finnish lakes typically have much more of. Winter seine fishing at Lake Puruvesi is possible from when it is frozen over to when the ice melts. Climate change has decreased the duration of the cultural seine fishing season. Today, the seining communes are mainly in charge of winter seine fishing.

Today, a characteristic cultural aspect of both winter and summer seine fishing is the concept of ‘apaja’, a plentiful spot for catching fish. Lake Purujärvi is a living map, divided into hundreds of these spots, which can only be learned through oral histories, practices and experience. The names of many of these spots can only be learned if someone tells you them, as they have no written names. Even the slightest mistake in finding these spots may damage the expensive seine nets and other equipment. If the exact location is not found, the edges of the seine may get caught on underwater rocks or the ice formations may tear it.

In conclusion, the current professional fishermen of Puruvesi maintain a significant, unbroken tradition through the utilisation of these plentiful fishing spots and seine fishing. It is hard to find something similar elsewhere in Finland. According to Professor Jukka Pennanen, these spots, such as the one named ‘winter grave’ can date back to pre-historic times. The names from historic times reflect the memories of the different historical layers of professional and communal fishing. Information transfer between the fishermen and situational awareness are still mainly passed on as word of mouth. The discussions take place at the fishing harbour before gong seining and, at the same time, the participants form a unique exchange mechanism of peer data about weather, fish, ice and water conditions, the catch and other topical matters. There are some snow and ice terms distinctive to the Puruvesi region, which reflect role of the rich local dialect and its forms. For example, during late autumn or early winter, ice is ‘kopeloida’, groped, in order to find out how thick it is. The local names of Puruvesi, such as Kotaniemi (goahti peninsula) and Poroniemi (reindeer peninsula) are examples of the Sami society that used to live in the area.

Frying vendace on the ice of Lake Puruvesi.

The first records of seine fishing at Lake Puruvesi date back to the 14th century. However, it is possible that seine fishing is an even older tradition, as is indicated by the Antrea fishing net, an artefact from the stone age discovered by Sakari Pälsi on the Karelian isthmus.

Puruvesi has been a well-known fishing area since the 14th century. According to tax information from 1543, the Swedish crown collected taxes from 15 large seines and as many as 404 small seines. It has also been stated that the castle masters of Olavinlinna sent seine communes to Lake Puruvesi to catch its tasty vendace. From the 14th to the 19th century, seine fishing at Lake Puruvesi was mostly a cultural or private practice, even though commercial fishing did have a role in, for example, the trade trips to Saint Petersburg and also in relation to crown monasteries and other commercial operators. Until the 19th century, it can be estimated that the seine fishing culture in Puruvesi was similar to communal fishing in the entire coniferous zone – the culture also included Kalevala rune singing, ‘Kalevalainen runolaulu’. Many rune songs, such as Tulen synty (the birth of fire) are related to seining, and Elias Lönnrot’s notes revealed that in Viena Karelia, rune singing played a central role in seine fishing in the olden days. In Puruvesi, the rune singing tradition came to an end in the 19th century.

Seine fishing in Puruvesi had an effect on the Kalevala, as rune signer Juhana Kainulainen, who lived in Hummovaara, practised hunting and fishing, including seine fishing. Thus, Lönnrot recorded intangible traditional knowledge related to seining and fishing from the Puruvesi region in his national epic published in 1828. The 20th century brought commercial fishing with it, although professional fishing in Puruvesi managed to maintain its communal role. Still, the names of the best fishing spots based on experience and local knowledge of the lake conditions are at the heart of seine fishing. Puruvesi’s notable ability to produce vendace has preserved sustainable winter seine fishing and, at the same time, maintained a special culture, despite some more meagre years in the 1980s and 1990s.

Until now, the tradition has been passed on as a part of fishing culture in Puruvesi from generation to generation. As the fishermen are aging, this tradition and culture is under threat. There have been attempts to continue this tradition. For example, fishermen have taken school pupil onto the ice to learn more and have worked together with researchers and other stakeholders. In addition to this, fishermen have applied for EU name protection for both vendace and seine fishing as a traditional, cultural fishing form. They received the name protection in December 2013.

According to research, seine fishing does not endanger fish stocks, instead it is thought that it keeps the vendace stock prolific. In order to raise awareness among consumers about the special characteristics of Puruvesi vendace and the waterbody itself, the cooperative of Puruvesi fishing harbour has applied for the EU’s protected geographical indication (PGI) status. The products receiving a PGI label must have a special characteristic or reputation that connects them to a certain geographical area and at least one production process must be performed in this area.

With regard to Puruvesi vendace, these special characteristics stem from the special conditions of the lake, its clear water and scarceness of nutrients, consequences of the coniferous forests and sandy soil of the surrounding forests, which filters rainwater efficiently. The fame of Puruvesi fishing has grown over the centuries, and the ‘one production process’ required for its label of protected geographical indication is, naturally, fishing. The Commission granted Puruvesi vendace a protected geographical indication (PGI) status on Finnish Independence Day (6 December) in 2013.

Between 2013 and 2022 the fishermen have promoted the practice and the PGI in a number of European Union and European forums, which have included for example SlowFISH, Low Impact Fishermen of Europe, CHERISH Interreg Cultural Heritage Project and the Festivals of Northern Fishing Traditions.

The dynamic of passing on this tradition has remained much the same, connected to the practices of winter seine fishing and word of mouth. It is also maintained every morning as silent practices through the fishermen’s meetings at fish harbours and in families. Additionally, local school pupils have actively been taken to see the work on ice in recent years, and experience-based information has been shared this way. 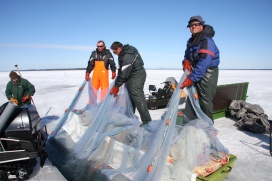 The seine fishermen are the people carrying on this tradition.

The famous winter seine fishing in Puruvesi and other seining culture are highly endangered. There are very few new fishermen. The group of existing fishermen is aging quickly. This leads to losing more and more mainly unwritten traditional knowledge.

In 2020 a new seining crew consisting of mostly young people below 35 years of age, and including women, was established (Snowchange Cooperative crew). This crew emerged as a young professional group committed to maintaining the traditions and knowledge of Puruvesi.

Winter seine fishing and other seining in Puruvesi have become more technical since the 1990s. Nevertheless, the cultural information about the best fishing spots, the special characteristics of the lake and nature as a part of the unbroken community and tradition of the fishermen is still at the heart of the tradition. Puruvesi vendace, Puruveden muikku in Finnish, is a famous product and name protected by the EU.

Puruvesi seine fishing culture was a significant innovation for fishing cultures all around Finland. The rune song materials of Hummovaara influenced our national epic, Kalevala. Modern aspects of the seinign are of secondary importance, given the fact that the continuance of seine fishing requires place-based in-depth knowledge of the lake and nature. This guarantees that the core of the traditional knowledge survives as long as there is ice.