‘Pesäpallo’ (or Finnish baseball) is a special part of Finnish culture. Thanks to its diverse nature, the national sport has maintained its place on school curricula, which means that almost all Finns have some experience in it. It is also easy to get involved in club activities because pesäpallo is suitable for all kinds of sports enthusiasts. Women and men can play in mixed teams at amateur level, which serves to increase cohesion within communities. Although there have been some efforts to expand it internationally, pesäpallo has largely remained a Finnish sport. However, many countries, such Australia, Japan, Sweden, Germany, Switzerland, Estonia and most recently the United States, India and Bangladesh have participated in the World Cup tournaments organised since 1992. Even the first ever World Cup in Asia took place in Pune, India 2019.

Pesäpallo is played as a high-level sport only in Finland. For some, pesäpallo is a passion and way of live or a regular pastime. Others play the game less frequently and enjoy it as a hobby. Some view it as nothing more than a distant memory from school years. That said, the national sport brings Finns together and holds an important position in Finnish society. All those interested can choose a level of competition to suit their skills. All Finns, each in their own way, are furthering the tradition of bat-and-ball sports.

Alongside playing the sport, many have found other roles connected to it. The pesäpallo community offers opportunities for success, self-development and accumulating generally useful knowledge and skills. Over the years, many people with a background in pesäpallo have risen to socially significant positions. You can get involved in the community as a manager, coach, umpire, carer, active club member, announcer, secretary, voluntary worker, audience member or some other role of your choosing.

In his book, doctor, politician and civic activist Ilkka Taipale highlighted 100 social innovations from Finland. The goal was to elevate pioneering sources of social well-being to the level of technological inventions. Pesäpallo was one of the first things to be included in the book as an important innovation resulting from lengthy development work.

Pesäpallo is one of the most popular sports played in Finnish schools. Thanks to its diversity, it is conducive to developing basic motor skills and hand-eye coordination. The basic actions involved in the game include throwing, running with quick turns at full speed, catching and batting. Clubs are organised for children to inspire them to get involved in pesäpallo. Many continue on to play for youth teams of actual pesäpallo clubs and attend popular regional and national camps. Throughout Finland, there are over 11,000 players under 18 who have obtained a player’s licence.

A full-length men’s pesäpallo field is 96 metres long. When advancing through all the bases and scoring a run, a player covers a distance of 131 metres. The length of the women’s field is 82 metres. Smaller fields are available for younger players.

Pesäpallo clubs and organisations are highly motivated to support children and young people in pursuing the sport as a hobby. The separate rules devised for the youngest players focus on getting the entire team actively involved. At the youngest level, playing matches requires a team of five to seven players.

Pesäpallo provides opportunities for a wide variety of involvement. Talented players can keep going all the way to the national top division, Superpesis, but many have found their place at lower levels or in amateur teams set up by companies, for example. Superpesis is the most popular women’s ball sport competition in Finland, and comes in third overall after ice hockey and football.

Bat-and-ball sports have long traditions in Europe. The Finnish ‘kuningaspallo’ (literally ‘king ball’) was the most advanced at the turn of the 19th and 20th centuries, but the Olympic athlete, coach, thinker and philosopher Lauri ‘Tahko’ Pihkala wanted more. In his mind, a more active and competitive sport was needed to be worthy of being dubbed the Finnish national sport. Pihkala worked on the idea and travelled all the way to the United States to draw inspiration from the local baseball culture and events.

The starting point was kuningaspallo, whose next iteration was ‘pitkäpallo’ (literally ‘long ball’). The focus was on running speed, perseverance and individual responsibility. Pihkala’s goal was to make the game faster. He arrived at a field arrangement with three field bases and a home base.

Once Pihkala’s development work was complete, a test match of modern pesäpallo was organised in Kaisaniemi, Helsinki, in November 1920. The first Finnish championship was won by Helsingin Pallonlyöjät in the 1922 season, which cemented pesäpallo as part of Finnish sport culture.

Pihkala also defined general social goals and purposes for pesäpallo. In the post-war period, nurturing national unity and maintaining defensive capabilities rose to the fore. Pihkala also emphasised the role of sports in the rearing and education of children and young people, and as a source of both mental and physical well-being. Sports-oriented recesses during school days provided energy and motivation for day-to-day school work. 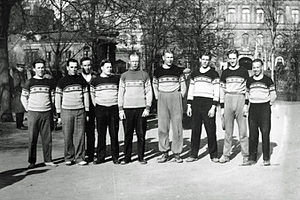 Throughout pesäpallo’s history, schools have spread the word about the sport throughout Finland. As a result, pesäpallo organisations have sought to cooperate with schools and encourage children to engage in diverse sports activities.

At present, the activities have become more focused on individuals and their needs. Sports clubs can be seen as engines driving activities that meet individual needs in a comprehensive, inspiring and diverse manner. The well-managed club activities that are based on healthy values are a great way to maintain a wonderful tradition and the best selling point in terms of public exposure.

The public figurehead of pesäpallo is the Superpesis league, which represents the top level of the sport. For a national sport, pesäpallo is nothing short of miraculous, as top pesäpallo players can compete with players of any international team sport in Finland in terms of their physical capabilities. For every role model there are grassroots-level stories of people getting involved in the community through their own efforts. The wonderful tradition of pesäpallo is being turned over to new generations on many levels at the same time.

Pesäpallo has established a strong position in the realm of Finnish sports. Superpesis is among the most popular top-level leagues, the amateur activities draw in companies and communities, the clubs, camps, tournaments and other activities for children and young people are in demand, pesäpallo schools and courses draw people in to the sport, and schools promote the game by including it in their educational offering (see http://105onnistumista.net).

In terms of regional accessibility, pesäpallo is one of the leading sports in Finland. The sport is particularly strong in small municipalities and mid-sized towns. A future challenge is posed by the country’s larger cities, where the competition for peoples’ spare time is fiercer than ever.

The trend of internationalisation has gained popularity among young people in particular. At the competitive and top level, pesäpallo lacks global reach, but the sport has highlighted the special significance of local culture as a new phenomenon. Some international colour to the sport is added through interest among tourists, the World Cup tournament held in Finland, cooperation with baseball and softball organisations, as well as new demographics, such as immigrants.

Covid-19-situation caused a challenge for pesäpallo and sport in general in Finland. There were limitations to organize bigger public events and carry out team activities. Given the circumstances of those years pesäpallo managed the difficult times very well.

Instead of staying stagnant, this traditional sport needs innovations and developments, which must be implemented with due consideration of the strength, history and philosophy of the game. Pesäpallo’s persistence in the future will be supported by the principles of equality, easily accessible hobby activities, strong local identities, diverse opportunities for engagement, and high-quality club, amateur and health-oriented activities alongside elite play.