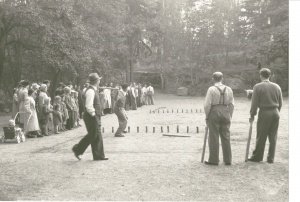 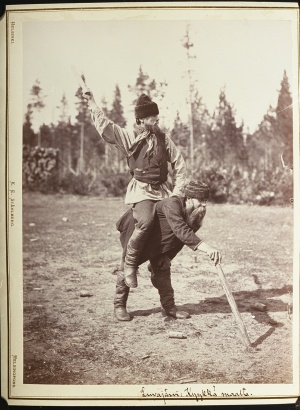 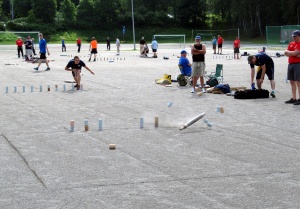 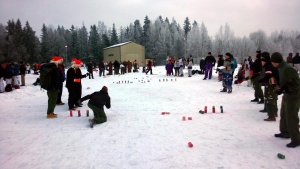 Finnish skittles is a centuries-old village game and the only national traditional game that is still regularly played in Finland. The game tradition is kept alive by, in particular, the sports association Finnish Skittles Association as well as many Karelian and student organisations. The Karelian organisations included the game in their programme in the beginning of 1950s, and in the 1960s, operations started in Helsinki spread to the whole country. Modern rules were developed for the game, which enabled organised competition activities, which are now maintained by Finnish Skittles Association, established in 1984. The association is a member of the Finnish Olympic Committee. They organise regular national competitions and are also members of the international umbrella organisation for the different skittles sports. Finnish Skittles Association has approximately 30 member associations and over 400 registered players. The various Karelian organisations have a similar number of hobbyists. Student clubs and some other student organisations started playing Finnish skittles in the 1960s, and in the 21st century interest in the sport has grown rapidly. In recent years, the annual academic Finnish skittle world championship competition has attracted a few thousand players from the different municipalities with institutes of higher education. In addition to their game activities, Finnish skittle actives organise gaming events for various communities, schools and companies and hold public events where everyone is welcome to try their hand at the game.

Finnish skittles has traditionally been played between different teams. The playing field is located on an even spot of land. Two, five-by-five metre squares are drawn on the ground as the playing field, ten metres apart from each other. The skittles are ten centimetre tall, cylinder-shaped wooden pins, which are set on the front line of each game square at even distances apart, two on top of each other. The teams throw wooden skittle bats in an attempt to displace the skittles in their home square so that they are thrown out of the square, either behind the back border or side lines The teams throw from the opposite square, where the skittles of their opponent are located. The team that empties out their own square with fewest throws is the winner.

The game result can be scored; the losing team receives minus points for any skittles still in their square. If both teams are able to clear their square of skittles during the same throwing turn, but one team uses fewer skittle bats, one point is added for each unused skittle bat. If two rounds are played, the throwing direction is changed between the rounds and the end result can be calculated by scoring the game. In a tournament with several teams, the scoring also helps find out the final order of the teams.

The scoring system developed for modern Finnish skittles also allows players to play alone. In this version of the game, the player plays in both directions and both game squares hold 20 skittles. The player receives 20 skittle bats for each square. If the player requires fewer bats to clear the square, they will receive plus points for each unused bat. However, if any skittles remain in the square at the end, they will be counted as minus points. This way, the player can find out their personal result.

Karelian societies, Finnish skittles societies and student organisations that play the game usually play once a week, and the organisations organise separate tournaments for their members. Finnish Skittles Association organises the Finnish championships as well as other national competitions for team, pair and individual games. In the summer, events at national level are organised every week around the country. In addition to traditional Finnish skittles, Finnish skittles championships are organised in pentathlon with the skittles arranged in the playing squares in five different ways. Otherwise the rules of the individual game apply.

Finnish skittles is a traditional game dating back hundreds of years, and similar games have also been played in other regions, especially around the Baltic Sea. In Finland, Finnish skittles was played at least in Eastern Finland, in the Karelia region. I. K. Inha photographed people playing Finnish Skittles in Viena Karelia towards the end of 19th century and stated that the game had already been forgotten in many areas and was only played in remote villages. After Finnish independence, the Viena Karelian people who had settled in Finland started playing the game in the 1920s and 1930s. In the early 20th century, it was played more widely in Karelia, from Ingra and the Karelian Isthmus to the Lake Ladoga regions of Karelia. It is also known that Skolts in the Sámi regions also played skittles. After the last wars, the Karelian Cultural Society launched Finnish skittles games in Seurasaari, Helsinki, in 1951, where the game has been played regularly since then. During the first years, the game was played by the rules learned in a person’s home village. However, it was soon seen as necessary to come up with official rules better suited to modern times, yet that still preserved the original key elements of the game. The old rule of playing piggyback was left out. According to this tradition, the winners were able to continue their game by throwing their bat while sitting on the backs of their crouching opponents.

From Helsinki, Finnish skittles quickly spread all over Finland through various non-governmental organisations. For many evacuees, this was a familiar game from their home regions, which helped spread the game. The Karelian Cultural Society and the Finnish Karelian League included the game in their programmes and held teaching events in different municipalities. The team championships were also started in connection to summer fairs of the Finnish Karelian League, and, at best, dozens of teams and hundreds of players took part in the competition. The championships for individual games were started in the 1960s. Today, the competitions are arranged by Finnish Skittles Association and its member associations.

Finnish skittle enthusiasts hold demonstration and training events by request and organise gaming events at schools or for associations and companies. In connection to these events, the participants receive information about the game and its history. As Finnish skittles is played outdoors, interested passers-by also often have the opportunity to try the game. The Finnish Karelian League encourages its members to play the game, for example, by including Finnish skittles in the competitions of their member associations. Finnish Skittles Association holds training events for its members. Finnish Skittles Association also attempts to promote the launching of operations in new places by offering guidance and help for purchasing equipment. In the 21st century, Finnish skittles has quickly become more popular among students of institutes of higher education. The world championships of academic Finnish skittles receives media attention, even solely based on its number of participants, which, in turn, increases the attraction of the game. Some universities have their own Finnish skittles series and it is also a part of the activities offered to new students. Many people who have become interested in Finnish skittles during their student years have also continued playing the game after graduation with the Finnish skittles association of their home city.

Similar to many traditional village games, Finnish skittles is a very social game. Between the World Wars and during the early recovery period after the most recent wars, Finnish skittles was an essential part of the identity of Karelian refugees and evacuees. Thanks to the Finnish Skittles Association and academic Finnish skittles, the number of active players has increased. It is easy to adjust the game based on the requests of the players, for example by changing the size of the field or the weight of the bats, which helps keep people interested in the game.

In order to secure the continuance of the tradition, it is important to increase recognition of Finnish skittles by increasing its visibility and providing interested people with the opportunities to try their hand at it. Supporting and advising new players and teams in acquiring the equipment required for the game is an important form of support. Maintaining national game activities is a vital commitment factor for more experienced players. The game has been developed continuously in order to increase its attractiveness. An example of this is that the rules have been adapted so that both men and women of all ages are able to play.

video on skittles in Russian Karelia

Links and other sources

a short Wikipedia description of the game

a short e-book on Finnish skittles (available in Finnish and in Karelian): Karjalainen kyykkä