Log driver skills have been a part of log driving traditions and an important part of work skills. Log driving is not practised anymore, but log driver traditions are presented in competitions (‘tukkilaiskisat’) and shows where enthusiasts from the field perform. In the summer, several log driver competitions are held all over Finland, usually in connection with other summer events. Usually there have been around 10–20 participants, many of whom take part in several sections and several competitions during the summer, which means that there are some twenty to forty active enthusiasts. Several hundred people watch the events. Sports associations and municipalities act as the background organisations and sponsors of the events. The arrangements at the venue are mainly taken care of by volunteers. Suomen Metsäurheiluliitto (the Finnish Forests Sports Federation) compiles the rules and appoints a supervisor, who also acts as the competition’s Chief Judge. 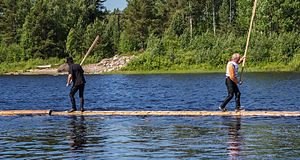 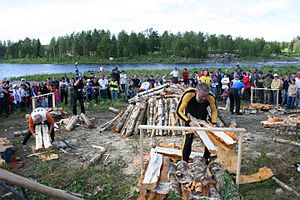 Competitions also involve other traditions such as wood chopping.

Audience of the competition.

The objectives of the competitions are to uphold the log driver tradition, which used to be an essential part of forest work, presenting the skills needed for log driving to an audience through a competition, and maintaining the physical fitness levels of the practitioners. Many competitors do not compete to win, but instead only wish to test their own abilities and strength.

The main attraction of log driver competitions is river rafting, where the participants raft through rapids while standing on a log. According to the rules, the competitor must stand on the log when crossing the start and the finish line. It’s OK to fall off the log, but the competitor must be able to climb back on without any help. Audiences love river rafting the best, but the practitioners think that the hardest skills to master are the log driver marathon and, after that, ‘sauvonta’, the practice of standing up in a boat and directing it in flowing water/rapids using nothing but a long pole. The disciplines involved in the log driving marathon are rowing, boat pulling, log running, running over a log jam, log paddling and cross-country running. Other competitive skills include rolling, the log driver’s oath and team rowing. Competitors are divided into categories based on their age and gender: juniors, general, seniors and women’s series.

Competitions are held in water areas that have been used as traditional log driving routes and where the competitions have been held before. The location's audience-friendliness and safety also influence the selection. In recent years, competitions have been held at Lieksa (Neitikoski), Ii (Raasakkakoski), Kuusamo (Käylä), Laukaa (Kuusaankoski), Ylitornio (Kattilakoski) and Kalastuspuisto in Imatra. Competitors are invited to the events held in Käylä, but other locations accept registrations. The rules by Metsäurheiluliitto are usually followed, but there are some exceptions. Before the competition, the participants are offered the chance to practice. A power plant has been built at Raasakkakoski in Ii, and the water levels of the old rapids are low, but the dam is opened during the competition and for practices. The Finnish Championships are also held every summer, and its location varies. The best competitor will receive the honorary title of ‘Kuningasjätkä’ – King of Log Drivers.

Competitions are mostly arranged by volunteers. However, a professional commentator covers the competition. Tickets to the event are sold in order to cover the necessary costs, but financial profit is not the objective; instead, the purpose is to value the tradition and maintain the skills of the trade. The competitions offer other activities as well, such as a programme for children, a restaurant, exhibitions, and so on. Log driving skills are also presented in performances. These performances have taken place, for example, at the midsummer festival on Seurasaari and other summer celebrations. In Northern Finland, where log driving was still practised in the 1990s, log driving culture is well-remembered and still alive. In the south, there are fewer practitioners of the tradition.

Competitions in log driver skills have been held since 1949. The first competition took place in Pajakkakoski, Kuhmo. The tradition was born in the log driving work areas, when timber was transported on the rivers to be sorted at the mouth of the river. Logs are no longer transported by river, but timber rafting and other log driving traditions have lived on. There have been a few female contenders, but not every year.

Many occupational accidents and injuries have occurred in log driving, and the competitions have not been completely damage-free, either. At the turn of the 1950s and 60s, two log drivers drowned in the rapids. After this, the use of life vests has been required and the number of lifeboats and rescuers has increased.

The book ‘Me tulemme taas!’ (Mauri Hast and Pekka Lanko, 2008) describes the history and present day situation of log driver championships. The authors are personally familiar with the log driving skills and they present the history vividly. There are few archives about the competitions, but the authors have interviewed the old masters, who have practised log driving work and participated in competitions.

In her thesis work ‘Tukkilaisen tulo ja lähtö’ (‘Arrival and departure of the log driver’, 1996), Hanna Snellman argues that log drivers started to appear on the streets of Rovaniemi in the 1870s. Log driving as a profession ended in the 1980s. At first, people despised and were afraid of the log drivers, but when tourism reached Lapland in the 1930s, people started to romanticise them.

Several movies have been made of log drivers, the first of which was ‘Koskenlaskijan morsian’ by Erkki Karu from 1923. Mankalankoski in Iitti has often been used as a filming location. With regard to books on the subject, some good examples are ‘Laulu tulipunaisesta kukasta’ by Johannes Linnankoski and ‘Tukkijoella’ by Teuvo Pakkala, both of which have also been made into popular films.

Some of today’s log drivers are veterans of the trade, but there are a few young people who want to test their skills. Usually about 10–20 people take part in the competitions, and often there are some new faces among them. The log driving trade is not practised anymore and it does not create new log drivers, but the excitement of the sport, its distinctive nature and the large number of rapids in Finland attract new participants, including from the cities. Instead of the old log drivers, there are now professionals from many fields who gain their log driving skills by practising them. Experienced log drivers have also made it their duty to train younger people in the skills. Those who succeed in the competitions also practise other sports all year round in order to stay fit and achieve a good sense of balance. At their best, a log driver competition is both a sport and a folk tradition. As a demanding and impressive sports discipline, they could easily succeed in the future.

Competitions are held every summer on several rapids and there have been plenty of participants, but there is a need for more young people in order to maintain the tradition. However, at the moment, log driver competitions are on the rise. Those who have participated in the competitions and their preparations are actively working to make the sport better known. It has been decided that competitions will continue to be held, at least for the next few years. Metsäurheiluliitto and Metsämiesten säätiö are the developers of the sport. Interest in the competitions has increased, there will be new locations, and there has been no lack of volunteers. There are also enough rapids that are suitable for the competitions.