Opening of the Finnish summer

On the last Friday of the school spring term, children from all elementary schools in Joensuu and from several schools in the neighbouring municipalities, as far away as Kuopio, gather at the Laulurinne music venue to sing. The event has been held for over 30 years. Children sing their goodbyes to the past school year and open the Finnish summer season officially, eyes firmly on their summer holiday. About 6,000 children sing at the event, and it often attracts as many as 15,000 visitors. The event is organised by Joensuu early childhood and education centre.

They sing about ten songs at the Laulurinne venue, accompanied by Joensuu Wind Band. In previous years, the wind instrument players of the Joensuu City Orchestra have also joined in to accompany the singers. Teachers make the event happen, and even the event’s host is a local teacher. A committee begins preparations for the event in January by selecting songs and making the practice materials. The teachers of the schools enrolled practise the songs with their pupils and make sure that they arrive at the venue, by bus or by foot. The choir does not practise together even once before the performance! 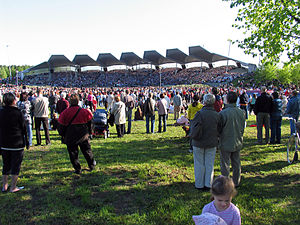 Opening of the Finnish summer in Joensuu

When a new Laulurinne, a music venue, was built in Joensuu, an idea was brought up about a song event, where all the city’s children would come together to sing spring songs. This started the Opening of the Finnish summer in 1985. The event was developed by Osmo Paalanen, the lecturer of the time in normal school, and Viljo Lehikoinen, a director of the education department. At first, the event was organised with a smaller group, but by just its second year, thousands of children were taking part.

YLE broadcasted the event on the radio, so a large number of people outside North Karelia also listened to the event. For the past two years, the event has not been broadcast on the radio, as it is shown live on the Yle Areena TV streaming service. Today, singers come to the event from places such as Savonia and Kainuu. The most distant visitors have come from Helsinki.

From the beginning, the songs have been accompanied by Joensuu Wind Band. The Karelian military band also used to accompany them for several years before the band was discontinued.

The first artist guest was invited on stage the same year a record was made of the Laulurinne songs. On the Tämä Kylä record, Niinivaara music class choirs Prenikat and Niinikat performed together with Sari Kaasinen. They were accompanied by the Karelian Military Band, lead by the conductor Juha Tiensuu. Sari Kaasinen was also the first artist guest invited to Laulurinne and she sung the song Tämä kylä (this village), composed and written by her, together with the large choir. Since then, many famous singers with roots in North Karelia have sung at Laulurinne.

Opening of the Finnish summer is an official public event in Joensuu. It receives an annual budget, with which the pupils of the city can be transported to the event in order to participate in the large choir. The sound system at Laulurinne and salaries of a small group of event staff are also paid for from the budget, but mostly the event is implemented through communal work. During the spring, the teachers practise the songs with their class with the help of background recordings. The recording is made every year under the leadership of a music teacher, and a choir of one of the schools will sing on the recording. The committee also includes a group of the City’s teachers, who will organise the event held on the final Friday of the spring term. On this day only, the school day runs from 3pm to 7pm. All the pupils have a free morning.

Many families and former pupils gather at Laulurinne to listen to the large choir. Senior citizens have also become interested in the event. The summer holiday does not start until Suvivirsi, the summer hymn, is sung at Laulurinne!

A Facebook page was established for the event in 2015, and through it, new people have found the event. The City also set up a home page for the Opening of the Finnish Summer on its own site.

In 2016, the event was renewed in many ways. Both the practice materials and communications became electronic. The programme was cut down to last as long as a standard lesson and speech, which was seen as redundant, was minimised. This allowed the song event to be all about singing. The public was also offered the chance to participate in some of the songs. The local newspaper, Karjalan Heili, published the lyrics of the sing-alongs before the event.

In anniversary year 2017, Laulurinne also celebrated the Finnish centenary. The purpose was to invite an artist guest to Laulurinne, who has a suitable Finnish song in their repertoire for a sing-along with children. The programme contained plenty of Finnish music: both old and more recent songs. A record-breaking number of visitors were expected at Laulurinne.

The community behind this submission.