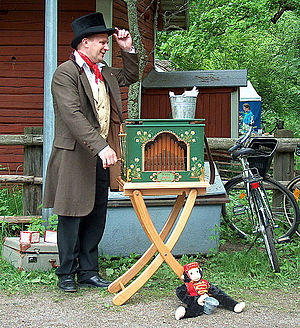 The most significant collection of barrel organs and knowledge about the instruments is held by the Kempf family, which maintains the Mechanical Music Museum in Varkaus. It is a hub for the art alongside the Suomen Posetiivarit Organ Grinders’ Association, as many enthusiasts have acquired an instrument through the Kempf family and maintain it with the help of their expertise. The majority of the barrel organs in Finland have at some point passed through the hands of Jürgen or Pawel Kempf.

There are only a couple of organ grinders in Finland who actively and regularly perform on the streets. The players listed above, along with a few other barrel organ owners, can be booked to perform at various private or corporate celebrations, openings, shop campaigns, summer events, markets and fairs, art events, theatre and circus performance, and so on. Some organ grinders even visit day care centres and nursing homes and sheltered housing units for the elderly. Organ grinders are often requested to play at charity events that require entertainment, music and some visual flair. It is almost impossible to estimate the number of total annual performances. However, only a small portion of Finns say they have ever seen a live organ grinder.

The tones of a barrel organ have been heard, for example, on the tours of Circus Finlandia and at Särkänniemi and Linnanmäki amusement parks in Tampere and Helsinki, respectively. The Suomen Posetiivarit Association has made efforts to maintain regular concert and communication activities. Barrel organ concerts at churches have been particularly popular.

In recent years, international barrel organ festivals that have also landed in Finland have gained the most visibility. The Mechanical Music Museum organised events according to the Central European model in Joensuu in 1985 and in Varkaus in 1991 and 2004. In 2007, the Posetiivifestivaalit Barrel Organ Festival Association kicked off a series of international barrel organ festivals held in Hämeenlinna. The Suomen Posetiivarit Association got involved in 2009, and the festival became further established in 2012. The event has always featured 25–30 performers from Central and Northern Europe. The festival guests have performed in various free concerts and have taken to the streets. In 2015, the event grew into the Finnish-Estonian FinEst festival, which involved some 40 performers, two countries and over 10 municipalities.

Finnish organ grinders have sought to expand their repertoire to meet the tastes of the audience by commissioning transcriptions of Finnish music for their organs. The largest collection of such transcriptions, which includes dozens of pieces, was held by Teuvo Ylitalo. Some Finnish organ grinders have also performed at international events, such as the spring meeting of the Nordiske Lirekassevenner in Denmark, the Rahvusvaheline Väntorelifestival in Estonia and the Drehorgel Festival in Berlin.

The Finnish barrel organ tradition is much more subdued than in Central Europe, for example. Finnish organ grinders rarely dress as flamboyantly as their southern counterparts and put less emphasis on their mascots. Organ grinders who sing or perform otherwise alongside grinding the organ are a rarity in Finland. Still, the instruments are mostly beautifully ornamented. Finnish organ grinders are rarely able to scrape together a sufficient stream of income from their instruments alone. 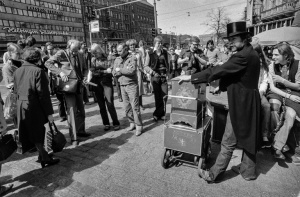 The earliest records of organ grinders arriving in Finland date back to the turn of the 18th and 19th centuries. Some of the performers from the 1830s are known by name. Originally, they mostly came from the Nordic countries or Germany. Starting from the 1840s and particularly after the Crimean War, many Italian organ grinders travelled to North America and Western Europe, including Finland, to escape the poverty of their native country. It was the travelling Italian organ grinders who cemented the traditional image of a barrel organist in the minds of the Finnish population: they were seen as poor vagrants who came to fairs or villages with their instruments on their backs and a trained monkey or other animal in tow to draw attention to the performance. Their meagre income came from selling “fortune planets” cards and a variety of knick-knacks, and the travellers often relied on charitable locals for a place to sleep. Although some of the old organ grinders had their own territories, there are records of visits across the country.

Organ grinders provided entertainment to the poorer population in particular. Young people bought fortune cards to read predictions about their future, especially on matters of the heart. On the other hand, organ grinders provided access to music, such as popular operetta pieces, waltzes, marches, folk songs and other tunes, that would not otherwise have been available, at least in rural areas. The cylinder that contained about 8–12 tunes usually also included a more devout song in the mix.

At the turn of the 19th and 20th centuries, the group that roamed cities and rural villages with their barrel organs was varied to say the least. In addition to many other nationalities, there were Finnish performers, some of whom presented themselves as clearly Finnish, while some tried to pass themselves off as foreigners. During the 1920s, the golden age of barrel organs began to fade, finally coming to an end at the onset of war. In the 1930s, organ grinders could still be seen at markets and fairs, but mostly nowhere else. The radio, gramophone and soon cinema with sound offered a far more appealing way to experience music. At the same time, rules and regulations were tightened to the extent that street musicians came to be seen as undesirables. The local authorities primarily granted performance licences based on social grounds, such as disabilities. Some of the Italians returned to their native country, while some stayed in Finland to become entrepreneurs or hire themselves out to one of their more successful countrymen.

However, the tradition of organ grinders in Finland did not die out entirely. In those days, fairground organs could be heard at Tivoli Sariola funfairs and at Linnanmäki. People all over the country recall organ grinders touring municipalities up until the 1950s. Only a few of them are known by name, including Giovanni Celaschi, Aleksanteri Tuukkanen and Viljami Sundgren. After the quiet period, the barrel organ was finally resurrected, not as the ‘beggar’s instrument’ it was referred to in the old Finnish dictionary, but as a nostalgic and fun curiosity from the past. Among others, actor Kaarle Juurela, Anton Paulomo a.k.a. ‘Posetiivari Iivari’, instrument builder Carlo Bergman, entertainer and singer Veikko Poutiainen, Teuvo Ylitalo, artist and cartoonist Heikki Paakkanen and hotel entrepreneur Markku Savijärvi acquired instruments of their own and began performing in the late 1970s or early 1980s. With the German Jürgen Kempf bringing his collection, which later grew into the Mechanical Music Museum, to Finland also played a part in the resurgence.

A few barrel organs are known to have been made in Finland, but significant quantities were never made. The history of organ grinders in Finland has been studied, for example, by researchers Pirjo Varjola, Kristiina Eronen and the late Professor Sven Hirn, instrument builder Carlo Bergman and collector Matti Piuhola. The largest pool of knowledge on the Finnish history and tradition of organ grinding is held by the historical team of the Suomen Posetiivarit Association, Markku and Harri Karvonen. They are currently in the process of exploring and recording the history of Finnish organ grinders. 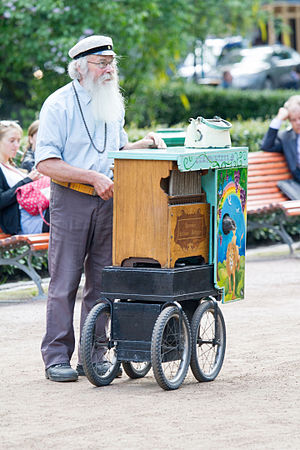 Among the most important ways of maintaining the tradition is to ensure the visibility of organ grinders at various events, the traditional media and, increasingly, social media. Similarly, it is important to emphasise the value of preserved instruments to make sure that no more of them are lost. Currently, some twenty organ grinders perform in Finland with varying frequency and style – often in their home regions. For this reason, the barrel organ has long been part of the scenery in Hämeenlinna, for example, whereas in many other towns it is an oddity.

The most notable bodies preserving the tradition are the Mechanical Music Museum, which exhibits a variety of barrel organs and similar mechanical instruments, and the Suomen Posetiivarit Association of organ grinders and barrel organ enthusiasts. The association maintains an online service, acts as a point of contact for professionals and hobbyists, relays performance requests, issues notifications and communications, collects historical data and arranges annual events. It is involved in international cooperation with European professional and amateur organists.

Existing organ grinders are more than happy to help those interested in getting started by providing advice for obtaining an organ and some music for it. They particularly enjoy performing to child audiences, partly due to the unbridled interest shown by the youngsters, but also to ensure that the younger generations gain a memory of organ grinders.

Despite predictions to the contrary, it would seem that the tradition of organ grinders in Finland refuses to die out. Compared to other countries in the Baltic region, Finland is emerging as the most active preservationist of barrel organ culture, with the exception of Denmark. The number of organs and players in Finland is relatively high. New young organ grinders rarely appear, but at times those who have reached a more mature age decide to acquire a barrel organ to play recreationally. The only limitation is the price of a proper instrument, which can reach thousands of euros.

Most modern organ grinders share a love of music and a desire to have fun in front of an audience and interact with people, but they often lack the skill to play traditional instruments that is normally required for public performances. As long as these people keep coming across the heritage of organ grinders, the tradition would seem to live on. On the other hand, the majority of the current organ grinders are in or near retirement age. If they lose interest and motivation and fail to find new players for their instruments, the organs we see today may become nothing more than mute decorations in the homes of future generations.

The Mechanical Music Museum in Varkaus.