Playing and building the Jouhikantele 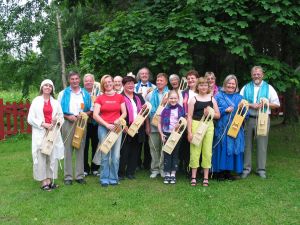 The tradition of playing the jouhikantele, a traditional bowed lyre, has lived on in Karelia and Savonia since the Middle Ages, having been passed on from generation to generation by memory. Players learned their skills from older players, or the skills were passed on in families. All six brothers of Feodor Pratsu from Impilahti played the jouhikantele. The tradition of playing the jouhikantele was continued by a single person from the 1940s onwards, and, through them, it has once again expanded into a living tradition. The name ‘jouhikantele’ comes from the way in which the instrument is played. The jouhikantele is played with a ‘jouhi’, i.e. a bow, while another instrument called the ‘sormikantele’ is plucked with fingers (‘sormi’ being the Finnish word for finger). The jouhikantele also has many other names, such as jouh'kannel, jouhikko and jouhikas. Both the kantele plucked with fingers and the kantele played with a bow were developed from the round lyre around the 11th–13th centuries. In recent decades, archaeological findings of these instruments have been made in different parts of Europe.

Today, the jouhikantele tradition is well-known in many places, as knowledge of the instrument can be gained through the Finnish education system. Training has been provided in the playing and building of the jouhikantele at educational institutions and liberal adult education clubs, such as the Folk Music Department of Sibelius Academy, Ala-Könni College, Centria University of Applied Sciences, Karelia University of Applied Sciences, Käpylä Music Institute, the jouhikantele event in Tampere, Haapavesi Folk Music Festival, Savonranta Adult Education Centre and Kihaus Folk in Rääkkylä. Jouhikantele players also provide private teaching to players who come to Finland from countries such as Japan, Canada, the United States, France and Russia.

The jouhikantele has a strong foothold online. There are numerous videos on the subject on YouTube, and the jouhikantele groups on Facebook have over a thousand members. The Internet brings both Finnish and international players together. 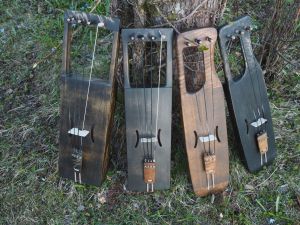 The jouhikantele is a lyre instrument played with a bow, and its roots date back thousands of years. The earliest observation of the lyre in areas north of the Alps is the image of a lyre player that was found carved into a gravestone in Hungary. It is dated to 800–500 BC. According to a theory by Timo Leisiö, the early Celts spread the lyre from the Danube to the British Isles during the first millennium before Christ, and from there it found its way to the early Germans living in the area of present-day Denmark. A lyre bridge dating back to the 8th century has been found in Gotland, and a 9th century bridge has been found in Birka. According to written sources, the lyre was referred to as crwth, cruit and crot by the Celts, as rote by the English, as rote by the French and as rotte by the Germans.

The jouhikantele belongs to the narrow main category of lyre instruments in which the pegs are located side by side on the yoke, i.e. the crossbar. The jouhikantele has strayed far from the ancient lyre, but it is very similar to the medieval Western European round lyre. When playing, the instrument is held up diagonally, and the melody is accompanied by drone sounds. These characteristics are throwbacks to the Middle Ages. 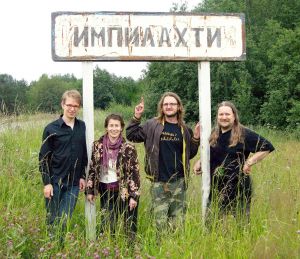 Jouhiorkesteri (The Bow Orchestra) in Impilahti in 2009. Photo: Johannes Heikkilä.

Jouhikannels are built and played everywhere in Finland. There are players of all ages. Three years ago, a Finnish-Estonian collaboration project called ‘Lasten jouhikko’ (Children’s jouhikko) was carried out in Finland. It resulted in the development of a jouhikantele design that is suitable for people of all ages. Jouhikantele playing is taught at all levels of music education, from music playschools to universities. Many schools have had the jouhikantele as a school music instrument. 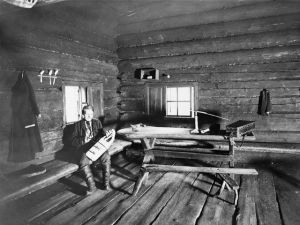 Juho Villanen playing the jouhikko by a table in a corner of the Niemelä smoke cabin of Kaukola. The jouhikko in the photo was bought by A. O. Väisänen, and Villanen did not play it again afterwards. This information, as well as the year when the photo was taken, was provided by Rauno Nieminen on 11 September 2006. Photo: Picture Collections of the Finnish Heritage Agency.

The jouhikantele is based on a plucked lyre that made its way to Europe and became a fashionable instrument of the early 11th century. This instrument was the origin of both the plucked and bowed versions of the kantele. In the 20th century, the tradition of playing the jouhikantele was continued in Estonia, Finland, Russia and Sweden by few players, but now there are players and builders everywhere in the world.

The status of the jouhikantele weakened in the 20th century, but the efforts started in the 1980s to revive the tradition were successful, and the instrument is now well-known on all continents. One of the factors that contributed to this revival was the publication of the Jouhikko–The Bowed Lyre book. A revised edition of the book was published in 1987 and 2017. A total of four editions of 2,000 copies have been printed of the Jouhikko–The Bowed Lyre book so far. The revival of the craft of building jouhikkos has played a key role in the new rise of jouhikantele playing. Educational institutions have provided opportunities to study both playing and building, but the tradition has also been promoted by enthusiasts outside educational institutions.

When the traditional songs played on the jouhikantele were collected in the early 20th century, it was assumed that the instrument would fall out of use, as it had been replaced by the violin and the accordion as an instrument that was used to accompany dance. However, when the ‘last’ players died, the tradition was passed on from generation to generation in the Lamberg family. Interest in the instrument was rekindled in the 1940s, and the 1980s witnessed a strong renaissance that has expanded from Finland into an international phenomenon.

A great number of players have studied playing independently by using printed music or the Internet. Today, there are several personal styles and techniques of playing the jouhikantele. Present-day players can base their playstyle on traditional expression, but they can also draw upon a wide variety of influences. The most important reason for the vitality of jouhikantele playing is that playing techniques and playstyles continue to be passed on by ear, as they have been since the Middle Ages. The playing tradition is passed on from player to player at various meetings and courses. 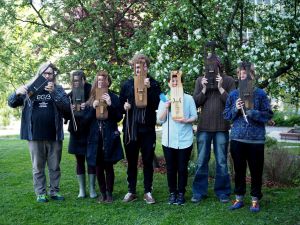 Today, various playing and building courses play an important role. Building courses have been held in Kaustinen (the Finnish Folk Music Institute), Ikaalinen (Ikaalinen College of Crafts and Design), Helsinki (Sibelius Academy), Haapavesi (Haapavesi Folk) and Tyrvää (Adult Education Centre). In Savoranta, over a hundred jouhikanteles have been built on a course offered by the adult education centre. Building can also be studied in long training programmes at the Folk Music Department of Sibelius Academy and the Instrument Building Department of Ikaalinen College of Crafts and Design. The students on the courses have included students aiming to become professional musicians, instrument builders and enthusiasts of all ages.

At most jouhikantele playing camps, learning still takes place by ear, as sheet music is not used in the teaching. Playing can also be studied with the help of sheet music. In fact, many self-taught players and students who study at music institutes have used this method.

Today, the ability to play the jouhikantele is also spreading with the help of the Internet. For example, JouhikkoJamit posts educational YouTube videos in which the best players in Finland play jouhikantele songs, first very slowly and then at the normal tempo. The intention is to provide players with jamming songs to practise at home. JouhikkoJamit and Jouhikkoklubi are a Helsinki-based community of players who organise activities by these names. There are no jouhikantele associations in Finland, but there are many free and unchained communities of jouhikantele players.

The future of the tradition of playing the jouhikantele seems strong. Jouhikantele playing is an active and organised activity, but it is also carried out in the form of free, unorganised playing and meetings of people. The preservation and development of the tradition is supported by the strong and diverse social media network that has formed around it.

Andersson, Otto (1930) The Bowed-Harp, A study in the history of early musical instruments. London: William Reeves.