Playing in the snow

The tradition of playing in the snow comes alive when the first snow falls. Snowmen and castles are built in backyards during the very first snowy hours. Playing in the snow is a sensitive, culture ecological phenomena, which came to be when the northern nature met a man that was not afraid of it. Playing in wet snow, especially, is a tradition that lives on and is passed on within a narrow marginal of only a few temperature degrees. The trends of children’s and youth culture seem to have the consequence that playing in the snow is mostly an activity done by small children. Instead, new technologies and recreational habits compete for the leisure time of older children. As play communities have changed over time, adults have become more important playmates for their children and their role in continuing the tradition of playing in the snow has become more central. 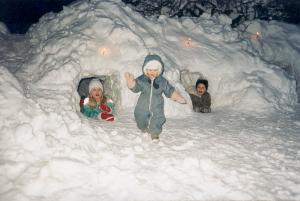 The department of folklore of the University of Helsinki researched the history and modern day of playing in the snow at the turn of the 21st century.

SNOW LANTERNS: In childhood memories, snow lantern were usually built in spots where they could be watched when falling asleep. They gave warmth and brought a sense of safety to the dark garden. Today, lanterns made with ice and garden lights have decreased the popularity of snow lanterns.

SNOW CASTLES: The first mention of snow castles can be found in the work Description of the Northern Peoples by Olaus Magnus, published in 1555. Based on the information available from the 19th century, it seems that this form of play has been a continuous tradition from the medieval times to the 21st century. The pinnacle for this tradition was after the second World War, during the golden era of yard games. When the baby boomers played in the yards of the urbanising Finland, even the snow castles became monumental. Today, the snow castles are small in size and usually groups of only a few children play in them. Nearly all Finns still know how a snow castle is made. Different kinds of igloos and snow caves are also called snow castles.

SNOWMEN: According to the play tradition collection of the Finnish Literature Society (SKS) in 1928, building snowmen was one of the most popular games of its time; with regard to its history, the participants estimated they have been made forever. The nature of this game is timeless and it may date back to the stone age; any archaeological evidence has just melted away. It seems that the snowmen did not get their carrot noses until after the mid-20th century. The colourful nose was probably the addition of some inventive Christmas postcard illustrator. It was not introduced to yard games until food became less scarce and the moral codes related to it became less strict. Building a snowman is a great activity for the whole family and it is possibly more popular now than ever.

SNOW ANIMALS: The most common snow animals are horse-shaped creatures. Children can take care of the animals for the whole winter and give them names such as ‘Ice flower’ or ‘Snow princess’. The bristle is made of spruce branches and the bridle from twine. The most important part is the saddle cloth set on the horse’s back. The creativity of making snowmen and snow animals attracts people to this pastime, as well as making things by hand, moulding snow into a recognisable shape. The dinosaur boom a few years back seemed to particularly inspire children.

SNOW ANGELS: Playing with holy symbols was probably frowned upon at the beginning of the 20th century, and people may have disapproved of making images of angels. In the worst cases making snow angels was seen as an omen of death; people were afraid that the playing child themselves would become an angel. Today, even playful adults can throw themselves onto their backs in the snow. It is nice to lie back, listen to the silence of the forest and admire the bright, starry sky. Rolling around in snow straight after coming from the sauna is something else completely. It takes plenty of self-control to be able to finish the wings and tidy the hem of the snow angel while lying in the freezing snow. 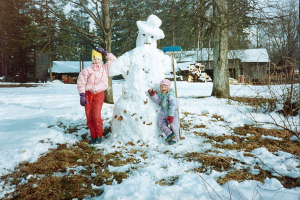 The top hat and the brush of the snow man may come from the uniform of chimney sweepers in an era when wooden houses were more common. Photo: Folklore collections of the University of Helsinki

Adapting to winter and snow is buried deep into our cultural general composition. A fun vintage tourist poster, where a snowman welcomes tourists to Finland, could be selected as the starting point. The snowman is a revealing symbol of our northern nature. We are a people of the north, at home in the midst of winter. Many of our heroes, from Lemminkäinen to President Kekkonen and from Siiri ‘Äitee’ (mother) Rantanen, a famous cross-country skier, to Kiira Korpi, a successful figure-skater, have moved around on skis or skates. We equate our northern nature to snow and the white colour of the Finnish flag. Our northern identity may seem strong today, but it is in fact gradually weakening. The impact of the climate change on culture, traditions and identity has not yet been actively considered. The focus is empathetically on the perspectives of natural science. Reflecting playing in the snow as a case of cultural heritage opens up a humanistic viewpoint for discussion concerning climate change and sustainable development.

One interesting observation is that building snowmen and snow castles is today predominantly an activity for fathers and their children. Adults say that this is because rolling and lifting large snow balls takes strength. Factors behind this change are also the freer roles of fathers and the decreasing number of same-aged playmates. From the perspective of children, adults are considered potential playmates to a growing extent. The impact of climate change on the vitality of this tradition is, for now, just guess-work. If the number of days with wet snow increases, the tradition may first even grow stronger. From the perspective of Southern Finland, the tradition of playing in the wet snow is alive and strong. The tradition is being passed on and, when watching the children, it also seems to act as a bridge-builder. It is delightful seeing children both originally from Finland and from different ethnical backgrounds building snow castles together. When the snow line is pushed towards north in the future, the culture ecological characteristics of this interface will also travel towards north: the authentic tradition will become the virtual media imagery of Christmas cards, comics, video games and other visual productions.

As a consequence of the climate change debate, the discussion about playing in the snow sometimes becomes more sombre. According to estimates, by around 2100 the zone of annual, permanent snowfall will starts somewhere around Rovaniemi. Climate change scenarios create uncertainty for the future of the tradition of playing in the snow. On the other hand, this is also an opportunity. By inspecting the northern relationship with nature and climate change through the perspective of playing in the snow, we can find a relatable, positive approach to this serious topic. At the moment, this tradition survives on its own, but, in the future, having snow in the winter will not be a certainty.