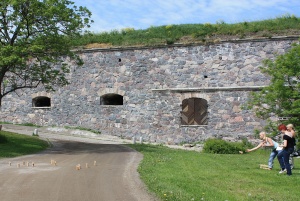 Mölkky is a throwing game known to all Finns, and is played at homes and summer cottages throughout the country and abroad. Little detailed information about its history is available, but according to common recollection, it was already played during wartime in the Karelia region. The game rose to its current popularity and became a staple of every summer cottage starting from the 1990s. Mölkky is an easy game that can be played by people of all ages and, most importantly, by teams of all sizes.

Mölkky is played actively at least in Finland, France, Germany, Austria, Sweden, Estonia, Belgium and Japan. There are more than 20 active mölkky associations across Finland.

The nature of the game is that, in addition to skill, luck always plays a part in the end result. The idea is to use the throwing pin, called a ‘mölkky’, to knock over the numbered pins. The winner must score exactly 50 points – not one point more or less. The points are counted from the number of pins knocked over or based on the numbers written on the pins. Mölkky is played recreationally all over Finland, but national and world championship competitions are also organised.

At present, mölkky games are manufactured by Lahden Työn Paikka Oy, and the majority of the production is exported to ensure that people outside Finland also get to enjoy this fine pastime. Currently most of the games are exported to France. 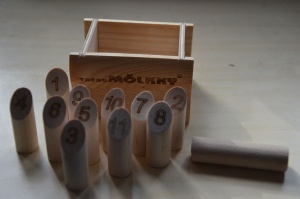 A pocket version of mölkky, in which the throwing pin is about 6 cm long. Photo: Joona1999

According to one version of its history, mölkky was derived from the centuries-old game kyykkä. The author I.K. Inha wrote about kyykkä extensively in his book ‘Karjalan laulumailla’, which was published in 1921. One story recounts that mölkky used to have a very masculine name, and that it also had a more feminine counterpart called pilppa. War veterans have said that mölkky was played in wartime Karelia.

In the Karelian language dictionary of 1983, the word ‘mölkky’ means a child’s bottom. The verb ‘mölkätä’ can be found in Elias Lönnrot’s Finnish-to-Swedish dictionary from 1874. It later appeared in the ethymological and folkloristic book of vocabulary and traditions by Iitti and Jaala with the meaning ‘to move back and forth making a sound’.

The production of the mölkky game started in the mid-1990s by Tuoterengas (a sheltered work centre established by municipalities in the Lahti region). In this context, a trademark was obtained for mölkky and registered on 30 November 1998.

In earlier times, mölkky was conveyed from one generation to the next within families, towns, cities and neighbourhoods. Since the 1990s, a variety of measures have been implemented to maintain the mölkky tradition. The tradition of mölkky competitions began in 1995 when the folk dance group Koukkurinki of the Lahden Tanhuujat youth folk dance association took part in the Kaustinen Folk Music Festival with the folk music group Pulska. While the group was waiting for their turn to take the stage, the bus driver showed them the mölkky game that he had bought from Tuoterengas’s outlet. The group was completely enchanted by the game and during their trip back home to Lahti, the Etelä-Hämeen Nuorisoseurojen Liitto union of youth associations (currently Etelä-Hämeen Nuorisoseurat ry) decided to arrange a mölkky event in Lahti.

As a result, the Finnish mölkky championships have been held in Lahti ever since. Four ten-person teams took part in the first competition. By the year 2000, the number of participating teams had increased to 41 and the competition had come to be titled the World Mölkky Championships. Currently, nearly 200 teams take part in the event and there are many international participants.

In 2000, Tuoterengas, Etelä-Hämeen Nuorisoseurojen Liitto and Lahden Kortteliliiga established the Finnish mölkky association Suomen Mölkkyliitto to promote the game and the culture surrounding it in a variety of ways. The game even has its own established vocabulary, and information is distributed through the association’s website.

Later in 2010, the name was changed to the Finnish International Mölkky Association, which currently encompasses 21 domestic member associations and five international associations. In 1999, the board of the association decided to grant the annual Vuoden Mölkysti award to persons who had done well in promoting the game. The title entails a badge and certificate of honour. The recipients of the award can be accomplished mölkky players or persons who have been actively involved in developing and/or spreading the game. The Mölkkärien Aatelisseura club of ‘mölkky royalty’ was established in 2006. The people appointed to the club have made long-term efforts to promote mölkky. As proof of their accomplishments, they receive a badge and diploma, and their names are entered in the club’s roll of honour.

At the moment, the future of mölkky seems bright and new players are taking up the hobby in many countries.