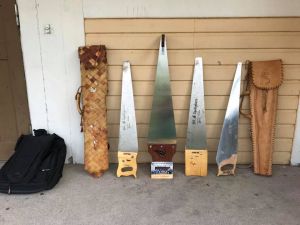 Suomen Sahansoittajat ry (Musical Saw Players of Finland) is an association for players of the musical saw. The association was founded in Tervo in 2006, and it is currently domiciled in Vihti. The association’s mission is to maintain and develop saw playing as a recreational activity as well as promote and support its development in Finland. The association organises camps, courses, concerts and competitions. It also maintains a performing ensemble that comprises members of the association and cooperates with other music associations.

The saw is played by placing the instrument at a gentle angle between the player’s knees. The sawist bends the saw into a slight S-curve from the tip and attempts to draw out sounds from the saw by running a rosined bow gently along the flat edge. A musical saw does not have hardened teeth, and its range is wider than that of a standard wood-cutting saw.

The most popular saw for playing music is the instrument made for this purpose. Serrated wood-cutting saws can also be played, but their range is much narrower compared to the musical saw. Musical saws vary in terms of the thickness and width of the blade. The wider the blade, the lower the sound it produces. For its part, the thickness of the blade determines the richness of the sound. A thin blade sounds softer and is lighter to play, whereas a thick blade had a strong sound but is heavy to play.

The musical saw is played at all types of events, and individual players are in demand for various events: weddings, funerals, birthdays and company parties. Suomen Sahansoittajat performs as a large ensemble at Samuelin Poloneesi and the Kaustinen Folk Music Festival, for example. 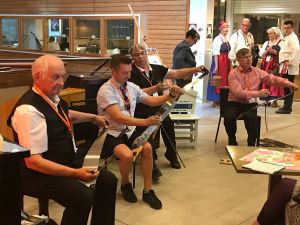 According to some sources, musical saw playing started in the Appalachian Mountains in the United States in the 19th century. However, it is more likely that the use of the saw for playing music started independently in most countries, including Europe. In addition to the United States, musical saw playing is said to originate from Argentina and Russia, among other places. The musical saw is played across the world, on all continents, with the exception of the polar regions. According to old tradition, loggers would entertain each other at log cabins in logging sites with saw playing and singing after a hard day of work. During the pioneer era in North America, poor parishes would accompany hymns with saw playing, as they could not afford actual instruments.

Tervon Pelimanniyhdistys (Folk Music Association of Tervo) held these camps at Manttu and Kolu Canal in Tervo from 1997 to 2007. In Tervo, the campers accompanied a church ceremony for summer visitors, participated in the accompaniment of poetry reading, performed at a market square event during the Tervo Days and played at an assisted living facility for senior citizens.

During the camps, the participants played folk song services or masses in their own parish and the neighbouring parish. The unexpected, accidental death of Petteri Heikkinen, the father of the camp, in 2002 hindered the arrangements of Tervon Pelimanniyhdistys for the 2003 Saha soi camp. Nevertheless, the camp was successfully held in Tervo in summer 2003. During this camp, the participants recorded a CD album called Soivat sahat, and the TV programme Ylen aamu-tv came by to film at the camp.

The individuals who participated in Saha soi summer camps between 2004 and 2006 came up with the idea to establish an association for musical saw players. The founding meeting of Suomen Sahansoittajat ry was held in Tervo in summer 2006. Suomen Sahansoittajat ry organised a Saha soi camp for the first time in summer 2007, with Tervo Comprehensive School as the location. The camp continued with the same format and introduced a saw workshop in which any attendee of a market square event could try out musical saw playing. The camp was led by Kari Rönkkö and Sami Tupala, with Unto Lehtonen providing accompaniment.

In 2009, the Saha soi camp coincided with the Finnish Championship in Musical Saw Playing, which is organised by Vesannon musiikinystävät ry. The Saha soi camp turned into a practice camp for the competition, as a result of which the following year’s Saha soi camp was held in the form of a one-day course.

The course instructors Aarne Laasonen, Pentti Kervinen and Sami Tupala taught beginners when needed, while the rest practised playing together, accompanied by Unto Lehtonen. After 2013, the course was held during the Siilifolk event in Siilijärvi and the Kihveli soikoon event in Hankasalmi and at Art House Siirilä in Vihti. Since 2015, the Saha soi course has been held in conjunction with the Kaustinen Folk Music Festival.

The long-standing camp activities have played an important role in the passing on of the tradition. Over the years, the camps have trained several dozen new players, and this group is gradually growing. Interest in the instrument has also been enkindled at open workshops.

The musical saw will most likely continue to be played in the future, despite the group of players being small. New players will join the field from the younger generation.

The challenge is running the association’s activities. The work is carried out by a small group, and it is difficult to find association activists in a small community. Long-term work for musical saw playing also requires organisation. Participation in the activities of e.g. the Finnish Folk Music Association is important, and on the other hand this work can be advanced with projects, for example.