The minuet in Finland’s Swedish-speaking areas

The minuet is also part of the programme everywhere where Finnish-Swedish folk dance enthusiasts reside – both in Finland and around the Nordic region. In the context of folk dances, the minuet is always accompanied by spelman musicians. Finlands svenska spelmansförbund and local associations are keeping up the tradition by playing solo or in groups. The minuet is a familiar dance to both professional spelmans as well as folk music hobbyists.

Minuet in the Eastern Uusimaa in 2013. Picture: Bettina Westerholm.

The minuet is in ¾ time. Its steps are divided over two bars and follow the pattern of right foot – pause – left foot, right foot – left foot – pause. The minuet is a dance for two people, in which a man and a woman dance separately yet alongside other couples. The dance begins with the men and women standing in two lines facing each other. The lines dance towards one another, over to the other side and back. The latter is called a ‘changeover’ or ‘crossing’ (övergång). During the middle part of the dance, the partners do a twirl (hoptagning). 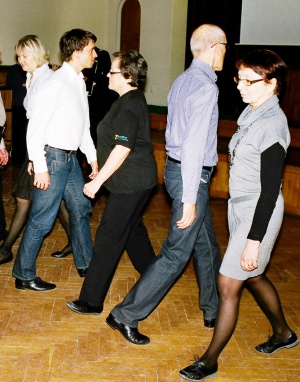 Music and dance have been moving in separate directions for a long time now. But minuet music holds a special place in the Finnish-Swedish spelman culture. Traditionally, the minuet was accompanied by the violin, either alone or with another instrument. Later, the accordion began gaining popularity in promoting the musical tradition of the minuet.

The minuet comes from France, and it is believed that Louis XIV danced the first minuet at the age of 15 in 1653. The minuet was danced in ballets, such as Ballet de la Nuit (Ballet of the Night), in which Louis himself played the sun god Apollo in a golden costume and wig. This performance earned him his moniker ‘Sun King’. Gradually, the minuet began spreading amongst high society, where it was danced by one couple at a time. It spread to the Nordic countries fast as a partner dance: the first Danish record of the dance is from 1667 and the first Swedish one from 1676. In the North, it was popular among everyone from kings and commoners.

The 18th century was the golden era of the minuet in Sweden and the empire’s eastern province of Finland. For example, when the son of King Gustav III and Queen Sophia Magdalena was born, a grand ball was held and the minuet was danced 17 times in a row, one couple at a time. The King and Queen began the dance, after which the next 16 couples followed according to rank. Admiral Carl Tersmeden described brilliantly how the minuet could be danced by one, two or several couples at a time, and how the dancers changed partners in mid-dance so that each woman would dance one round with each man.

The minuet has also been danced in Finland’s Swedish-speaking countryside since as early as the 18th century. In some of the Ostrobothian parishes, such as Vörå, Oravais, Munsala, Jeppo, Nykarleby, Lappfjärd and Tjöck, the minuet remained the most popular dance late into the 20th century. It was danced at parties as a ceremonial dance, but also as a common everyday practice. A ceremonial dance refers to the first dance that certain people perform with a bride or a newlywed couple, following a specific order. During such dances, people could change partners so that every man would dance with every woman for one round. 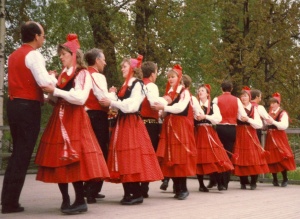 After a ceremonial dance, all the wedding guests were free to dance – minuets of course. In the 1930s, the guests would dance as many as 30 minuets on the first day of the wedding, and even more on the second. In the 1950s, as many as 15 minuets were still occasionally danced at weddings. Spelmans could play a huge number of minuets. According to some sources, they never repeated a melody twice during a wedding.

The tempo of the minuet varied, depending on whether the dance was ceremonial or intended to be danced by everyone. At common people’s weddings, the minuets were slow, sophisticated and elegant. Spelman Erik Ebb from Lappfjärd (born 1814), who could perform 40 minuets, explained that during the mid-19th century the minuets became so slow that young people had trouble learning the steps. In comparison, the minuet danced by the common folk during the 18th century as an everyday dance was light and quick with short steps. In the early 20th century, some Ostrobothnian villages began adding skips to the minuet, by either skipping throughout the entire dance or using normal steps during the first half and then moving in a hopping motion for the second half.

Dance evenings that are open to all and focus mainly on the minuet are being organised in Ostrobothnia. The minuet is also being regularly danced by all folk dance associations. Minuet music is taught at ensembles, courses and workshops. Minuets are being played both at performances and spontaneously at festivals, for example. Many areas of Swedish-speaking Ostrobothnia, like Tjöck, Lappfjärd, Oravais, Munsala and Jeppo, have their own local variant of the dance. In such areas, traditions are kept alive by dance and spelman associations. Against this background, Jeppo’s distinctive minuet is of particular interest, because in Jeppo the minuet tradition is actively being passed on to the younger generations, for example by the folk band Jepokryddorna.

The minuet melodies pass on from one player to another as oral heritage, both within the spelman associations and individual player groups. Courses and workshops are organised for the spelmans and musicians. The tradition is being safeguarded and passed on to the younger generation partially though music schools and conservatories, universities of applied sciences and Sibelius Academy.

Researchers and archives kept meticulous records of the minuet during the 20th century. Dance descriptions, sheet music and recordings have been published in various formats. This type of material offers a wide range of opportunities for current practitioners.

Avid practitioners hold the key to preserving the minuet as living heritage. The bordsändskavaljer leading the dance also has a vital role in the preservation of the minuet. The tradition will remain alive only as long as there are bordsändskavaljers in the traditional minuet villages. In the past, people would learn the minuet as children. Today, efficient measures must quickly be taken in the form of resources and active practitioners to get children to learn the minuet at schools, hobby groups and other places. In its systematically organised form, the minuet is guaranteed to survive as part of folk dance associations’ programmes.

But to maintain the vitality of the minuet tradition’s other aspects as well, information on the importance of the dance to Finnish-Swedish culture must be supported and distributed. This means that children and young people will form one of the main target groups that should be introduced to the tradition early on through the music instruction at schools and hobby groups. Within the Finnish-Swedish spelman tradition, the minuet should be highlighted in particular through activities intended for young people, including folk music camps and music courses. Combining music and dance in these contexts is necessary to emphasise their natural coexistence.