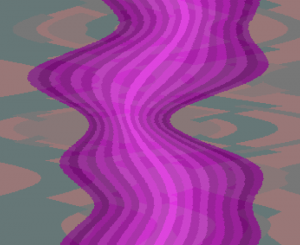 The demoscene is an international community focused on the creation of demos, creative real-time audiovisual presentations that combine skillfully crafted software, graphics and audio (see the pictures and links for some examples). Demoscene members, or demosceners, can be found almost everywhere in Finland. Because of the informal nature of the community, it is hard to estimate the exact number of people involved, but in Finland alone it is safe to talk about at least several thousand people. Some of the participants who are still active have started as early as the mid-1980s. For quite a while a typical scener used to be a young male, but over time the demographic constitution has become more diverse than that.

The Finnish scene consists of hundreds of individual demogroups, with multiple members in each, that come together for various events throughout the year. It has close connections to many Finnish game companies, in particular most of the oldest ones. While heritage institutions like the Finnish Museum of Games are increasingly interested in the demoscene, it has so far been responsible for preserving its own heritage, but also for keeping the intangible elements of its culture alive.

The demoscene has been particularly active in Europe, but enthusiasts can be found all over the world. The Finnish scene (or “skene” for short) is a unique subscene with its own local particularities, such as slang and folklore. Deep dedication characterizes many members of the scene, as was revealed by the survey conducted in 2019: the scene was described, for instance, as “Life”, “Creative minds showing their true passion” and “One of my reasons to live”. Social aspects, such as long-lasting friendship, also came up in the survey.

As the name of the community suggests, the demoscene largely focuses on demos, but there is a great variety of other digital artifacts created by the community: tiny demos (known as intros), music, visual works, videos, magazines (diskmags) and also games. These artworks are distributed free of charge, originally on floppies and later on through various online services. The works are reviewed, ranked and discussed on various media which, likewise, have evolved from physical to digital and, eventually, Internet forums. 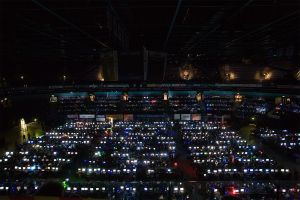 A view from the Assembly 2006 party place, Helsinki. Photo by Susanna Viljanmaa.

Competition is at the heart of the demoscene. Various competitions, or compos (Finnish: compot/kompot), where people can showcase their skills in programming, drawing or musical composition – to name just a few – are an integral part of the culture. A typical competition has one or multiple organizers, anyone can participate, and the final rankings are decided by a public vote. Most often the competitions go hand in hand with parties, scene meetings that can range from informal get-togethers to large events with thousands of visitors. Assembly, the digital culture festival held in Helsinki, started in 1992 as a demo party. Smaller parties are also organized regularly: Zoo (Akaa), Graffathon (Espoo), Instanssi (Jyväskylä), Simulaatio (Joroinen), Vortex (Tampere) and Vammala Party (various locations) are some examples of current events, with attendance figures for the bigger events numbering in the hundreds.

Most often demos are created by a team consisting of a few people working in close collaboration. Commonly, the team includes at least a programmer (coder), a visual artist (“graphician”) and a musician. The programmer creates flashy real-time visual effects which, together with synchronized music and two- or three-dimensional graphics, constitute a demo. Thus, creative programming is not the only required skill: musical composition, drawing, 3D modeling, and more human-oriented abilities, such as coordination and teamwork are essential, too. In many respects the process resembles that of games or other new media productions, and several demosceners have become professionals in the industry. 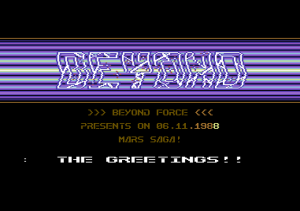 The demoscene came to be in the mid-1980s, when affordable microcomputers started arriving in homes. In Finland, different home computer models from Commodore, such as the VIC-20, C-64 and Amiga, were particularly popular and shaped the local computer hobby greatly. Games were probably the most popular use for home computers, but programming was also important during the early years. As hardware and software improved, it soon became possible to draw images and compose music at home, too.

Digital games were easy to copy using tapes and floppy discs, which gave rise to game piracy. The removal of copy protections, or cracking, was done by hobbyist groups that also placed little digital “business cards” at the beginning of the games they distributed. These so-called intros often featured impressive programming tricks, group logos, music and greetings to other groups. Many of the practices originating from the cracker scene, such as groups and the use of handles, remained when the two different strands, software piracy and the demoscene gradually drifted apart over the course of approximately ten years. At the present time, these two worlds, the demoscene and online piracy, are already far detached from each other.

The first Finnish parties and groups emerged in the late 1980s with the popularity of the Commodore 64. The peak of the Finnish scene and the demoscene in general was reached in the 1990s, when parties grew larger and the level of activity was at its highest. Nowadays, in the 2000s, the demosene has still kept going, adopting new technological platforms as they appear. The popularity of old machines has been on the rise again, and demosceners have been active players in the retro circles, creating new software, hardware and literature. Many Finnish authors and productions have received international acclaim within the community and placed well at notable competitions. 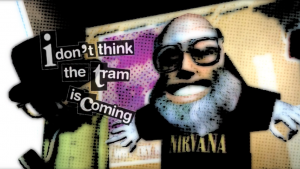 ix by Moppi Productions (2003), a 3D accelerated demo running on a Windows PC.

Before the Internet age, knowledge about the demoscene was largely spread by word of mouth among friends, and by sending letters and floppies to contacts (swapping). Finnish demogroups have most often been local, originating from both large and small towns all over the country. The scene started actively using electronic communications early on, first in the form of Bulletin Board Systems (BBS) accessible through a modem. These days, the Internet serves as a vast platform for discussions and for archiving the artifacts.

The scene started chronicling its own history already in the early 1990s, when the community was still in the process of defining itself. These early histories, coupled with shared lore, such as party reports, were necessary for building a self-aware community with a feeling of belonging. In the 2000s, researchers, many of whom are past or present demoscene members themselves, have also started studying the scene, thus increasing the visibility of the phenomenon in the academic context. In addition, some popular books have been published on the subject, providing another way of preserving history and making it accessible.

Parties are an important venue for transmitting the tradition to new members: participating in competitions, getting to know others and learning the shared practices are necessary parts of becoming a demoscener. Even if the community was originally secretive and exclusive, the attitudes toward novices have become increasingly welcoming of late, with the Instanssi and Graffathon events particularly profiled as beginner-friendly.

With its more than 30 years of history, the Finnish demoscene is one of the oldest extant branches of digital culture. What started as an exclusive movement of mostly adolescent boys has over time grown to be an increasingly diverse and inclusive community. Parties are organized regularly, new productions are created, and online discussion forums are in active use. The rising, nostalgia-driven popularity of retro computing has brought back inactive past sceners who didn’t participate for years. That said, the current huge variety of digital culture poses challenges to the demoscene as well: how to get noticed and lure new members in?